Just to make sure the Armani-wearing, highly-paid boobs MBAs who thought DRM was a great idea never get hired anywhere, ever again. And so we can point to them and laugh uh… make an example of them learn from their honest and well-meaning mistakes.

They got to where they are because they made customers feel like they had a nice, simple, effective way to brew - a better experience than the old way. Then they promptly removed all the reasons why people liked them.

I’m tasting a strong sympathy-deficit with a delicious aroma of schadenfreude.
Keurig brought this on itself by attempting to strong-arm customers with DRM.

Making coffee really isn’t that difficult, and they’re are so many open methods.

Even on a rough morning I can move a spoonful of ground sunshine from container to device, and bring water to boil. Nobody owns my fix!

“It seems rare that customers so brutally punish a company for its
hostility to them—especially when they are addicted to the product.”

People are addicted to coffee, not to Keurig pods.

It seems misguided to point the finger only at DRM. GMCR was diving before the “Keurig 2.0” system that introduced their half-assed attempt at DRM. Sales had been going downwards before that, as the original product hit market saturation, and there was no built-in obsolescence to force customers to move to the next platform.

They’ve been cutting jobs left and right for over a year, this was utterly expected news here in VT.

Arguably, the DRM was probably a reaction to the existing problem, the market saturation that you mention; but it can be singled out for failure in that, had it succeeded, Keurig would still have been selling substantially less hardware; but would have gained greater leverage over the sale of consumables, which is the side of the business where demand is steady or growing, and margins are potentially pretty good.

Had they never reached hardware saturation, they might never have needed to get greedy about consumables; but the DRM clearly didn’t give them the leverage over the consumables market that they wanted, and may have further soured the already tepid prospects for the ‘2.0’ hardware.

It seems like people never learn that unlimited growth is a cancer strategy, and you should really plan for a graceful transition.

I just don’t understand why somebody would want one of these in their home. For an office environment, the simplicity of cleanup, ability for everybody to choose different varieties for single servings, and the fact that the coffee is fresh make it a reasonable product.

Are you John Sylvan? 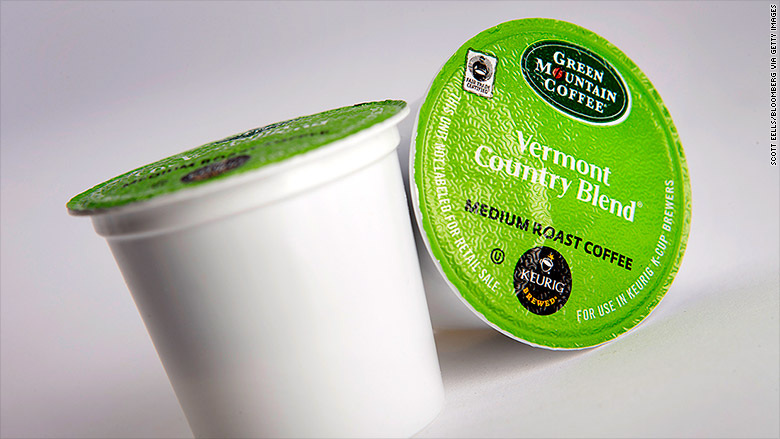 Inventor of K-Cups regrets the idea

The inventor of Keurig K-Cups has a big regret: that he invented them.

especially when they are addicted to the product.

Everyone I know who uses Keurig either stockpiled the ‘old’ pods or gave up and bought a Mr. Coffee. Even without the DRM disaster, there’s a bit of social stigma attached to using Keurig pods, and a lot of people seemed to regret buying into such a wasteful, expensive system; the new 2.0 system was their cue to GTFO and start making a pot of drip in the mornings, like old times!

Perhaps for the very same reasons somebody would want one in an office environment? The first Keurig I used was at an office – then I knew I wanted one for home. I don’t use the plastic k-cups. I appreciate the brief preparation time, fresh brew, and simple cleanup even at home.

If anyone would like to brutally punish me by reducing my profits to $500M/yr, please respond. I’ll send my address so you can send the check.

I don’t understand why anyone would want a Keurig.

When I want coffee all I have to do is get out the hand-blown glass Whazzamatic, fold a piece of fresh parchment into a cone, measure out my coffee beans, grind them in my hand-cranked burr grinder for three minutes and thirty seconds, place the coffee into the cone, get out the kettle and scientifically calibrated thermometer, heat the water to 230.5°F, carefully pour the boiling water over the Whazzamatic at the proper flow rate, and I have my morning cuppa!

Exactly as fast and easy as using a Keurig.

Well, freshly BREWED…but it sounds like you an I agree on what an improvement freshly GROUND is.

I take that back. I could have my pressure cooker up to that temp with a quart of water in about 90 seconds.

My grandmother uses one because her arthritis makes it difficult to operate more complicated machines, and she frankly doesn’t drink much coffee. Easily dispensing a single cup ever few days is about all she needs and all she can handle. My folks use one because my dad is a giant spaz who can barely make himself a sandwich, but he drinks upwards of 10 cups of coffee a day. After years of dumping rapidly staling or burning pots off coffee down the drain because he needed coffee constantly to hand they switched to the Keurig. It helped him cut back (he’s no longer drinking excess coffee just because its there) and he likes that the coffee is always fresh. The folks won’t use the Keurig cups or upgrade to a new machine. They buy biodegradable cups from a decent coffee company or use a filter adapter. The biggest problem with the quality of the coffee out of these things is the low volume of actual coffee in the cups, the good 3rd party ones have at least 3x as much actual grounds in the pod. G-ma got stuck with a 2.0 after her old one broke. And fucking hates it, we’re trying to find one of the defeat devices that were included with the folks good 3rd party coffee to set her up with.

here was no built-in obsolescence to force customers to move to the next platform.

My biggest problem with them, and the reason I’d never buy one (aside from being more of a tea guy) is that they routinely break on something like a 2 year time line. My folks are on their 3rd unit in 5 years and its starting to have problems. They’re desperate to keep this one working so they can avoid a DRMed unit. These things are just shoddy, and while they’re liberal with the warranty replacements I don’t know a single person who hasn’t had to acquire a new one regularly. Many of them opting to buy backstock of older models to avoid a free machine with the DRM.

Exactly. Drug users are loyal to the drug, not the dealer.