This is a wonderful tool for kids or people who hate vegetables. We make a zucchini noodle pesto everyone loves. The secret is to saute the noodles, not boil. Easy to use, versatile. We love ours so much, we give them as wedding presents.

What is “raw marinara”? Surely it’s not just…cold marinara?

A mandolin does the same thing for the same price plus more besides. Get one and a kevlar glove so you can ditch the holder. Those never work.

SUPER-AWESOME… once you realise how not to inflict the equivalent of three quick, deep, knife cuts, half a centimetre apart on the end of your thumb.

Seriously, the early blood sacrifices are worth it to learn how to use them. Grated carrot in a salad? Bah no texture!

Not sure if you’re joking, but a mandolin is something like this: http://www.casa.com/p/oxo-good-grips-v-blade-mandoline-slicer-239157?site=CA&utm_source=Google&utm_medium=cpc_C&utm_term=ZZP-228&utm_campaign=GoogleAW&CAWELAID=1309131268&utm_content=pla&adtype=pla&cagpspn=pla

Not sure if you’re joing, but a mandolin is something like this:

I was joking in that I found out that it’s a type of slicer before I posted the comment, but I actually was confused and thought @jandrese was referring to the musical instrument at first. So I decided to share my ignorance.

Yes and no. Your preference really. My wife and I own one And use it to replace pasta/spaghetti in some dishes. It’s much easier to eat a long strand twisted on a fork vs attempting to shovel short sliced segments, IMO.

Wife and I bought one and use zucchini in place of spaghetti with tomato sauce, ground sausage and mushrooms. If prepared correctly (we salt the strands for a bit to remove some water, then heat/cook the sauce/meat/mushrooms, then throw in the zucchini strands at the end to heat (not necessarily cook) ) you can’t taste a difference and the texture is really similar.

Also much healthier - a TON (1-1.5 medium zucchini per serving) Of veggies in place of the pasta.

Looks cool, Xeni, I remember your original post about it and was intrigued then, too. But I just have one question: does this gadget render the entire vege as spirals, or is there some kind of waste?

The one I has leaves a Cylinder of unsprialed veggi. If you look at the cutting plates pictured…there’s a mounting cylinder of metal above the cuting surface–that’s where the veggi mounts.
No big deal for most things it’s a handy snack.

I may end up getting one of these as a keto alternative to spaghetti; apparently using daikon works real well.

This post makes the incorrect assumption that I have or would ever have “paleo pals”.

This isn’t really what you asked for, but I couldn’t resist. This is a groundhog eating the long pasta-like peelings from a spiral apple peeler. He is enjoying it, but his friend in the tree is more skeptical. The pile of pasta was gone in a few hours, I think they had friends over. 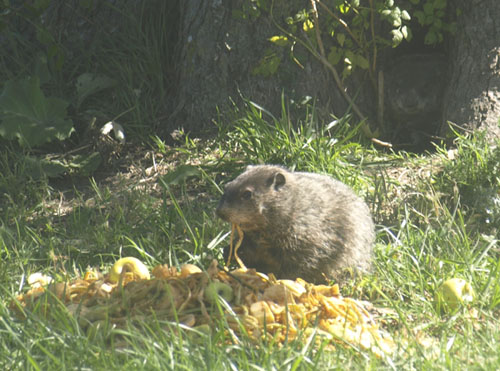