The picture makes it look kind of awkward. Is it really superior to just tossing it in a food processor or running it over a mandolin? Sure you’ll get individual shreds instead of one looooong noodle, but is that a problem?

Those are great for making your radish garnishes, or carrot threads for Sushi or Sashimi at home.

And threads of potatoes warped with a bit of cornstarch to act as glue and wrapped around a fish and fried on both sides; having it a long ‘noodles’ makes it easier to wrap and hold it’s shape when in the pan.

I do not own a food processor, and don’t have a mandolin. There are other tools that either cost more or require different skills. This is the tool I felt like thirty bucks or so was well spent on. But yes there are other ways to do what I’m describing here.

It’s not awkward, no.

That’s a neat gadget, but I’m looking at that and thinking “lathe”. Hand-turned vegetable goodness.

I love this thing! I found out about old fashioned hand-cranked apple and potato peelers when I was a kid hanging out in antique shops, but I never knew that this spiralizer thing existed.

We would have had great fun with one of these when our son was little - or even now that he’s grown, if he were still living locally. I think that a fruit and veggie noodle salad would be great!

It’d be neat to make “pasta” out of fruit, like melon, pear, or apple. That’s a cool idea.

The Drawback of a Mandolin is each and every one of them requires a blood sacrifice at one point. Yeah, I know your supposed to use the guard every time…and if you do it’ll still jump up and bite you from the dishwasher.

and don’t have a mandolin

Surely you have a ukulele though.

I’m going to assume that a mandolin is not what I’m picturing.

Do you have a potato ricer? If you squeeze ice cream through that into noodles and top with a rasberry jam you can make a desert spaghetti. http://www.staceypageonline.com/wp-content/uploads/2012/07/spaghetti-ice-cream.jpeg

Top with shredded white chocolate for the cheese.

Hey! it’s a treat not a life style.

They scare me! This device scares me less.

O yes. How many people have worked fast food, and run afoul of the tomato/onion dicer, or the cheese shredder?

Great for making Som Tum when you can get hold of a Green Papaya. Mmmmm. Som Tum.

I just made my first sacrifice to my new Microplane grater last night. Stupid cuticle.

But this is another use for the tool. Other uses for the potato ricer (It’s basically a very large garlic press device with really big holes) is making Cole slaw. Salt your cabbage and squeeze out the water after it sits with the rice and rinse in the ricer. That saves on towels.
Or Squeezing out moisture from thin sliced salted cumbers without using lots of towels. Great for Sunomo Japaneese salads, or the one I use the most. Squeezing out water from frozen spinach that’s lightly microwaved…or even boiled fresh spinach; for use in Japaneese dishes, or white pizza.

Basically any application where a ‘press’ with large holes would be used for salted and rinsed veggies. Or for it’s original purpose “ricing potatoes”.

Humm…I can see that being used to squeeze out your fermented veggies…(to get rid of moisture) and then turned into crab cake type things with flour/egg etc. Maybe even higher protein cakes with sardines, trout, or other fish. Or Well…I’m going on too much here. 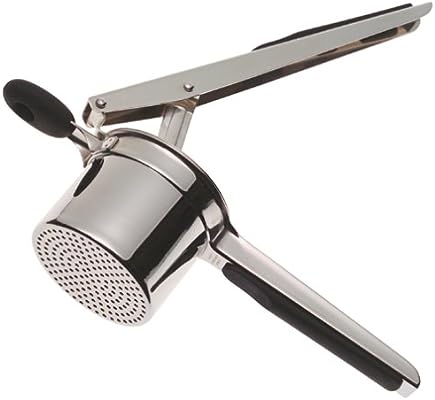 The OXO Good Grips Stainless Steel Ricer is designed for making smooth, fluffy mashed potatoes without breaking a sweat. A non-slip knob holds the Ricer in place over a bowl or pot while the soft, com ...

My grandmother had one of the old school cast iron spiral apple slicers (which I’m surprised to see are apparently widely available for less than this plastic dealy). It was wildly impractical for regular use, but when you were pealing a couple hundred pounds of apples for vast quantities of apple sauce it was pretty necessary. Especially if you wanted to avoid slicing and coring. I would imagine this might be a little more reliable, and less finicky for frequent use. What with having a fixed, mandolin style blade. The little traveling blade on the old school ones was a bit shakey, but it did let you make curly fries.

Apple peelers are not the same as the posted device.

Apple peelers. (and that’s what I’m thinking your speak of here) are designed to spiral cut the only the outer skin of a apple–it peels an apple with a device that only goes in a few mm to take off the skin. And some devices had a coring option, and you could run the apple through a few times to threads.
The posted item doesn’t simply take off the skin of a veggie…but is more a lathe. The threads are taken out of the inner part of the veggie.

Yes the basic apple peeler just ran over the outside and took off a very thin layer of skin. But the one my grandmother had (and as near as I can tell many of the ones I’ve seen since) were capable of a few different things. My grandmother’s was set up with two blades, the standard one that shaved off the skin and a separate one that sliced the apple laterally. So you ended up with a pealed apple that had been sliced into a spiral the full thickness of the fruit to the core. You were basically peeling, slicing, and coring it in one go. There was some way of adjusting it or changing the blade (I was young don’t remember) so that you could take one pass to just pull off an ultra thin peel, and if you wished take another pass to take off thicker spirals of center flesh (suitable for curly fries) with multiple passes.

My point was this thing seems far more practical for daily use (and way less finicky, the apple peeler wasn’t pleasant to use). But as I would apparently need to peel and core anything I put on it I wouldn’t want to be running a 10 tree orchard’s worth of apples through it. That’s down to the fact that it has fixed blades mounted to plastic plates and the fruit/veg is pushed into/through it. Like a mandolin, rather than the traveling blade of the apple peeler. I don’t like plastic kitchen tools, but more moving parts is usually a bad thing. Same ideal though. Spin fruit/veg into blade (we did a lot of beets too, could do them raw saved time) usable flesh results.