Originally published at: US FEMA's aid instructions translated into "Alaska Native languages" that turned out to be gibberish | Boing Boing … 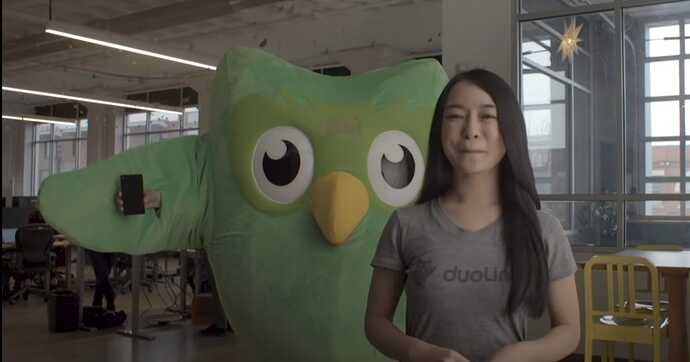 Duolingo Turned Me Into a Monster

That green owl took me to some dark places.

Ok, I thought it was weird when one of my lessons this week started talking about the witch (die Hexe) and what she likes to do.

This makes me glad I’m not into the leagues, though.

so, last night I read Asterix et la Transitalique, which is about a Chariot Race in Italy. (Not as good as the original comix, but I’ve already read those in translation)

The villain of the piece is a masked rider called Coronavirus. 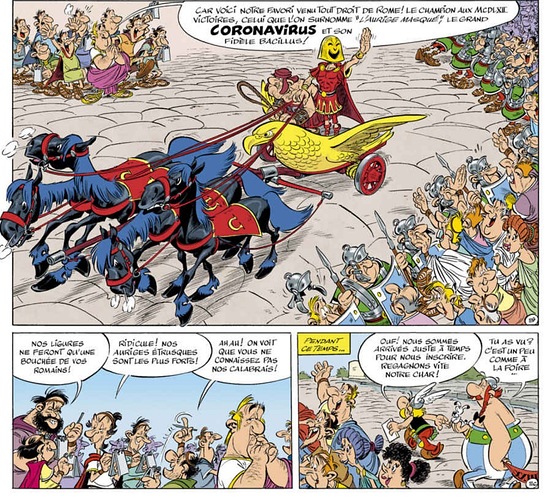 The book was published in 2017, before COVID-19 took over the world, and Coronavirus referred to something like MERS or SARS.

I was super into the leagues for a while to where I was doing things just to get as much points as possible rather than trying to learn. It’s hugely addictive and they do a really good job with gamification. But lately I’ve become pretty disillusioned with Duolingo and the quality of its lessons - I’m there to learn, not get imaginary internet points. I’ve also given up on the leagues and have plummeted in standing as a result, and, whatever, I’m cool with it.

While on the topic of poor quality lessons, Duo loves to pull shit like this with Japanese:

For whatever reason it sometimes splits up/combines things in the word bank in weird ways. In this case the は is a particle and should be on its own and the こ should be 強い but written the way it is, it makes it look like はこ is a word of its own. It’s just confusing and unnecessarily difficult to parse.

It serves no useful purpose other than making mistakes much more likely to occur.

As far as I know this only happens with Duo’s Japanese lessons.

Also Duo has basically given up trying to teach anything anymore in Japanese. Every time I advance a level, it’s now just “here’s some phrases…. remember them”. And then it pulls shit like this with zero context or explanation:

This was a complete WTF moment because up until this point there wasn’t a single lesson or mention about the informal “plain form” which is more or less “hey remember all those rules we’ve been teaching you for the last 25 lessons…. just throw them all out the window.” 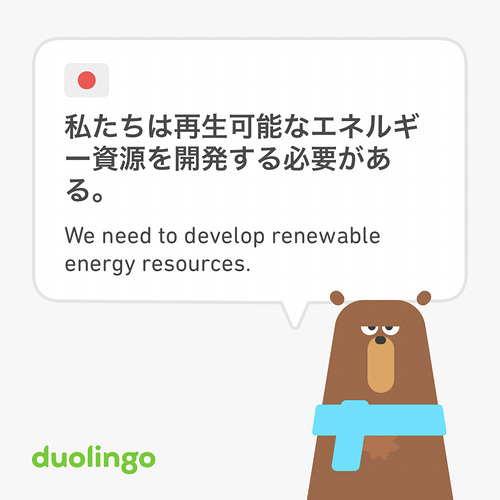 Which… just… why? What practical purpose does this serve? And this sentence is really difficult to grok.

The word for strong taste is 濃い (read “koi”), so 濃すぎます means “too strong” in this context. At a certain point, Japanese becomes harder to read without kanji than with.

It serves no useful purpose other than making mistakes much more likely to occur.

I say that about the odd exercises for writing German phrases in English. The “correct” response tends to be something no native speaker would ever say. If I heard someone say what the system seems to want, I would be surprised.

Every time I advance a level, it’s now just “here’s some phrases…. remember them”.

In German, it seems to be stuck on travel, tourism, shopping, and dining. The vocabulary choices for shopping and food seem to be based on teaching specific sounds more than phrases that make any sense. For example, it spent a lot of time on suit jackets, T-shirt sizes, cake, and fruit salad.

I prefer the stories, but now access to them is difficult. They also eliminated going through each one twice, in slightly different ways. That was very helpful in remembering new phrases, so of course it had to go.

This is precisely why having the kanji would have been useful. Not this weird and nonsensical crap they pulled here. It doesn’t happen often but when it does it’s absolutely infuriating. (Also Duo has been using 強い up until this point as “strong” in this context “strong wind”, etc. not yet introducing 濃い which may be a reason it didn’t show the kanji which is still dumb in the “let’s give you a syllable for a word we haven’t taught you yet in this weird way and not show you the kanji because we haven’t taught you yet” sense.)

They also eliminated going through each one twice, in slightly different ways.

I really hate how the stories have been gated. I’m almost to my first story on the new path and it’s taken almost six months to get there. With the old tree they were there almost immediately.

Tbf, cake is an important part of German culture…

cake is an important part of German culture…

Gotta prepare for lots of Apfelkuchen und Apfelschorle before my first trip!

Has anyone here studied two non-native languages at the same time? If so, did it work out well or was it too problematic to continue? I’m currently learning German, while maintaining French and Spanish through conversation group practice sessions.

Now I’m considering adding Italian. That’s something I can already understand, but not speak or write (aside from musical and food references).

Anyone who has been through a Lithuanian school program would qualify. The first foreign language is compulsory starting from grade 2 (age ~8), the second starting from grade 5, and then for grades 11 and 12 you can choose to stay with the two, drop down to only the first, or even start a third. For me, English was the first, Russian the second, and I dropped Russian on grade 11. Didn’t learn a lot of Russian, but that’s not because it was too overwhelming.*

I wouldn’t call using Duolingo “studying” (at least, not with the level of effort I’m putting into it), but I’m currently juggling between Ukrainian, German, Hebrew and French courses while occasionally going back for a quick practice round in Polish or Latin that I’ve completed previously. I have very modest goals for each of these (basically, being able to read just enough that I wouldn’t be entirely dependent on machine translation), so that also helps keep the mental load light. If anything, learning many languages actually makes it easier - you become more aware of the commonalities between them and see how they fit together.

* It has to do with the weird status of Russian language in Lithuania. Throughout the Soviet era, Russian was compulsory in schools, so all adults who went to school before 1990 are reasonably proficient in it. There is also a sizeable minority of native Russian speakers, especially in the cities. This creates situations where a single classroom might contain some kids who speak Russian natively at home, some who pick up the basics from playing with Russian friends or watching Russian TV, and then there are some (like me) who get to start from scratch in grade 5. And the school might think that hiring a native Russian speaker as a teacher is a good idea, even if she never learned to speak Lithuanian properly because hey - all Soviet-taught adults speak Russian, so why bother? That was not a good learning environment.

I have studied many languages, and used multiple (literary) ones simultaneously, and one of my daughters is truly a polyglot, and based on that personal experience I would say: it entirely depends on how YOUR brain works. Some people do great with it, and some can learn many languages but need a dedicated initial learning period.

Another point from personal experience: children who grow up with 2 or more native languages in their home take longer to start speaking, but once they do start speaking they already know which language to speak to which person.

So even when a human brain is at its most elastic and sponge-like, it takes a while to figure out how to separate each language into its own mental space.

It has to do with the weird status of Russian language in Lithuania. Throughout the Soviet era, Russian was compulsory in schools, so all adults who went to school before 1990 are reasonably proficient in it.

You’re reminding me of many years ago when a friend from Cuba (engineering PhD, so no dummy) was stumbling a little with her English and feeling frustrated so I said “don’t worry, since English is your second language it’s going to happen occasionally” and she looked at me and said “third, after Russian”. Took me a moment. I’m like: why would you learn Russian in the Caribbean? OOoooohhh!

did you learn about Currywurst too? All the german educational materials seem to mention it, and yet the only one that seemed to give a satisfactory explanation was Andre Klein’s Cafe in Berlin

I took French and German while also taking English and Irish. Fun! I didn’t think it very difficult to manage but I was a teenager so I guess that helped.

I dropped French after four years mainly because of the teacher. Kinda wish I stuck with it but I already had a full course load. I kept up German through high school.

did you learn about Currywurst too?

Thanks @bucaneer, @chgoliz , and @NukeML too, for the input and advice. I’ll give it a try and test after a month to see if any critical information has been pushed out of my brain.

The last time I struggled with “language overload” was in college, when I tried German at the same time as Spanish and French. I started having trouble remembering words in English, and only French would come to mind when that happened.

At least now I have online translations for help, instead of those little French/Spanish, French/German dictionaries!