Continuing the discussion from Lego’s egalitarian instructions from the 1970s:

Lego's egalitarian instructions from the 1970s

I spent much more time sorting and organizing them than actually building with them.

So, you were a ‘sorter’… I always kept them in one big pile. As a kid I didn’t think about it, I just liked it better that way. Today, I still hold that it is not only more fun, but also more efficient - you don’t wast time with sorting the more common blocks, which you can find easily even in the pile. Every know and then, though, the big search commences for the one special piece you know you have somewhere in the pile… this can take half a day… but also gives the opportunity of coming across a different part that will enable you to do a different solution for your original build problem… a hack, if you will.

Also, I noticed that I actually dislike ‘sorters’ - no personal offence meant. When I grew out of Legos, the pile came to rest in my dad’s basement… a few years ago, the grandchild of my dad’s girlfriend started playing with them. Of course, that’s fine with me… but call me silly, I felt actual disgust when I found that my dad’s girlfriend had … sorted the whole pile… neatly, by type and color… I know it is silly, I haven’t touched the stuff in over 20 years, but it felt like a desecration.

The Lego instructions show sorting by color as the first step every time. I’m just saying.

I had this, except Lego branded 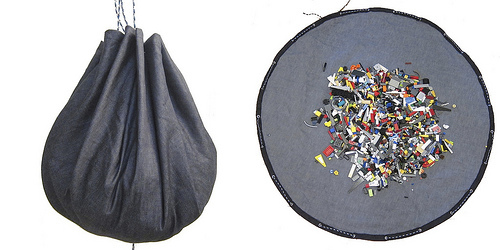 from the day Legos arrived at my house (maybe 4yo.) So I never questioned it, piling was the Way It Was. it hung at the ready on the closet doorknob–very convenient. but as an art type, I’m pretty sure piling would’ve ended up as my preference.

However, tools, kitchen stuff, anything with a Job To Do (rather than creative fun) has a specific place and I will just. fucking. lose it if I have to hunt for it.

One of my earliest distinct memories, possibly my earliest, was sitting at a table with my little sister and my mother, in front of a pile of Legos.

I saw that most of them were red or white, so I picked up one of the most common block shapes, with eight pegs on top, and attached another to it, so that the sides were smooth and they alternated colors, red and white. I thought it was obvious that was how Legos were meant to be used, because of the smooth sides. I was having a harder time finding blocks to continue this pattern, and I was beginning to wonder how I could finish this pattern, when my mother directed me to look at what my sister was doing.

I looked, and saw that she had bricks of all shapes and colors, stuck together in some chaotic assemblage. For a moment, I was irritated, as she was clearly not playing with Legos correctly. But why would my mother seem to prefer what my sister was doing? And, wait, I can’t keep just sticking more Legos on at the end and what if there’s some other way to play with Legos that my sister understands that I don’t?

It was my first experience of having my mind blown.

That’s funny, I never read them that way. Every time I got a new set, I followed the instructions building the intended model, and sometimes (though rarely) the alternate model, but I skipped the sorting and treated the new set as a pile of its own. It never even occured to me to sort them. After a few days, it was smashed up and went in the big pile, usually being integrated into some kind of space ship. Sometimes they grew so big that their structural integrity became a real issue… and it was always a drama when it accidentally broke up, because there was no chance of recreating it like it was. I wish there was at least one photograph of these, but there isn’t.

Just teach the kid about entropy. 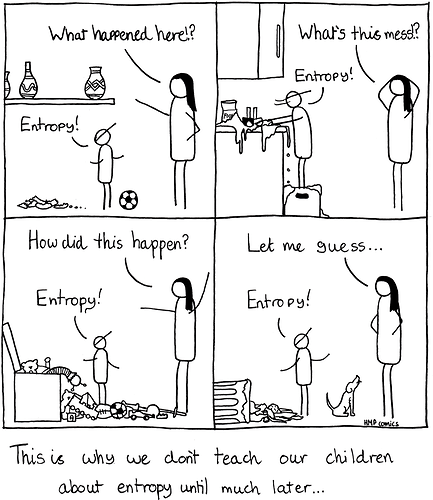 Back in the 80’s, I still had an idea that I could own at least one of every kind of brick lego made. It may have been a silly idea, but I could at least wrap my mind around it. Now they’ve mutated their parts into so many permutations it’s not really possible to find a specific shape of brick in a miscellaneous pile. So I’ll compromise, put the simple square blocks in one heap, the technic blocks in another, and the weird specialty bricks in a third and fifth and tenth pile. I suppose I’m giving up some of the random inspiration that building with the first brick to come into your hand, but when I want a shape, I want that specific shape.

Color is just another distraction. I’ve segregated out my red, blue, and yellow bricks, I mostly play with the monochrome and beige colors, it’s much easier on the eyes. The specialty weird colors are all mixed up in theior own rainbow mess, I usually dont want to mess with those.

I never played with an actual lego “set” but we had about half a cubic meter of just random (mostly 2x2 4x2 and 6x2) lego brick in a couple of large chests. My brother and I loved playing with them. We had a few 1 square foot foundations, and we always ended up just building towers to see how big we could make them before they toppled. Eventually we made one about 8 feet tall, and taped it’s spire to the ceiling before it could fall over. Quite an accomplishment when you consider that we had no feel for structural integrity.

Our towers always looked like clown puke, as far as their color went. Both pilers, sorting just wastes time we could be spending building stuff. That’s how we saw it.

However, tools, kitchen stuff, anything with a Job To Do (rather than creative fun) has a specific place and I will just. fucking. lose it if I have to hunt for it.

I’m sort of a hybrid sorter. My Lego set from my kidhood wasn’t particularly specialized (circa 1977 or so), but it did have subdivisions within the box for different pieces, and I generally sorted them thereby, though almost never by color. If I needed a 4x2, I never really cared what the color was (I didn’t really have enough individual bricks to be able to afford to care about color, honestly), but dammit, I needed a 4x2 and I needed to be able to put my fingers on it now without rummaging.

A loose sack full of bricks sounds about as useful to me as a bucket of assorted nuts & bolts. Nice to have in a pinch, when you need one random nut for something and you have time to dig through them, but not my idea of fun.

I don’t remember ever slapping bricks together at random. I was more goal-oriented.

Ugh. People who don’t care what colour their Lego is?

Incidentally, has anyone read The Peripheral yet? Gibson uses the word Legos - I think he must have been trolling.

I did care, but color was secondary; also, in those days with fewer special pieces, there was to some degree an inherent color coding. I started of which a big pile of “classic” bricks (2x4s, roofs, some ground plates etc). which I “inherited” from my cousin, then followed by some of the early space sets my late granddad gave me, later there was also quite a lot of fire engines… All roof bricks, which usually formed the noses and fronts of my spaceships, were red; the early space special parts like wings, thrusters and nacelles were mostly grey, rarely black and white, etc. And if I felt like building something really big, I always liked to throw in some 2x4 Duplos. I still admire today how these two systems could be linked.

:^P Fingernails on a blackboard are those who insist on wincing at those of us who played with Legos (with an S) in the 1970s. Next thing you’ll tell me is that you’re a soft-G GIF fetishist.

And yeah, I would have preferred to have more color choices when I built my Lego creations, but circumstances forced my hand. So my Peterbilt semi-truck was a tad psychedelic. At least it got built.

But of course. I speak proper-like.

Not my fault I can’t remember the 70s…

Sez you, what with your tyres and colours and boots and bonnets and lifts and lorries and kerbs and whatnot. You probably called these guys “toy soldiers”: 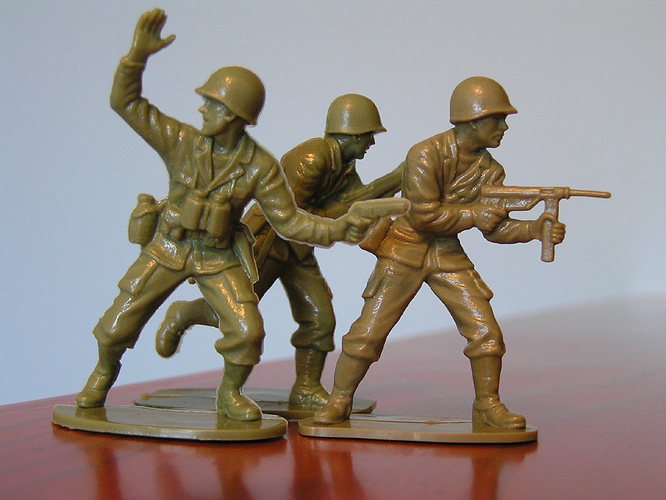 …when every red-blooded American boy knew them as “Plastic Army Men.”

Y’know, it’s only now that I realize how weird it is that we called them “army men” instead of “soldiers.” It’s not like there were molded plastic airmen, Marines, or sailors to be distinguished from those dudes.

Actually, I did call them army men. But I preferred these guys. 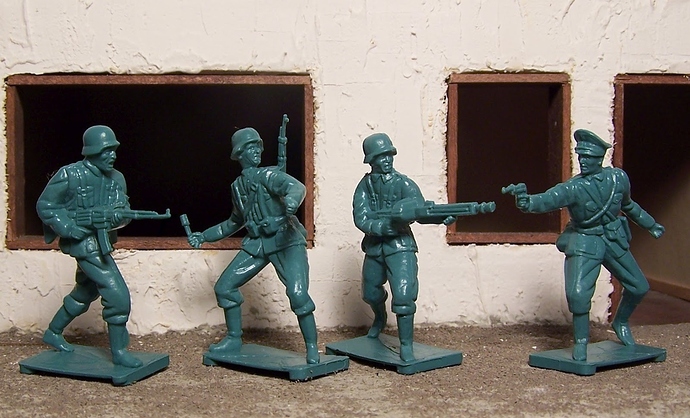 … and Lego wins again: what good is playing war with figures were you can’t take the head off?

Aren’t those the Nazis?

Well, yeah. But they look smarter and are a much nicer colour.

OMG. I don’t even know. I just made stuff. It always worked out.