The next-gen version of the game (i.e. several generations old at this point) got raked over the coals on PC Gamer.
http://www.pcgamer.com/saturday-crapshoot-life-and-death/

This video is great, and I cannot tell you how strange it is to see someone playing this game competently. As a child I killed maaaaany patients and never really learned anything about how to do these procedures properly, but I still played the game nonetheless despite the fact that it scared the everloving hell out of me with its seriousness.

The sound effects are really brutal too, lots of screams and scary sounds when you screw up and murder someone. Whooooops. 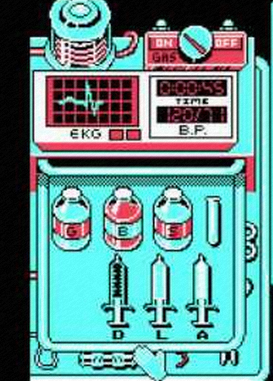 I want this to be a guitar effects pedal.

I had this very game. Playing it as a young kid i had no clue wtf i was supposed to do usually. Then i decided to kill all the patients, i killed like 100 before i got bored.

Mobygames Screenshots, CGA might not have been the best choice.

this awkward, deathly-serious medical game gave me the idea that I should volunteer to practice appendectomies on the other third-graders.

Funnily enough, it gave me the exact opposite idea. It convinced me that I would not, indeed, be a very good surgeon.

I never managed to perform even the appendectomy successfully. It was very disappointing.

Yeah, I always managed to nick in the wrong place. Maybe I used the wrong tool.

The feelies in the box–latex gloves and mask-- were memorable, but It would have been nice to get through at least one surgery.