Look at this awesome peanut butter tumbler that Kongorilla made

Originally published at: Look at this awesome peanut butter tumbler that Kongorilla made | Boing Boing

Thought I’d post this since there’s been peanut butter mixing discussions in the past, prompted by @markfrauenfelder recommendations. A few months ago, I quickly designed and printed a peanut butter tumbler. Since I wasn’t sure it would work, I didn’t spend much time making it “correctly” (no bearings or anything like that), just a proof-of-concept hack job using materials I had on hand – such as nails, rubber bands, and a surplus timer motor that’s been in my parts bin since the early '90s. …

Could use a paint can mixer for quick results

Man, that Kirkland peanut butter is the worst when it comes to separation. I’ve taken to just keeping it in the fridge as soon as I bring it home. This just substitutes one problem for another one, though.

My fave is Laura Scudders Chunky Peanut Butter. It also separates but i generally give it a shake for a minute or two and it minimizes the amount of mixing with a knife that i have to do, and i also don’t mind mixing it so ultimately it doesn’t bother me. I think i would hate keeping it in the fridge more

Neat. It looks like a really slow rock tumbler.

I guess I eat garbage PB, as mine doesn’t need mixing.

Basically, a rock tumbler setup, sans the rock tumbler. Mind you, while I own a “rock tumbler” myself, I’ve only ever used it as a ball mill, candy panning spinner, and rotisserie driver, but I think I can cheerfully add penut butter mixer the next time I have separated peanut butter.

Man, that Kirkland peanut butter is the worst when it comes to separation. I’ve taken to just keeping it in the fridge as soon as I bring it home. This just substitutes one problem for another one, though.

If you’re already at the Costco…
I buy the big can of salted peanuts and use my food processor to make a batch of peanut butter that goes straight into the fridge. Never separates.
When holiday times come around, I buy two tins so I have plenty to make brittle for family and friends and make PB again out of whatever I have left.

FWIW, this is the recipe that I follow for brittle. I double it and that fits on a sheet pan. 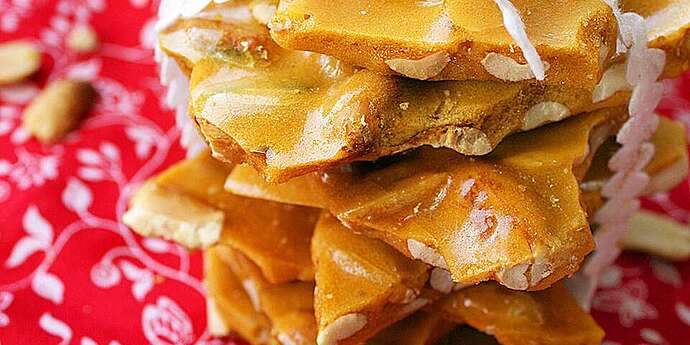 This is a wonderful peanut brittle that is easy to make and wows everyone! Have all the ingredients for this recipe measured out and ready. This recipe requires that you react quickly. You do not have time to measure ingredients in between steps.

I think someone’s on a peanut butter stirring kick. 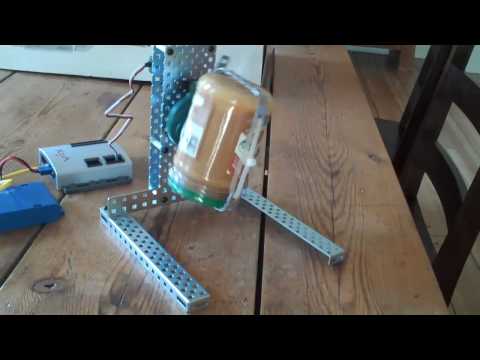 You know how a jar of natural peanut butter separates into two layers: a rock-hard layer of solid peanut particles on the bottom, and a liquid layer of oil that splashes onto the kitchen counter an…

Kirkland PB does indeed separate quite a bit, but since the ingredient list is just peanuts and salt, it’s probably not worse than other natural brands with the same ingredients. I’ve eaten it so long, it’s what peanut butter is supposed to taste like to me.

Previous to making this tumbler, I used an electric hand mixer with only one beater attached. Quick and effective, but my ability to grip a greasy jar, with that amount of torque being applied, is diminishing as the years pile on.

Since I modeled this while watching a baseball game, no time lost. Parts were on hand. The printer did the heavy lifting. A win for me.

It just occurred to me that I modeled this in Blender. Damn. That should’ve been the kicker to the whole story!

I just store nut butters upside-down for a no-tech solution to the problem. I kind of thought that’s what everybody did…

Totally this. Laziest solution = best solution. Just flip the jar every two or three days (like, say, every time your kid asks for PB&J…) and its all good.

…But supposing you dont flip the jar regularly, a great mixing apparatus of some kind is way more fun than hand mixing it with a knife.

This solution has not worked for me - instead it’s resulted in an unopened jar leaking peanut oil in my pantry. I guess it depends on the packing you’re dealt by your favorite PB manufacturer.

Fridge or no fridge for PB?

no. seriously. what is the purpose of this?

PB with stabilizers (hydrogenated or palm oil, etc) = depends on how fast you go through a jar.

Both types with eventually go rancid out of the fridge, but I’ve never experienced it. It takes longer than the few months it takes me to get through a jar.