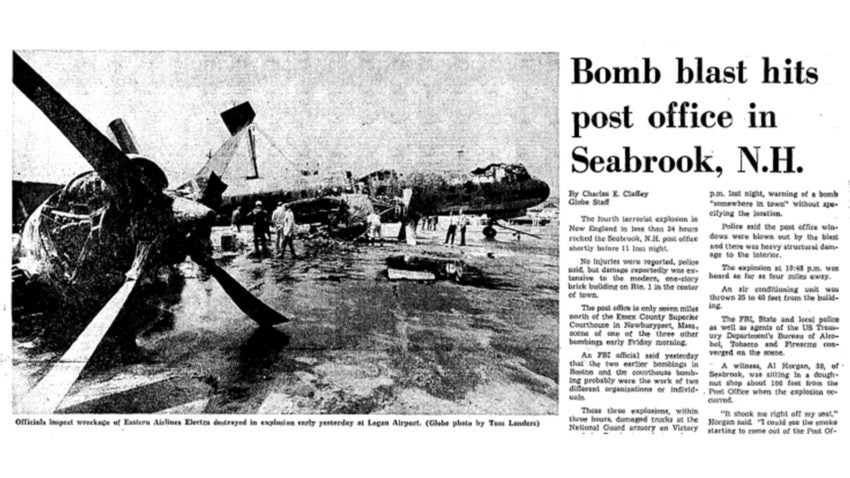 41 years ago, 4 bombings swept up the seacoast from Boston to New Hampshire

Terrorism in Boston used to be a somewhat regular occurrence.

Simpler times… and I had not ever heard of this before.

Perhaps “41 years ago” could be part of the headline?

It is! But I am also sure you mean the post title, and no, with a reason.

41 years ago this was headline worthy, not shut down the nation worthy.

I don’t want to take my shoes off anymore.

You scared the shit out of me.

Christ, I was about to call friends and see if they’re okay.

Christ, I was about to call friends and see if they’re okay.

what’s stopping you? It’s a holiday weekend. Good time for it I’d imagine.

as for the shock value, and to @Mindysan33, no shock intended. it’s a link. I thought it was in the link category, where I will move it now.

I intend to learn more about these historical happenings, as they seem like some pretty serious acts of terrorism,

It’s not the category it was in, it was that you mention a bombing at an American airport, with no context in the title. I think we all assumed that there was a bombing at Logan today, not 41 years ago.

So your saying you don’t appreciate a potential heart attack now and then?

I think we all assumed that there was a bombing at Logan today, not 41 years ago.

I can tell, though I didn’t predict that response. As I ponder how to be responsible about it all, I realized that as I stand with my shoes in my hand, with no liquids over 4oz, with my bits inspected, and having had to throw away a memento 1" penknfe my mother had given me for my keyring… and after being in line for an hour for the privilege.

This story and these responses put something into perspective.

I’ve realized I’m already pulled over. I can’t pull over any farther.

Sorry for the fright, I didn’t set it up to scare you. Really didn’t. Just an interesting link to me, and a much much more interesting response than I expected!

Sorry for the fright, I didn’t set it up to scare you

Sure, I didn’t figure!

But it was a scary thing to see. I’m glad it was a historical story and not a current one!

I didn’t mean to trigger any such reflexes, if that’s a fair way to describe that. What’s changed so much in the intervening years that we’re now so… terrified. Mad bombers in the same city a generation later shut the city down entirely for days. Entirely. Wheras my dad worked at that airport, FOR THAT AIRLINE, at that time, and I was alive, and I never heard about it. What’s up with that. 41 years ago it was forgettable. Now we assume the worst, and, it seems, a part of our minds fully prepared to spring into action accepting the worst and jumping to making sure our people are okay.

Have terrorists made us more credulous? I mean no insult, you see what I’m getting at I think?

It’s telling that we all assumed it was yet another atrocious current event, because that shit has become uncomfortably common.

At the same time, leaving the date off from the post title intentionally seems a bit bait-like, just sayin’.

You do know that damn near everybody in the US is already nervous as fuck right now, right?

You do know that damn near everybody in the US is already nervous as fuck right now, right?

I wonder if, 41 years ago it was fear of war with the Russians that kept other things in perspective?

I don’t want to take my shoes off anymore.

I’ll be very curious to see how the TSA changes, or doesn’t, under The New Regime.

It seemed as if things were starting to ease. The last time I flew through MCO and OGG, both had signs up saying “don’t take off your shoes or your belt! Don’t take your laptops out!” and the TSA agents told us it was a quickly spreading pilot program to get rid of those edicts. And when I went through CMH at Christmas, they had a liquid scanner to put any bottles through, so you can take drinks or toiletries that’re more than 4oz. in your carryon.

More on airports and the modern security apparatus:

The Skies Belong to Us

The Skies Belong to Us: Love and Terror in the Golden Age of Hijacking is a 2013 narrative nonfiction book by the American author Brendan I. Koerner. It is a history of the "golden age" of aircraft hijacking in the United States from the first incident in May 1961 through January 1973. Hijackings during this period took place as often as once a week, with about 160 incidents in total (most were to Cuba). The book looks at the causes of the epidemic, some of the more famous ones and follows in-dep...

It didn’t start with 9/11, even if that event created even more security theater.

leaving the date off from the post title intentionally

I know you know that unmet expectations rarely map at any productive scale, to intentions. But now with hope you also know, that I can take a hint.