Please God, don’t let him turn into another Brian Herbert - or Christopher Tolkein, for that matter. A little rescue project is one thing, but if he tries to make the Return, I will start throwing things.

That was one baaaad animated movies. I saw it when I was in grade 4 and hated it for what it did to my then favourite books. I feel no need to see any outtakes.

At least he didn’t have fucking Elves at Helm’s Deep.

I’m pretty ambivalent about the LoTR stuff but American Pop is one of my favorite animated films and I tend to really dislike rotoscoping.

Yeah I’ve never understood why so many articles on the subject discuss Bakshi’s LOTR so breathlessly. As if its a tragically lost classic. I own a copy, I’ve seen it many times. Its terrible. Even technically its a mess. Parts of it certainly look great, but it frequently looks like smeared crap (those orcs?). Its bad enough, and inconsistent enough to be actively funny (which is why I own a copy), and as a Tolkien nut it certainly isn’t anything special in terms of respect for source material.

Some of you who aren’t fans will appreciate this overdub version. Actually pretty funny. https://www.youtube.com/watch?v=M1x3XkHs-BE

This colored my childhood more than it probably should have:

I suppose it all comes down to taste.

I wonder if there are folk out there that dislike ease-in/ease-out.

Fair enough on all points. I do think it’s a deeply flawed film. But the adaptation (by Peter S. Beagle, if memory serves) really isn’t all that bad. But there are parts which work pretty well, considering.

What I find odd about it in my adulthood is how mundane much of it seems, especially when compared with Bakshi’s Wizards (not an expression of quality, just an observation). Perhaps that was deliberate, to help Middle Earth seem more grounded in reality.

I think that it’s probably overrated because, for quite some time, it was the only LotR that we had on film; plus, Bakshi influenced John Kricfalusi (who worked with/for him early in his career) and Kricfalusi in turn influenced a lot of people via Ren and Stimpy; even if the latter doesn’t much resemble anything in particular that Bakshi has done, it’s probably led to his work being reconsidered. For my part, I tend to agree with Ebert’s review; in particular, I was a teenager when I saw it, and was mostly bored with his version of Helm’s Deep.

Don’t get Ralph Bakshi confused with Hanna Barbera! The former was sadly not done well, partly from the inadequate budget they were working with; the latter was a crime against humanity.

There are a lot of wonderfully done elements of Bakshi, though. It’s still has my favorite version of Bree.

I definitely prefer Peter Woodthorpe’s Gollum (both Bakshi and BBC versions) to Serkis’.

Everyone knows the story of LOTR, but in “Wizards”, we were all shocked and saddened when we learned that they had killed Fritz.

Erm… I don’t know, I am very glad that The Silmarilion, Unfinshed Tales, etc. were published, both for the main texts and (in the latter works) for the annotations on Tolkein’s various versions and things. It’s nice to get inside the creative process. Also it’s very difficult to understand who Aragorn is with really getting the history of his ancestors all the way back to the dawn of the Elves and Men: LoTR is a much deep experience for the published histories.

@subversivemum: yeah. . . someone needs to do a reworking of that song, there’s no doubt about it. Also, ditto on the childhood influences of that scene in particular.

After remembering this scene and this song again I totally just made it into my ringtone for when my boss or my mother calls. So there is that. 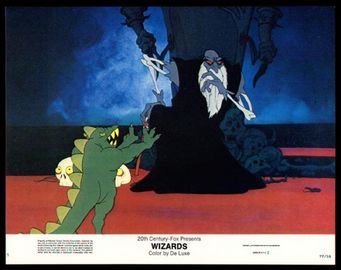 @subversivemum: yeah. . . someone needs to do a reworking of that song, there’s no doubt about it. Also, ditto on the childhood influences of that scene in particular.