My God! The Jupiter 2 computer was the Batcomputer? No wonder they got lost, the thing is optimized for crime-fighting, not interstellar navigation! 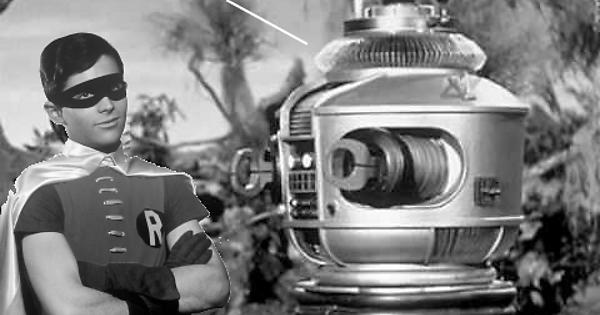 It would have been cheaper/easier to recreate the computer screens from the first season of ST:TOS. Just print them out and laminate 'em.

It’s a Burroughs! The business machines that paid for William S.’ Harvard education!

I believe Irving Allen himself persuaded 20th Century Fox to buy the old computers to use as props. You’ll see them in many if his sci-fi TV shows.

I think they were part of SAGE: The Semi-Automatic Ground Environment (SAGE, a name selected to mean "wise") was a system of large computers and associated networking equipment that coordinated data from many radar sites and processed it to produce a single unified image of the airspace over a wide area. SAGE directed and controlled the NORAD response to a Soviet air attack, operating in this role from the late 1950s into the 1980s. Its enormous computers and huge displays remain a part of cold war lore, and a common prop in mo...

Sometimes I wish I had enough room in my house for stuff like this. Although I’d probably end up tearing it out every few years to build something new. There’s no way to have infinite space for such things.

Well, at least not until we get holodecks.

Even in the day when this show was on TV I never understood how you can get lost in space. You just have to look up. The entire galaxy is right there to look at.

What a bleak childhood. Have some Jell-o.

Another version of a Burroughs word processor…

I never understood how you can get lost in space.

It’s all explained in the first episode.
Which is quite well done.

So whats the explanation? Did Dr Smith destroy their telescope?

But let me state again — all is explained in the first episode. Which is a very good bit of science fiction. Directed by Anton Leader!

I’m really impressed that he didn’t just recreate the appearance of the prop, he recreated all the analog prop controls and incandescent lights. He really recreated the prop.

Is that EMERAC (the computer from the movie, Desk Set)?

a device like this makes it easy to reach the right mood for writing e.g. romantic comedies

Which is a very good bit of science fiction.

The first six episodes or so are all very well done. Then they changed to $plotComplication of the week and it went downhill from there. (Keeping Jonathan Harris past his initial schedule appearance didn’t help any …)