A bit crap, this, but still fun. Slapdash is my chosen artistic style.

Went to the David Lynch “Between Two Worlds” exhibition* and picked up a few postcards as well as a signed CD**.
One cheap-arse Ikea wooden frame, some fimo and a few odds scavenged from the parts-box, slap some carelessly applied acrylic paints on it and I made this… 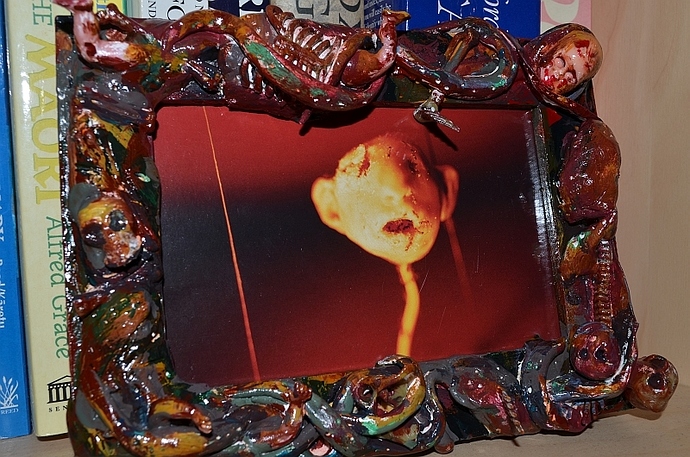 It’s going in the kitchen.

*Which is brilliant. Go see it if you’re a fan and it’s on nearby.
**For the same price as a normal one. Yay!

god that’s terrifying, but then again so is the wildlife where you live.

All those video nasties I watched as a yoof had no effect on me whatsoever.

Besides, I don’t see why the craft section should be limited to awesome stuff by talented folks.

Total spend on the above, including the postcard - less than five bucks. Dollar for the card, 75c for the frame, buck for the clay and about the same for the paints, 50c worth of Halloween/Xmas toys.

All those video nasties I watched as a yoof had no effect on me whatsoever.

Just how many of the Faces of Death movies have you watched?

It does look pretty spiffy, if macabre is your aesthetic. Most of all, I do appreciate you sharing your crafting.

god that’s terrifying, but then again so is the wildlife where you live.

Do I need to remind you of where he really comes from?

Yet across the gulf of space, minds that are to our minds as ours are to those of the beasts that perish, intellects vast and cool and unsympathetic, regarded this earth with envious eyes, and slowly and surely drew their plans against us.

macabre is your aesthetic

Macabre’s good in our house. Mrs. M. gravitates towards skulls with the same enthusiasm as a six year old Barbieholic goes for pink.

S’only fair. I love seeing other folks stuff. Gives me a lot of ideas I can borrow and adapt to make something not nearly half as good as their original inspiration.

This topic was automatically closed after 700 days. New replies are no longer allowed.