very enjoyable, a fun ride over the edge. Sad to see the Last of the V-8 Interceptors reincarnated, then smashed, then rebuild, and smashed again… but fun

Saw the original in a movie theater, saw the second in a theater… thought about seeing this on netflix later, but? had to see the big screen!

interesting that Hugh Keays-Byrne got to re-appear… 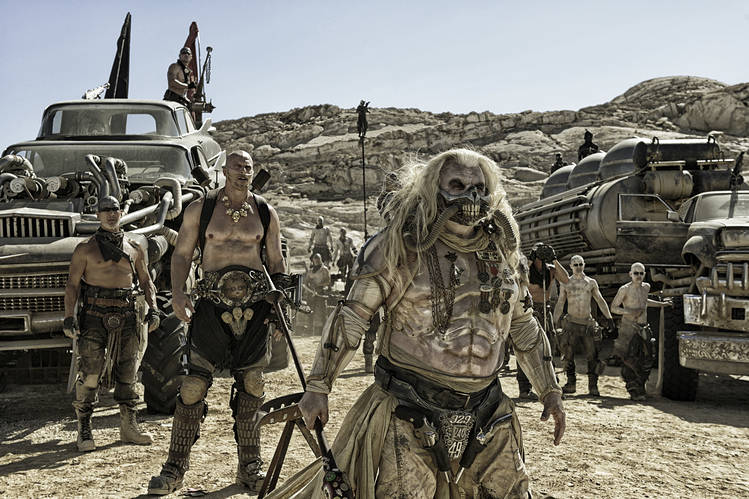 Hugh Keays-Byrne, who played the Toecutter in the original 'Mad Max,' returns to the franchise as the tyrannical Immortan Joe.

Would have loved to see a tribute to the Gyrocopter captain

but all in all? what a fun way to spend 2 hours…

'twas a blast. I do wonder why the R rating - it’s violent, but not gory.

Really? I saw it last night and the meh is still overwhelming. No personality, no surprise. Nothing unexpected in the entire film. It was visually gorgeous and I agree that it’s utter lack of “backstory” was awesome. But it was one long, monotonous, utterly predictable chase. I wanted to care, but it was very hard. I honestly don’t understand. Why so flat. Why so little story?

Cars were flat out awesome though. Also full kudos for the explosion in the distance and no explanation of how Max blew up the car. Makes it sooooo much better than explaining it.

I wouldn’t say there is no romance. There is one romance sub-plot. No sex and no rape for sure was nice. (I wouldn’t call it romantic, not sure romantic ever happens in that world.)

It felt like the blood thing was more than just “ritual” since they went to the trouble of tattooing the fact he was a universal donor on him. It seemed like Nux needed occasional transfusions to survive. They sure as hell didn’t go out of their way to explain anything (which is great, they live there they know what’s happening.)

And Joe kept his position mainly through control of access to water. Using that to create a religion around his immortality.

I thought the many layers of detail impregnated into the world and its characters strongly supported the near-literal roller-coaster ride which totally absorbed me from start to finish. I want a sequel! I want many!

Saw this yesterday. It is a thing of beauty.

I have not seen a 3D movie yet. Should this be the one?

There were some bits that would have been pretty cool in 3D though it is still amazing in 2D. If it the extra $$ of 3D isn’t an issue for you sure, go for it.

Pretty sure the Warboys were broken in some way. Anemic or some other blood issue, where transfusions would give them a boost.

But it was a brilliant film. Great in every way. Beautifully shot. They should get an Oscar for cinematography. The effects were amazing. OMG thank you for bringing back real explosions and real crashes. Everything felt so much more real. The action was high paced and created a lot of tension. The prop and character designs were amazing.

My only criticism is people ruining it by claiming it is championing this or that. OMG just enjoy the film. It is a very simplistic plot they managed to no fuck up with any of the tired bullshit. Bravo.

One particular BB (ir)regular has been waiting in great anticipation for this movie to come out. Waiting patiently for @Donald_Petersen’s review…

You can see his comments over here.

Personally, I really really disliked this movie. There were so many offputting moments for me, and things that took me out of the fictional world.

For example, in this world, they have a lack of gasoline, but they use flamethrowers as weapons – not exclusively, but significantly. They have so little energy that they have to make slaves walk on a wheel to raise a scaffold up, but they have a double-necked guitarist leading them into battle with a flamethrower mounted between the two necks of the guitar? (I also found the fact that the guitarist didn’t seem to know how to play guitar jarring). Similarly, they ration water to the point that when water is ritualistically released, the underclass runs under it with buckets to collect it, while the unexplained dictator warns them against getting “addicted to water”. However, the water isn’t rationed enough that people die from dehydration.

I found the lack of any explanation for any parts of the culture offputting. There’s a dude with a golden nose, but it’s never mentioned. When one of the white-skinned dudes (why are they sick? It’s never mentioned, but it seems to be genetic) expects he will die soon, he sprays spraypaint over his mouth, yells “witness me”, and shouts something about Valhalla. Why does any of this happen?

To each his own, but I found nothing interesting about this movie. It was mainly a bunch of disconnected fight scenes with hints of interesting story glossed over with a cry of “the plot’s this way!”

And part of what I liked about the movie was that it didn’t over-explained. It may not have been your cup of tea, but I like that sense of being in a world. The people there don’t have to explain everything to each other because they live it. In that sense, it’s very William Gibson-like.

But think of the dictator as a leader of a religious cult. The Warboys (who were probably all dying of radiation poisoning or some such being it was the apocalypse) was his priesthood. The masses just wanted water-- which he controlled. And the guitar guy, was just awesome (but if you need an explanation, they didn’t have radios. They needed some way to communicate over the roar of engines.) Feel free to fill in the rest.

Ha. Took the weekend off, and missed that thread entirely!

And part of what I liked about the movie was that it didn’t over-explained. It may not have been your cup of tea, but I like that sense of being in a world.

This movie is definitely for someone, but not for me. I liked some of the ideas of the world, but I find it frustrating when I’m teased with details but none of them are explained.

And yes, you can come up with semi-understandable reasons for each of these things, but they’re all a bit of a stretch, and I go to a movie to see the world explained – at least parts of it – not to come away with homework to justify the entirety of the world. This is especially true when it doesn’t make sense – if the guitar guy is for communication, why don’t they have radios? Why is there only one guitar guy? Why does no one respond to a single chord with “he’s playing ‘Louie Louie’. Turn left!”?

The movie has some good action sequences, definitely. For me, that’s not enough to make up for the non-explanation of any of the cultural elements. If you’re ok with that, it’s probably a good movie for you. And that’s fine.

I thought the mention guzzoline town and bullet town were enough. You know a town over an old well making the gas, one making ammo/weapons. Bizzaro cult running the water town. Also I don’t think that was krylon but just frost from the cold aerosol. I gathered it was canned nitrous to give them a big high while going to Valhalla.

It sounds like 3D was added in post-production rather than actually filmed in 3D. Personally, I’d rather have my first 3D movie be one that was intended to be 3D.

You can use this to check the status of a movie’s 3D realness: http://www.realorfake3d.com/

Sounds like you are looking for exactly what I dislike about movies. I love detail, and I prefer the details to make some sort of sense - but I loathe being spoon-fed explanations. It’s bad visual storytelling. It’s hard for me to fathom why somebody on screen wasting a few seconds to rationalize something makes a detail “ok” when the viewer could just have easily decided it (or something else) for themselves. The hallmark of a successful movie is that it left me with more questions than I initially had.