Make a sourdough starter to bake bread during the pandemic

The grocery store still carries instant dry yeast, even during a pandemic. Those of you with bread machines, instant pots, etc can still make a loaf.
Since you’re probably watching YouTube 12 hours a day right now, go check out the No Knead Bread videos. You can make a little crusty Ciabatta-like loaf on your first attempt in about 18 hours.

I mention this, because I find sour dough to be kind of hit and miss with the results. Some starters turn out better than others. After a few crappy loaves it gets better though, if that’s any consolation.

I’m never tired of your bread posts. Keep them coming!

Instead of discarding the excess, consider making a fry bread. A minute or two in a cast iron pan and a little butter or olive oil and you have yourself a delicious snack.

I usually go for soft pretzels or waffle batter.

My wife tut-tutted when I kept the spent grains from my beer-brewing. I mix it in with the flour and it cuts the amount of flour I need in half. 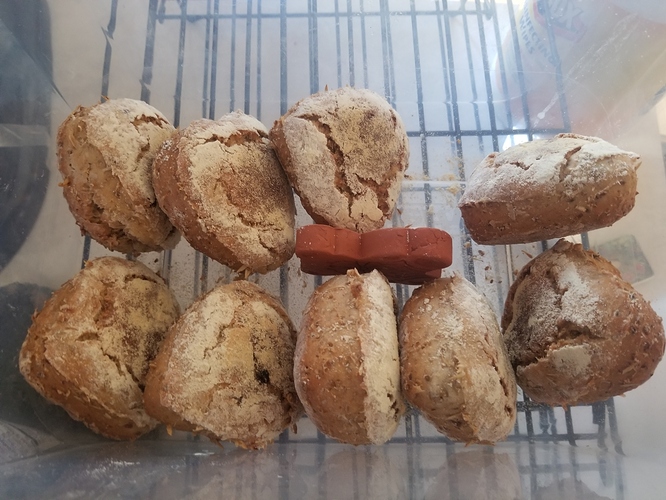 Yes. Since I do make bread, I skip the packets of yeast and buy it in jars. And I keep it in the freezer, though the refrigerator is fine. I used to buy small bags at a natural food store, but that dried up so I buy brand name yeast in jars. If buying in bulk, keep the jars, they are a handy size to refill.

But bread is more than yeast, I would think flour might be harder to get. I like buying it in 10Kg bags, but I’ve not been able to carry the weight lately.

But as you say, sourdough is a different type of bread, useful in some instances (like the Klondike gold rush), but a flavor people sometimes pay good money for.

If you make soymilk (or turn it into tofu) there is pulp left over, and that is a good additive to bread. It’s not high protein since it’s leftovers from processing the soybeans, but better to add it to something than toss it out.

But after a few years of making tofu, I decided it was simpler to bjy it. I needed to make too.much soymilk to make a reasonable amount of tofu, and soymilk is messy, lots to clean up.

I keep a jar of Fleischman’s Active Dry in the fridge too. There are breads that don’t want sourdough yeast and sometimes there are demands for bread faster than 18-24 hrs of rising in my environment.

During the isolation phase of this all I think I have time for a new starter.

I always begin my starter using whole wheat flour because (supposedly) it has more natural yeasts already on it than bleached white flour would have and seems to activate faster and stronger. I feed it unbleached flour thereafter as it grows. 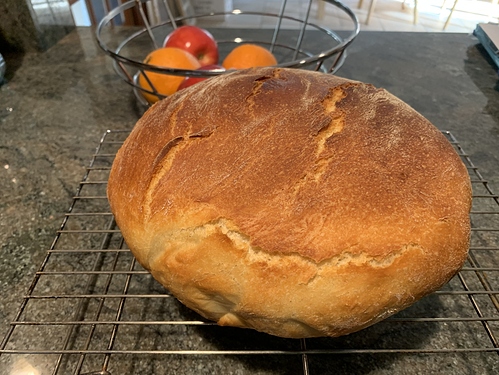 I’ve never had much luck baking bread, but this turned out pretty well with a minimum of fuss. The recipe promises sourdough, but produces more of a white bread. 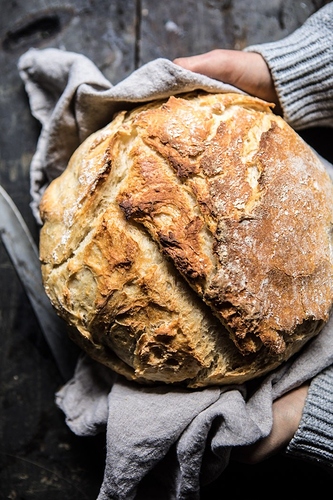 As a home brewer, and occasional bread maker, I looked into sourdough starter. They both appear to be the same --brettanomyces–, although I’m sure there are variations and certain beneficial bacteria that may be present or absent. The wild yeast in my neighborhood makes a surprisingly good Belgian/lambic. I believe (but have yet to try) cultivating the yeast from a sour beer, but it should make a good sourdough bread yeast. Alternatively, I may just open the window and let the magic happen.

Nice! May I recommend scoring the loaf next time? (Make a shallow cut, less than 1cm deep. You can try different patterns, but for a round loaf like that, a big cross would be nice.)

It encourages the loaf to expand in the oven and makes it look very fancy too!

I’ll definitely try that, thanks!

Heh. Will the BoingBoing store be far behind?

It’s not hard to get something to grow in your new starter, but in my experience it is not entirely foolproof. The idea is that once the yeast starts to flourish, it will kill the other things that are in there, and a lot of sources will say to keep going even if it smells wrong; but I kept ending up with persistently vomit-smelling clostridium goo. It actually seemed to be worse when I lowered the initial pH (e.g. with a bit of apple).

So I would say, just use flour and water, and start over if it doesn’t work after a week.

Pretty much any kind of flour will work to create a sourdough starter, but I’m told the best results come from using half-and-half white flour and rye flour. I’ve been baking my own bread for forty years now. My wife has a sensitivity to commercial yeast, and I have a senisitivity to white flour (I mean things get unpleasant if I eat much white bread). So these days I make half-wholemeal loaves for me and any guests, and white bread for her. Her white bread had a little oatmeal added - it makes the bread a little lighter. The half-wholemeal has 4 ounces of oatmeal and 4 ounces of rye flour - these two balance out, but give the bread a nice texture. In winter I use coconut milk for the liquid - it makes a much richer bread. Enjoy!

I keep a small starter in jam jars in the fridge, and use 1 Tbl or so to make a large starter the night before I bake, and re-feed the tiny starter before it goes back in. The “discard half” method feels highly wasteful. Only takes a little bit + time to make what you need.

I’m finally using up the flour from the freezer! The recipe says “focaccia” but has it rising 12-24 hours. Also all I have is whole wheat so we’ll see.

I was surprised at JLW’s saran wrap technique. I’d think a more aerobic environment would foster growth and be far less smelly. Those anaerobes give a lot of funk. So perhaps a dry cloth draped or elastic-banded over the top to keep the visible critters out, or leave it totally open to invite the neighbourhood in.

Update: Yeast was almost gone from Vancouver-area stores. I had just used the last of my expired-in-2015 Fleishmans for Pi day Saturday. I got a new jar and was press ganged into consulting with jittery newbie yeast bakers. One woman wanted to make pizza that night. It was already 6:30 pm, but I didn’t want to discourage her. Pizza at 9pm sounds great to me.