How to make sourdough starter at home

A truly hard-core process, IMHO. Which I obviously have not tried.

Without sourdough, I just make “regular” waffles, which may be from scratch or (gasp!) Bisquick, depending upon how distracted the kids are (their demands to help usually dictate Bisquick on my part, so I’m a bad Dad

); at least I go psuedo-buttermilk with lemon-juice in the milk.

However, I had a “felafel waffle” at a pop-up waffle-shop in Worcester, MA* a couple of years ago, and have been meaning to try that at home. I’m held back by everybody else in the house, no doubt, refusing to eat said products. Nobody would even try the gravy I made yesterday (sob!) nor the “Greek hummus” I did in the afternoon (chickpeas, feta cheese, spinach that had been freshish the week before and was well-picked over, lemon-juice, cinnamon).

Hunh. That’d go great on a felafel waffle, wouldn’t it.

I’m curious to see your waffle recipe. My mom’s, the one I grew up with, had a tablespoon or two of sugar in it. She was horrified to discover I don’t use sugar in waffles, and I can’t really imagine putting any in today. Shredded cocoanut, that’s another story…

* It operated only on Sundays in a bar. Hunh. Great waffles, but I hear they’ve moved.

JW does mention bread yeast is optional, but I’m wondering if you don’t use a yeast starter, then maybe you don’t want it covered immediately as the instructions state?

Wild-starter takes some time – expose it to the open air for… a week? Then grow and cull and grow and cull it ruthlessly for some weeks. Or so I have read. It was a glossy bread book I got for my dad, quite possibly written by a SF bakery.

It can only take a few days to make a wild yeast starter from scratch if you frequently bake bread and your kitchen has a lot of yeast hanging around waiting to colonize any available food source.

Some people drop in a bit of fruit - a grape is the most common - to seed the starter with some yeast and sugar, or at least I think that’s why they do it.

I think the recipe in article is way more complicated than it needs to be. You simply mix equal parts water and flour, and then just eyeball it till it has the consistency of vanilla pudding. Don’t make tons, half a cup of it is enough.

Cover it, wait two weeks, replace half with fresh water/flour mix. It’s going to bubble and likely get stinky and gross, and you’ll think you ruined it, but actually its a good sign, that’s the cheese bacteria (lactobacillus) taking over your culture. It’s the first step.
Then the yeast will multiply and then overtake the lactobacillus. You’ll know because the sour smell will go away and the culture increase in bulk from gas bubbles, and it will smell yeasty.
You can keep it fed by replacing half its volume with fresh flour/water, and it will become more efficient the more you keep feeding and replacing. Once the culture is at the point of doubling in less than 8 hours, your good to go.

With just a tablespoon of mature starter you can make whole lot more right away, as much as you need.

If you want to use other kinds of flour, like rye and whole wheat, just start with your white flour starter and introduce the new flour during a regular feeding. The goal is to let the yeast acclimate to the new flour.

I personally don’t care for real sourdough, it tastes weird to me. I just liked the idea of being able to bake bread with just flour and water, survivalist type of thing.

The biggest thing I’ve learned is not to have it watery, you want the mix stiff enough to be able to trap gas bubbles., but not too stiff.

I don’t think you have to fret too much over the yeast part. The yeast is practically everywhere. There might be different yeasts that produce different results, but that I think is a matter of trial and error after your done baking. I’ve managed to get a starter from scratch on the 12th floor in a highrise during the winter without any issue.

I found it works much better for me if I measure out the flour and water by weight rather than volume. I still use equal parts of each though.

Sourdough Ciabatta (or my variation on it) has become part of my routine during this way too cold winter. I can’t make it fast enough.

By weight is better. Doing equal amounts by weight is called a 100% hydration starter; you can do higher or lower hydration levels depending on the desired application. I’m not sure what those other applications would be, but I know some professional bakers tinker with it.

Michael Pollan’s Cooked has an interesting bit about making sourdough starter and baking bread with it. He learns from Chad Robertson of Tartine Bakery in SF. Maybe it was a Tartine book you got for your dad? 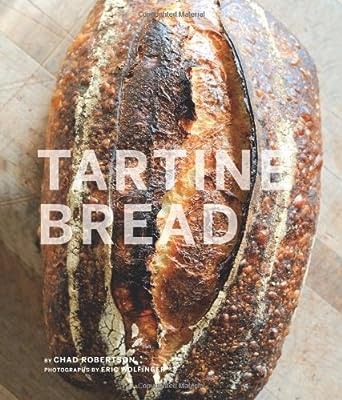 For the home or professional bread-maker, this is the book of the season. It comes from a man many consider to be the best bread baker in the United States: Chad Robertson, co-owner of Tartine Bakery ...

(Waaah! No affiliate Link for me!)

Also, it is the internal body temperature of a Tauntaun

I’ve managed to get a starter from scratch on the 12th floor in a highrise during the winter without any issue.

Supposedly there is enough yeast and lactobacilli in your bag of flour to start a starter with just some water. I think that was what I suggested, with bread yeast as an added optional to ensure people get a starter. Any starter you keep around for a few months should turn into one largely populated by your local flora, or so I have read time and time again.

I was on a huge no-knead bread kick for a while and just kept a bucket of dough in the fridge. When it got low, I added more flour and water and went on with my day. Eventually it became a proper sour-dough. Sadly I got really hungry one week and baked it all.

A truly hard-core process, IMHO. Which I obviously have not tried.

It’s not really that hard. It does take a bit of fiddling after a bit but I did it by literally dumping some flour in a clean container with a lid and adding water. I don’t have a colony running right now but have been meaning to get one going again.

I haven’t read the article (got distracted by your comment) but, if the article is much more complicated than that, it really doesn’t need to be. Will comment after actually reading if I feel the need.

I haven’t read the article (got distracted by your comment) but, if the article is much more complicated than that, it really doesn’t need to be. Will comment after actually reading if I feel the need.

Ok, so the article isn’t overcomplicated at all. Y’all can do this. I have faith in you. The amount of time (actually doing something anyway), energy, and resources required are quite low. Only caveat I’d put on the article is that you can do just fine with a plastic container that has a hinging lid. I think I found one at a chain store for like $12 USD.

The hinging lid is for convenience and for not having a blow out.

I’m curious to see your waffle recipe. My mom’s, the one I grew up with, had a tablespoon or two of sugar in it. She was horrified to discover I don’t use sugar in waffles, and I can’t really imagine putting any in today. Shredded cocoanut, that’s another story…

Depends on what the waffle is for! Shredded coconut sounds fantastic! Do you sauté it our add it raw? I bet sauteed in butter with some brown sugar, with the butter added to the batter as well… Good stuff! Now I am hungry.

I’ve read that certain places in the country have distinct yeasts, like on the West coast. San Fancisco and even Alaska are suppose to have natural yeasts that yeild decent bakery goods. I don’t know how true that is. I don’t know if whoever made that claim are using hundred year old cultures, which you can get for free from some places, just pay for the shipping.

When I attempted it myself the result was not awesome. It’s hard to believe anyone would have liked it, which suggests that my apartment yeast, or came with the flour is inferior. I did share some with a colleague at work and he told me his family didn’t care for the final product either.

It just tasted like something you weren’t suppose to eat. My bread did rise, and it looked like bread. It takes a whole lot longer to rise with starter. Perhaps I should have kept it going for a longer time and then it would have improved in quality.

It was interesting learning experience. I might experiment with placing it outside next time and see what happens.

I keep mine in the window here in the bay area, it was uncovered for four weeks and certainly got steadily more sour over the weeks that followed. I did bake with it after the first week and it was not sour, it was like slow and poorly rising dry yeast bread. Now the stuff is good but very finicky. I need to use it just like 3 hrs after feeding or give bread a long rise. It is very sour and throws off a ton of liquid at a 50/50 hydration. I could probably send you a sample.

Cinnamon roll waffles. That is all.