Man buys $27 of bitcoin, forgets about them, finds they're now worth $886k

I knew I should have done this back in 2009 but NOOOO. I had to keep my money in Quatloos. Stupid Providers.

I’m sick of these Kochs getting all the breaks!

With my luck I’ll invest 886k in dollars and it will be worth $27 in four years. That is what I did during the dot com boom. And the CDS mortgage crash. I really need to stop buying high and selling low. If only I had some sort of time machine…
But the tools in this era are so primitive. Fission power turned into steam? Burning dead plants. So wasteful. When the Zero Point Energy is taped or anti-matter is contained and channeled THEN I can travel back in time. But by then money will be worthless.

Just out of curiosity, how difficult would it be to cash in his bitcoin haul, and would he be able to get the full, or even close to the full amount?

This is a purely academic question since I’m an impoverished skeptic who, perhaps foolishly, still thinks investing in bitcoin makes about as much sense as investing in Beanie Babies.

Getting his money might be rather difficult at this point. The biggest trading house, MtGox, had its US assets seized a couple months ago and ever since people have been complaining about being unable to withdraw funds. There are some other trading sites like BitStamp, but I’m unsure how much volume they can move.

There are ATMs now though: 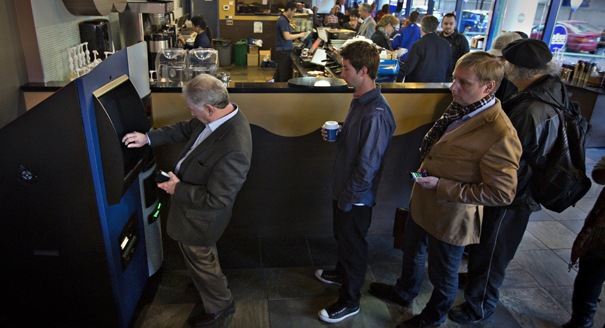 The machine is the first of five to be launched across Canada.

Apparently it was easy enough to convert a fifth of it into a nice condo in downtown Oslo.

Bitcoin and Beanie Babies were both fantastic investments. People who got in early made a fortune. You need to buy low and sell high. Most investors miss that basic little premise. The only people that lost money on Beanie Babies were greedy idiots who got in it after the boom had already happened and stupidity thought the things would continue to appreciate for infinity.

A pair of early and actual rare Beanie Babies jsut sold last month for $31,000. The money was and still is there for the people who were smart. It’s the idiots that were lining up at hallmark stores buying the things by the dozen that lost money.

I’ve been to Oslo. Living expenses are simply inconceivable (from my sheltered American experience). Either property values are inconceivably low compared to elsewhere (despite the otherwise stratospheric cost of living, and remembering that Oslo is tiny and tightly packed, so there aren’t vast expanses of downtown to be housed in) or no, he didn’t buy a nice condo in downtown Oslo for $180k. The down payment, maybe.

What I love about this post is that it’s equal parts accurate, biting satire, and blithering optimism about fad investments.

Not too hard, wire transfer from Bitstamp or CampBx or other exchange. Just did one last week.

Nope, other exchanges that followed the money laundering laws can still convert to USD and send a wire transfer. Just did so last week from both Bitstamp and CampBX

Satire or not, definitely makes me feel better about the small cache of 2nd gen (or 3rd?) beanie babies I have squirreled away from … fifteen years ago. If I make $5 a piece, I’ll have made better returns on those than anything else I’ve ever invested in.

I was wondering about that. Supposed to be the most expensive city in the world. It says “flat”, though, so it could be pretty small. And I’m not sure if Oslo is expensive real-estate wise or expensive as in, “no food grows anywhere close to here save herring”.

I can’t even look at my 401k reports. I think it’s still shrinking faster than I’m throwing money into it.

I certainly don’t look at mine. Though I blame my previous employer for offering fuck-all for options at my previous job. There were no options that weren’t losing money! I did max my matching to spite them a bit, though.

P.S. They did countless shitty things and so I got this idea in my head to spend all of my spare income on stock and convince all of my colleagues to do the same and just spread it around until workers could take over the board in one block. Well, shortly after I had the idea, they instituted a policy that limited how much of their stock you could own based on a percentage of how much they paid you. My timing on that idea was incredibly bad.

Anyway, that was my motivation for spending some of my own money to fuck them over just a teensy bit.

He bought an appartment in Tøyen, the article says.
Wikipedia:
“Tøyen is a residential area in the central parts of Oslo, Norway.”
“It is noted for its high concentration of immigrants. The multicultural atmosphere makes Tøyen very trendy and popular with continually rising cost of housing.”
“In 2012 Tøyen is known for its considerable social problems. One out of three children lives beneath poverty level. The school district counts less than 300 pupils, while the area has more than 1,000 council flats. 60% of the locals inhabit flats with only one or two rooms.”

“When the capital’s working class settled here in the late 1800eds, their lives were troubled by poverty, miserable housing conditions and alcohol. To some extent this is still the case. While flats at the fringes of Tøyen have been nicely upgraded in later years, the council flats around the centre are the first stop for newly arrived refugees. Traumatized families with several children are housed together with criminals released from jail, while drug addicts and the mentally ill are supposed to get by on their own after lengthy stays in institutions.”

Sounds bad. But I’d live there with a small living room and bedroom and call it nice. It’s downtown Oslo.
Given what I know of this guys investment history and blind luck, Oslo will get Olympia in 2022 just when he tires of living there because it will have become too trendy and upscale. And he will be completely surprised how much money somebody will pay him for his apartment that cost him an initial investment of five and a half bucks.

Tøyen is only a couple of stops on the underground from the central station. Probably one of the cheapest neighborhoods within walking distance of the city centre.