Originally published at: Man rescued after 11 days lost at sea floating in a freezer | Boing Boing 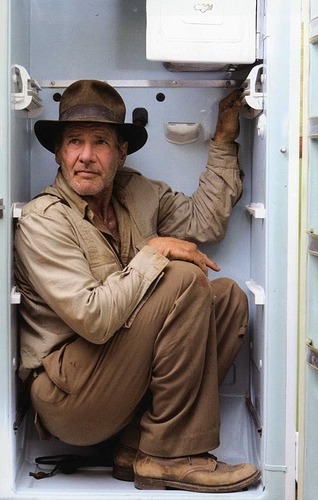 If you had asked me before reading this article, I’d have said that surviving for 11 days in a floating freezer was about as probable as Indy surviving that nuclear explosion in a freeze. I guess I was wrong (since Indy’s chances in real life were exactly 0).

I continue to be more than a little skeptical on this story. You simply cannot live 11 days without drinking and there’s no mention in any of the reporting of how he did this, except to specifically point out he had no food or water. He also allegedly didn’t sleep the entire time. The video shows him climbing a bit - after 11 days in a cramped freezer, he’d have at least partially atrophy going on. I mean, treated and released after 11 days without food, water, and sleep?

I’ve only once been on the ocean far enough to not see land. It was a bit of an odd feeling. Also the idea that you have like thousands of feet of nothing but water and darkness below you freaks me out.

Well, maybe don’t look up too and think about the thousand of feet of nothing above you either…

What made me skeptical was how close the corner of the freezer was to water level. Seems unlikely that it wouldn’t have dipped under water level at some point in the seven days and submerged. But I suppose it’s possible there is enough insulation in the freezer that it could float even filled with water, allowing him the dubious opportunity to bail it out.

In any case, he would have gotten a lot of practice balancing that thing if he was on it for 11 days, and maybe he was taking more risks when the boat was near.

I choose to believe!

After eleven days in the shark-infested waters

“They’re not ‘shark-infested’ waters,” Burgess said. “They’re ‘shark-inhabited’ waters. If there is infestation, it’s by us.” – shark researcher George Burgess

listen)) or Surinam, officially known as the Republic of Suriname (Dutch: Republiek Suriname [reːpyˌblik ˌsyːriˈnaːmə]), is a country on the northeastern Atlantic coast of South America. It is bordered by the Atlantic Ocean to the north, French Guiana to the east, Guyana to the west, and Brazil to the south. At just under 165,000 square kilometers (64,000 square miles), it is the smallest sovereign state in South America

Any word on how the freezer is doing? 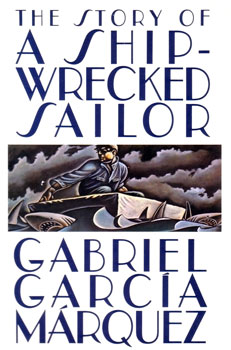 The Story of a Shipwrecked Sailor: Who Drifted on a Liferaft for Ten Days Without Food or Water, Was Proclaimed a National Hero, Kissed by Beauty Queens, Made Rich Through Publicity, and Then Spurned by the Government and Forgotten for All Time.

This was a similar situation, written about in a 14 part series of newspaper articles by Garcia-Marquez when he was starting out as a reporter in 1955. His writing is rather plain, as he is telling the story in the words and person of the sailor. The “long title” shown above does give a foretaste of his later style, though. The articles resulted in scandal for the Colombian Navy and government, causing Garcia-Marquez to change his career path.

This is a good read, though last time i read it i was in High School but i do recall really enjoying the writing style. I haven’t gone back to it since so i don’t know how well it holds up.

Three days would be pushing it, especially if exposed to the sun. 11 days, nope.

Oh believe me - the vastness of space is a mind fuck. But I can’t like fall into space… at least not from earth.

Neat story but I refuse to click on any links to CNN right now.

Good job he was able to keep his cool.

There are quite a few books on this exact topic.
One of my favourites was Adrift, the name of the author escapes me, but it was made into a very good film with Shailene Woodley.