Man stuck in mud is rescued by kind stranger

Poor guy looks like a wet kitten. I guess it didn’t occur to him to use the flat surface of the kayak to spread out the force needed to pull himself up (if he had the strength left)?

It’s crazy how low the river is. Along the whole length of the Mississippi there are spots like this that haven’t been dry in decades.
Just last week, a kid discovered a sunken ferry that had been under water for over a 100 years. 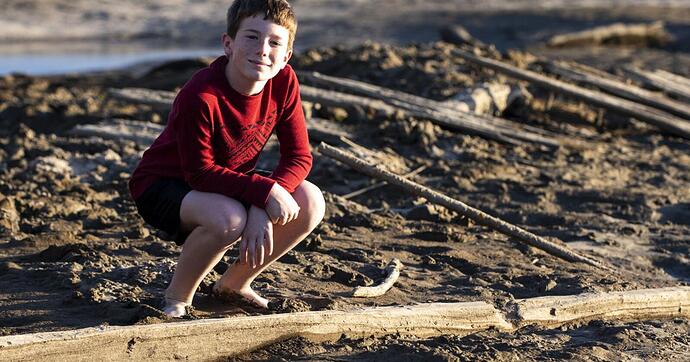 An 11-year-old boy discovered a Mississippi River shipwreck. He got the right...

Imagine if, as a sixth grader, you happened to find a shipwreck — and, after the general tumble of emotions, all you could think about was getting to school the

This is no joke. I was kayaking on the Kalihiwai River (on Kauai, near Princeville) and my back was sore so I got out of the kayak to step ashore and immediate sank my leg in to mid-thigh. Took me a good forty-five minutes to work my way out of it at which point I was utterly spent. Not “I’m tired from a hike, let’s go have a beer tired” but “I need you to drive us back to the hotel because I need to lie down tired.”

That’s about the most wholesome thing I’ve ever read.

I’m kind of surprised that no one attempted to hook him up to an F-150 and pull him out.

Agreed.
I’ve only been stuck up to about my knees before, but even that was really tiring. Can’t even imagine how this poor guy felt. No wonder he was about to fall down.

This is no joke.

Not at all. I’m thinking of a similar setup to the rescue boards they use up north for folks who fall through the ice.

But Bing Crosby and the Muppets both insisted that it’s a treat to beat your feet on the Mississippi mud!

Mississippi mud gets a bad rap, it just ain’t fair.

Whoever it was filming, she was thanking Jesus for pulling the guy out. I guess the bald guy with the stick, his name is Jesus.