This is so reminiscent of the Black Mirror episode “Fifteen Million Merits” that it’s profoundly disturbing.

that’s fantastic. may I suggest

There’s really promising stuff going on with VR spaces and live VR performance capture. Applying it to talk about a tragedy though is tone deaf over the severity and reality that people in that area are living through. Basically Zuckerberg could not be bothered to actually go to PR. Instead he used the aftermath as a way to pimp out his company’s VR tech. Sleazy as fuck.

I noticed @beschizza edited this out of his post, but I think it’s too brilliant to be deleted from the record. Re: the childlike avatars:

there’s something reflective of Facebook itself about it, too: infantilized, yet unpleasantly suggestive of malformed adults.

There’s really promising stuff going on with VR spaces and live VR performance capture. Applying it to talk about a tragedy though is tone deaf over the severity and reality that people in that area are living through.

New York Times has done some amazing 360 videos of war torn Syria and the refugee crisis still taking place there. There has been other 360 videos from disaster zones that gives a new level of journalism, making you feel closer to what is happening than just watching tv.

So I definitely think 360 videos and VR of Puerto Rico would be good but through a journalism lenses, not through a stupid demo of a VR chat room. Facebook has spent $1.5 million on organizations in Puerto Rico and sent some of their employees down to Puerto Rico to help rebuild cell towers. I pulled up the full video and it’s about Facebook’s partnership with NetHope and American Red Cross to do more rebuilding of PR’s telephone infrastructure. That’s great but what starts about caring about those effected by the hurricane quickly devolves into something a lot more sleazy as Zuckerberg starts selling his VR tech. Facebook Spaces wasn’t a good spot for that announcement and even if they felt like using the technology, turning it into a tech demo is so horribly wrong.

Yeah, there’s nothing inherently wrong with the tech but it just doesn’t sit well with me that Zuck is using what happened in PR as essentially a backdrop to showcase what FB is up to with VR. It’s disrespectful and exploitative of the situation.

It’s very good. You can even chuck virtual paper towels…

It’s Self-Satirizing.
Amazing how similar this is to these snarky adult cartoons.
Is this an example of Reverse Poe’s Law?
Why aren’t they drinking Caprese Martinis? 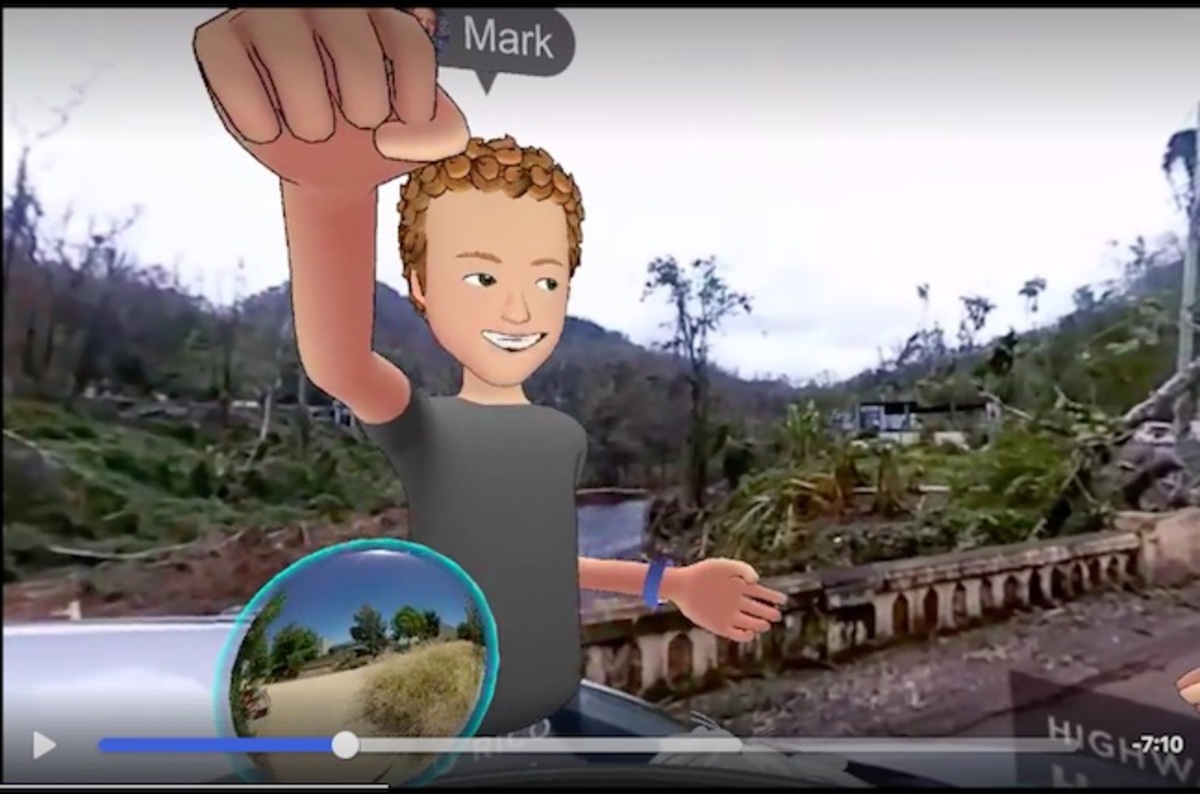 MZ probably thinks that being in a NY bodega is like being in PR.

I mean I guess its fashionable to be outraged about everything in 2017, but I seriously have zero fucks to give about this. He could have used more empathy to describe the plight of the people, but ultimately they did talk about what they were doing to help people connect with loved ones and improve the situation there. This wasn’t a sales video; this was a tech discussion about application of technology. I give facebook a lot of shit, especially for bankrolling that kek troll Palmer Lucky, and taking russian money to throw the US election. This isn’t one of those instances. They didn’t take up valuable resources by going to PR to get stock footage to hawk VR; they took some NPR footage and put themselves in it.