I recently read a book on the reformation. Holy moly what a bloodbath! I had no idea.

Luther wasn’t involved in the fighting, but Europe went bananas. It led the he Thirty Years’ War which wiped out 40% of the German population.

“You forgot to purge yourself with hellabore while you were preparing to fabricate this lie.”

“What light can there be in heads that hold such tangible darkness?”

“You curse, blaspheme, skriek, struggle, bellow, and spit, so that, if people really heard you utter words, they would gather with chains and bars, just as if you were possessed by a legion of devils and had to be seized and bound.”

edited to add:
“I can with good conscience consider you a fart-ass and an enemy of God.”

Not at all - I was agreeing with you.

I was thinking of maybe a little hammer and little doorway for the church at Wittenberg.

They’re entirely different things, but I can see how they can be confused.

When many scholars draw either a direct or indirect link between Luther and the spread of German-nationalist/supremist atheistic racialist anti-Semitism then there is a link. Calling Godwin on every mention of linkage to Nazi Germany would also preclude any discussion of WW-II or the holocaust.
I see especially American WASPs or their descendants love to invoke the Godwin card especially to silence directly affected minorities or those who understand that the end of the third Reich did not end anti-Semitism or other parallel movements.
At a minimum Luther did provide quotes form a racial German for genocide of unrepentant Jews which were used in Nazi anti-Semitic incitement.

Martin Luther, O.S.A. (/ˈluːθər/; German: [ˈmaɐ̯tiːn ˈlʊtɐ] ( listen); 10 November 1483 – 18 February 1546) was a German professor of theology, composer, priest, monk, and a seminal figure in the Protestant Reformation. Luther came to reject several teachings and practices of the Roman Catholic Church. He strongly disputed the Catholic view on indulgences. Luther proposed an academic discussion of the practice and efficacy of indulgences in his Ninety-five Theses of 1517. His refusal to renounce ...


(edit) Some examples:
*Obamacare is a Nazi plot=Godwin flag, White Christians can’t trot out a weird holocaust reference over national socialized health insurance.
*Jews did 9-11=no Godwin flag, these are anti-Semitic conspiracy theories which can be fairly compared to wackado Nazi comspiracy theories which replaced even some science and mathematics theories.
*XYZ wants to genocide the Jews/Israel=No Godwin, through history people have come for the Jews, the comparison or theory may be incorrect but there is a very strong historical basis for even paranoia.
XYZ is making war on Christmas by not wishing merry x-mas, just like the Nazis(I have been told this)=Godwin, white people are not allowed to appropriate an industrial scale attempt to wipe out a whole people for every thing they see as a bad thing.

For example white people may not appropriate the N-word nor joke or silence discussion on their enslavement of Africans. Likewise they also must stop dropping Godwin on every discussion about Anti-Semitism, it is not holocaust denial but it is a lesser cousin which silences discussion. Especially whites from the US must be sensitive as it was the university taught American white supremacist eugenics movement which informed the rising Nazi movement on racial purity.

(edit2)Before anyone says it even a model minority like Jewish people are not considered white for the purposes of discrimination and hate crime even in the US where they have recently become tolerated in the mainstream. https://en.wikipedia.org/wiki/Model_minority

You do know that Hitler was an Austrian Catholic, and that a significant source of opposition to the Nazi’s came from (portions of ) the Lutheran Church? Ever here of Martin Niemöller?

Your deeply ignorant and offensive comment ignores the murderous hatred Luther taught and what effect those writings had on an already deeply anti-Semitic Germany over the years. Behaviour of later followers of his namesake movement are irrelevant to discussion on the man.
Luther’s words “We are at fault in not slaying them”
(edit, add cite for quote)Luther, On the Jews and Their Lies, quoted in Robert Michael, “Luther, Luther Scholars, and the Jews,” Encounter 46 (Autumn 1985) No. 4:343–344.

Calling Godwin’s Law on someone is unwitting support of anti-Semitism? Seriously? Even if you were right, which you’re not, aren’t there much, much bigger fish to fry when it comes to battling anti-Semitism?

You seem to be a little confused. No one claimed that Lutheranism = anti-Semitism. Martin Luther himself, though friendly toward Jews in his younger days and eager to convert them to the “true faith,” became deeply anti-Semitic later in life (evidently due to their stubborn refusal to convert). This is well documented by the man’s own writings and those of others. His influence on 20th century German anti-Semitism is also well documented.

Pardon me for not being able to follow your logic, but I don’t see how Hitler’s Catholicism, and 20th century Lutheranism’s opposition to his program, refute that point?

In the first ten sections of the treatise [On the Jews and their Lies", Luther expounds, at considerable length, upon his views concerning Jews and Judaism and how these compare against Christians and Christianity. Following this exposition, Section XI of the treatise advises Christians to carry out seven remedial actions. These are
-to burn down Jewish synagogues and schools and warn people against them;
-to refuse to let Jews own houses among Christians;
-for Jewish religious writings to be taken away;
-for rabbis to be forbidden to preach;
-to not offer protection for Jews on highways;
-for usury to be prohibited, and for all silver and gold to be removed, put aside for safekeeping and given back to Jews who truly convert; and
-to give young, strong Jews flail, axe, spade, spindle, and let them earn their bread in the sweat of their noses. On the Jews and Their Lies

On the Jews and Their Lies (German: Von den Jüden und iren Lügen; in modern spelling Von den Juden und ihren Lügen) is a 65,000-word antisemitic treatise written in 1543 by the German Reformation leader Martin Luther. Luther's attitude toward the Jews took different forms during his lifetime. In his earlier period, until 1537 or not much earlier, he wanted to convert Jews to Lutheranism (Protestant Christianity), but failed. In his later period when he wrote this particular treatise, he denounced...

Taking a historical figure five centuries out of their historical context and then using a single aspect of their character to demonize them relative currents norms is, to be charitable, deeply ignorant.

Would you oppose a Playmobil figure of Edward the First or his fellow High Medieval Monarchs? why not?

If any German historical figure associated with anti-Semitism needed to be quarantined from the Kinder, the Germans would have damn little history or culture to share with their children. And it’s not just the Germans. The pogrom was an English invention. The Spanish took anti-Semitism to the next level. By the 19th century, the Russians were the more virulent anti-Semites. Does that mean we should ban Dostoesvky from our schools? what about Shakespeare?

Yes, by all means let’s discuss Martin Luther’s anti-Semitism. It was real. It was virulent. It contributed to horrors that followed.

By why does that make Martin Luther unworthy of an “action figure,” given that he is principally known for other achievements?

Wow, this has…gotten very heavy for a discussion about Playmobil 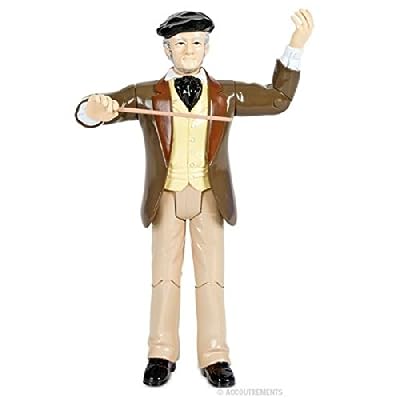 Wilhelm Richard Wagner was a man of many talents and interests, but his true passion was for the opera. Today he is primarily known for writing and conducting some of the most influential operas in hi ...

I’m not confused. As you point out, Luther’s anti-Semitism is well-studied.

Posters tossing truncated rhetorical bombs can sometimes best deflected with a rapid, equally truncated response. Simply shouting “Hitler” explains little; my intent was to “muddy the water” for anyone who that the original poster provided any insight.

With time, people will hopefully create posts exhibiting more nuanced and comprehensive understandings, as you have done.

Ooh painful. Google is brutal. This contains no meaning in German.

When did Doctorow stop bothering with fact-checking or, indeed, basic reading comprehension? I haven’t kept a log or anything, but I really recall him being a much more conscientious writer. What happened?