Maybe the coronavirus emanated from a China research lab after all, say US and UK intelligence

ONLY when it’s benefits him. I wouldn’t touch this theory with a ten foot pole.

“It’s definitely a real possibility being bandied about at the high levels of the administration,”

Yeah, from this administration? I’m going with conspiracy theory.
Grasping at straws to distract, find a scapegoat, a target.
They’ve been preparing to go this route to find blame since our mass-murder-in-chief tried to call it the China Virus.

Maybe it did escape from a Chinese lab. There are conspiracy rumors that it was developed here in the states first. It doesn’t change the fact that this administration’s incompetence, inaction and ‘free-market’ politics is costing the lives of tens of thousands of Americans, and millions more facing economic hardship.

I think we need to focus on fighting the pandemic, not assigning blame 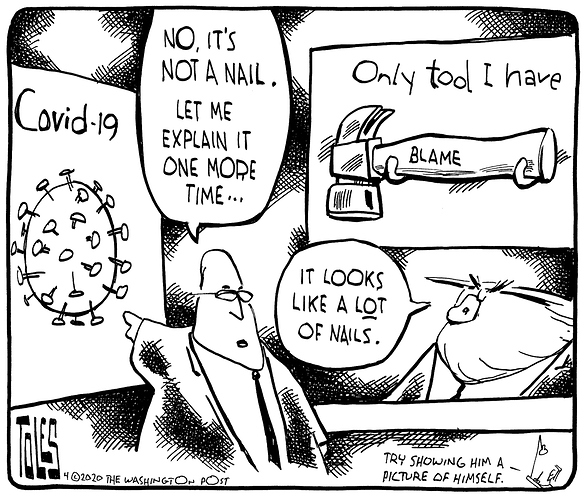 If only someone had a sharp pointed object.

Hrmm - while I don’t think it is impossible, it is best one is absolutely sure before making wild claims and accusations.

“Sheesh. Look, it’s highly improbable, but not impossible. And since the guys on the top insist it’s true, we’re looking into it. Don’t hold your breath, though. We’re just doing it because we were ordered to.”

My first response is, “so what?” Does it change, in any way whatsoever, the steps that need to be taken right now. Does it excuse any of our lack of preperation? Is there fuck-all that can be done by john Q public in response to this accusation?

Fine, let the responsible authorities sort it out. Trump has denied any responsibility, so that leaves him completely out of the picture.

I really didn’t expect this place to start falling into Crackpot Theory Land.

There’s a difference between biological weapon development (the crackpot theory) and mishandling of natural virus samples (what the post is talking about).

Hmm, yes, floral, woody, vibrant. I’m getting hints of oak, cherry, and cardamom. There’s also a lovely metallic undertone coming through, such a smoky, smoldering scent that just positively screams money. I haven’t smelled anything quite like it since we last cracked open some of that good ol’ 2003 vintage, you know, the one with the hidden aluminum tubes.

Funny, I just saw this twitter thread explaining why this is extremely unlikely: 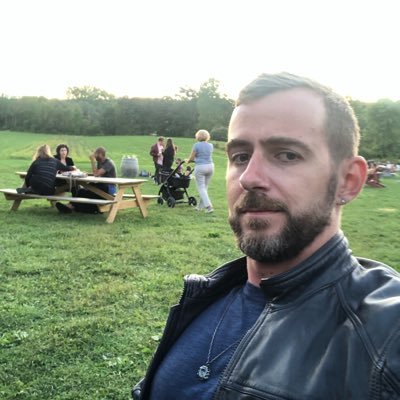 Recent attempts to blame China for SARS-CoV-2 have argued that it could have been released from a poorly regulated laboratory in Wuhan, as @IgnatiusPost does here. This sounds more reasonable than the bioweapon accusations, but there is strong evidence against both claims. 1/x twitter.com/IgnatiusPost/s…

Seriously? Have we learned NOTHING from the GOP manufacturing “intelligence” to justify the Iraq invasion? Are we really going to fall for this again? Saying “well, it COULD have happened” is not reason to spread what is clearly an attempt to shift blame to China. This administration and its right wing UK allies will do anything to point a finger at China. Let’s not help them till there is proof lest we contribute to some growing critical mass that leads to another lie based foreign relations failure.

I don’t consider the idea to be in crackpot territory–they have a level 4 lab right there in Wuhan and there have been past incidents of researchers disposing of research animals by selling them. It is unlikely that this can ever be resolved either way as if it’s true it’s unlikely that more than few people know it and it’s basically impossible to disprove, either.

However, at this point I see absolutely no reason to trust His Flatulence or any organization that is under his authority on something like this. He makes Baghdad Bob look credible.

Seriously? Have we learned NOTHING from the GOP manufacturing “intelligence” to justify the Iraq invasion? Are we really going to fall for this again? Saying “well, it COULD have happened” is not reason to spread what is clearly an attempt to shift blame to China. This administration and its right wing UK allies will do anything to point a finger at China. Let’s not help them till there is proof lest we contribute to some growing critical mass that leads to another lie based foreign relations failure.

I disagree on Iraq. What happened with Iraq is that we destroyed the real WMD but could never catch stuff that only existed in the reports of underlings who didn’t want to be punished for failure. They were lying to Saddam, we didn’t realize they were fabrications. We had the same problem with the Soviet economy–our estimates were based on what the Kremlin was being told was being produced, not what really was produced.

Nope. Your estimates of soviet bomber power were based on what your armed forces and intelligence thought would get them what they wanted. Which it did.

Tangent: 20 plus years ago it was us mutants and mutant-adjacents who were the conspiracy people. But those were FUN conspiracies - aliens and weather control and acid experiments. - and we’d meet at devo shows and church of the subgenius events and Robert Anton Wilson readings and blur the line between wink wink dry satire and sincere smartypants skepticism. And now the normals have made conspiracy theories mainstream and they’ve sucked all the fun out of it by making everything a weapon of political warfare. Thanks internet.

Until I hear a plausible explanation from someone accredited to make the statement I am not going to assume this was man made or done in a laboratory because even though we live in a crazy absolutely batshit nuts world right now, this is another level batshit nuts on top of it

What, Twitter doesn’t rise to your precious standard? How about mere speculation and out of context quotes delivered in Newspeak? You almost sound like you prefer credible, source-based information to “I’m not saying they did, but they probably might have did” equivocation.

/s all of that in case my frustration at this post bled over too much.

If it were true – and I’m open to that possibility because mistakes happen, and people love to fuck with things they shouldn’t – I’d rather we weren’t hearing about it before it’s confirmed and no longer a rumor. Confirmed by facts, not by the fountain of never ending lies that is Trump.

Many people of Asian descent are already having a tough time at the hands of the ignorant without this fuel tossed on the fire.

But I guess there’s no stopping stupid, especially if it’s backed by xenophobia.

Sure, when it’s convenient to his purposes. Expect it to change as soon as the wind changes.

Just because something is seriously considered doesn’t mean that anyone actually thinks it’s true. It’s like how they have a contingency plan in case we’re ever contacted by aliens. It’s smart to think about it just in case but nobody actually thinks that’s going to happen.