Originally published at: Michel "Away" Langevin of Voivod on 10 albums that changed his life | Boing Boing

Voivod has been a gem in the metal world, since the 80s. What’s the likelihood that a band would come out from a pretty non-existent music scene, to make such eclectic music? Beautiful stuff.

First saw them in the student radio station library, and they really stood out, the covers as well as the music. One of those bands that might have had all those influences yet still lept out as unique. 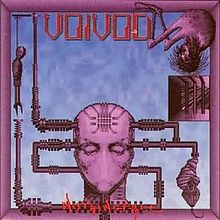 I’m embarrassed to admit though I get the words Voivod and Voidoids (Richard Hell and the) mixed up all the time.

You have Voidvod in the first paragraph

Got into them with Dimension Hatross. Just incredible rhythms and inflections. The first thing I ever bought on the internet because it was out of print and not available anywhere. Still one of the few albums from that time that I can enjoy from start to finish, just weird enough that I never tire of it.

Thanks! Words like that wreak havoc with my dyslexia.