because they used to license them for peanuts.

Through Time/Life, and then Lionheart Television - which IIRC was sometimes subtitled “The BBC in America”. Most of the series I grew up with in the US were either from the UK or Japan. No wonder I never socialized to US culture!

Sounds like honeypot time! Start a bonfire somewhere and then from elsewhere nearby, you can ambush them.

Lazytown, a surreal show from Iceland that has mixes actors and creepy human-ish puppets; it pushes exercise and good nutrition.

When my kids were little, I remember getting home from like my fourth 20-hour workday in a row. I sat down on the couch to hang out with them for a while before I went to bed. But I started dozing off and found myself in this sort of hypnogogic half-awake half-dream state. And as I realized I had dozed off I was focusing my eyes on what turned out to be Lazytown and felt really disoriented, like a psychedelic flashback or something. “WTF is this? What is happening!”

Except rural is left fucked and TV starved because ‘low power’ means ‘low distance’ without highly specialized reception gear, and in personal experience ‘digital’ tends to be ‘either you have it or you don’t’ with no real between state.

I had no idea Lazytown was Icelandic. I’ve never seen an episode, but a decade or so ago my niece and nephew were obsessed by it. They are both high school track and field team members these days, so maybe it did have some effect.

Sounds like honeypot time! Start a bonfire somewhere and then from elsewhere nearby, you can ambush them.

Hard to ambush someone with an IR eye in the sky, don’t you think?

Tealight candles under clay pots in a clearing making a rude message/symbol would be more stylish. Or IR LED throwies. 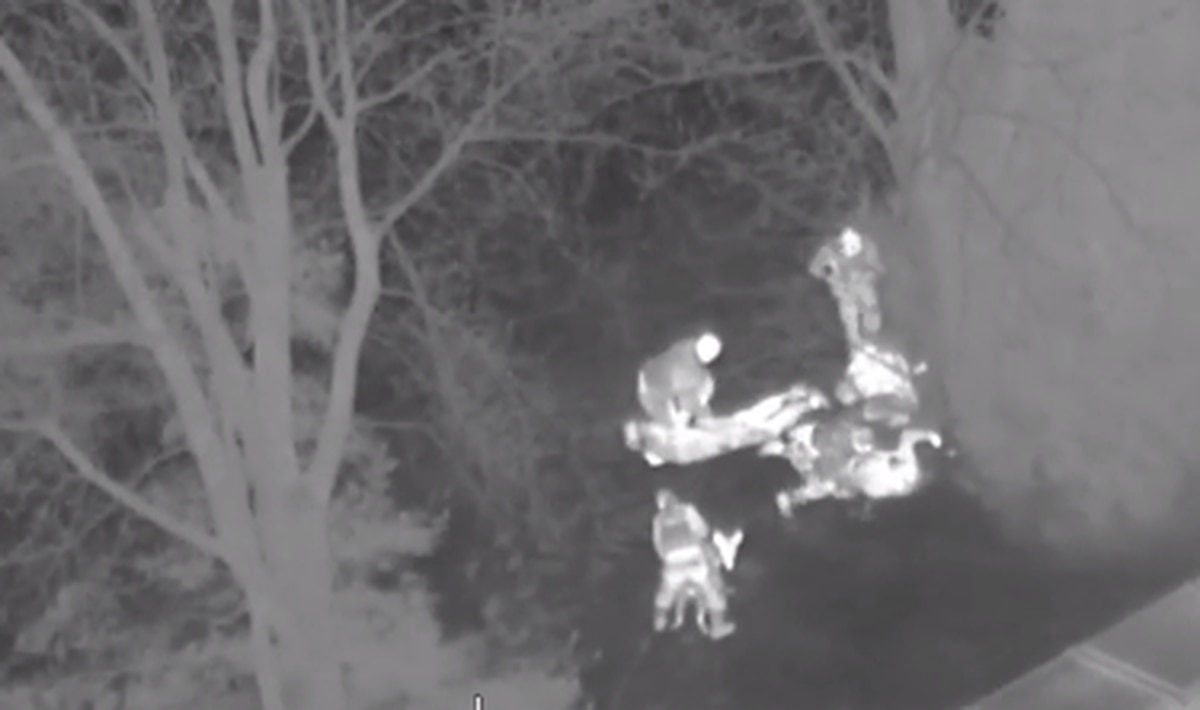 Black-and-white images, shot by the police helicopter, shows the crew guiding a dog handler and three other officers towards the suspects, who raise their arms, then drop to the ground to be handcuffed

Hard to ambush someone with an IR eye in the sky, don’t you think?

Don’t you suppose if that helicopter was going after the bonfire, that is what they would be monitoring? That’s where the “from elsewhere” part is used. An ambush without a diversion isn’t much of an ambush. And if you know where they are, and what they are aiming their IR assembly at, you might be able to compromise it.

I spawned off another topic for this:

Blue Thunder: Days of Future Past. Are we there yet? wrath

Back in the day (1983), there was a movie Blue Thunder, about military surveillance tech on a helicopter, turned towards the civilian sector. (It spawned a couple of TV series: Blue Thunder and Airwolf.) It also involved a lot of shoot-things-up hardware, but that’s hopefully besides the point. Here in Northern Greater Toronto, living between two local parks, I do get a chance to observe York Region police helicopters as they cruise the local parks on weekends, on nights with perfect flying we…

That’s the problem we had here. After we cut the cord ($250/month is too much for TV we rarely watch), the family got a little antsy so I got one of those antennas, with built in signal booster (and a long cord because necessary). But every time you wanted to change channels, you didn’t just have to adjust the rabbit ears like we did when I was a kid, you had to move it across the room to another wall, try different heights and angles until you got a garbage signal, then adjust the antenna until it worked. By the time you were getting the station in consistently, the show was over and you wanted to change channels again, so it was time to rearrange the living room and start over.

It’s kinda sad - there are still some stations out there broadcasting (I liked the one that showed classic TV shows, and there were a couple other good ones that we could sometimes pick up out of the 8-12 in our area, but only at different heights on different walls) but the antennas today have regressed to stone age tech compared to what we had 30 years ago, so no one will ever receive the signals.

“Have Gun Will Travel” is not low-quality garbage… but CHiPs is.

I grew up watching CHiPs, I learned about botulism from an episode of that show and I’ve never had botulism, so that’s something.

When you hear facts or revelations about millenials mentally replace the word with “people who are approaching 40” and see if it still makes a lick of sense.

^^^ I’m (apparently) a millennial, and I’m thirty seven this year, so I grew up with tv via an aerial.
Mind you, here in the UK, we had two channels of BBC (so no adverts at all), along with ITV (bit rubbish) and Channel 4 (good, but some adverts), and eventually Channel 5 (generally rubbish, but also soft porn at night), so there was usually something good on.
It’s the advantage of living in a relatively small country with a high population density: Broadcast technologies generally work well as you can cover a lot of people with a relatively small number of transmitters (1182 for the whole country apprently).
As far as I can tell, a lot of people here still use an aerial to get what is now about twenty digital channels. And yes, the BBC channels still have no advertising (except for their own shows, but that’s limited to between programs only). Personally about the only time I watch live TV is for sport, everything else is streamed.

Or the worst reception state of all which is “clear picture when your hand is on the antenna adjusting it, and nothing but digital breakup as soon as you let go to sit down…”

I keep telling people, move the HD antenna outside and get it up off the ground level. Inside your house is an excellent thing called a Faraday cage and it effectively shields you against all that electromagic radiation. Now it may not be a perfect Faraday cage (like the one Gene Hackman had in his safe house in Enemy of the State ) (remember the chain link fence in office?) but you’ll likely see dead spots caused by electrical wiring and metal water pipes as well as metal structural supports hidden from view inside the walls.

That’s called cross-coupling ground state effect. You probably have a really small antenna.
(In the words of Bender Rodriquez “funny place for an antenna”) I keed, I keed.

Because indoor TV antennas are a compromise solution, so if the signal is weak you have to put one or more antennas on the roof, like this: http://www.associazionemarconi.com/public/images/antenne_alte12_10_2014c.jpg

You call it cross-coupling ground state effect. I call it a pain in my ass.

You probably have a really small antenna.

36" rabbit ears with a 6x8 squared loop in the middle.

And as I realized I had dozed off I was focusing my eyes on what turned out to be Lazytown and felt really disoriented, like a psychedelic flashback or something. “WTF is this? What is happening!”

CORRECTION: Lazytown is on the Sprout network, not QUBO.

(Related fun fact: Network TV affiliates use Saturday morning as the dump for their “Enlightened Television” shows; required programming of educational value for young people. Some networks show, or showed, blocks of tame, bland, kiddie-friendly programming from other networks during this time. This includes Sprout and QUBO. So, even though made-by-network Saturday morning cartoons are a thing of the past, kids could still watch cartoons and other kiddie programs on weekend mornings.)

The other “Whaaaa?” Sprout show I enjoyed watching while half-asleep on the couch on Saturday morning was Tree Fu Tom, about a boy who magically shrinks himself and interacts with CGI bug people. Tom has magic powers activated by doing athletic stretches, kind of kiddie Tai Chi, which he asks the audience to follow along with. (“Thanks for helping power my spell!”)

Yes, but the entire time that I was growing up, we never needed a roof antenna, even in a valley of a hilly area. Out in rural areas far from the stations, a roof antenna was needed, but not anywhere near a city or suburb. Back in the '80s, a little portable TV with a fold-out telescoping antenna worked fine. If you’d needed to strap one of those full-size roof antennas on, there would never have been portable TVs.

Digital broadcasts must use a much weaker signal or something.

Yes, but the entire time that I was growing up, we never needed a roof antenna, even in a valley of a hilly area.

This… actually got decent signal with the converter and regular rabbit ears in the basement where the tv was… on cutover day the digital signal went to crap and my research said I need a roof antenna, and one that can change directions. Since we never watched that much anyway it wasn’t a big loss.

It also helps that the BBC put even most for profit channels world wide to shame. You don’t neccisarily need more than few channels when those 2 BBC stations are producing more and better content than the rest of them combined. I’m a bit younger than you. But we were both born during the very early years of cable. And until I hit middle school cable was a thing, but it was an expensive thing that may or may not have been available in your town. For a few years there we had scored a bootleg hookup. But most people we knew didn’t have cable consistently till I was 8-10 years old.

So “Millennials” are supposed to be people born in the 80’s and 90’s right? I seem to remember most working class families at least having rabbit ears if not a roof antenna during those decades. What did their kids think antennas did?