The new "Cosmos" is getting great reviews

count me in as one more positive review. I really enjoyed the tone of the show. First of all it avoided the terrible production and editing style of History Channel type shows. Second of all, I couldn’t see Seth MacFarlane’s fingerprint anywhere. I was quite pleased about that.

How do you not have access to OTA channels on your tv?

Sometimes a cord cutter isn’t just saying “I hate paying my asshole local cable monopoly”, but really saying “I’m watching too much TV because it’s too easy. If I turn off the endless spigot and make it so I have to actively seek out something I want to watch, I’ll only watch the good stuff and have more time for other activities.”

I forget what time it was last night that I finally settled down to watch TV and sighed and asked myself, “With this many channels why is there nothing good on?”

It must have been after Cosmos was on because with multiple channels running it I can’t believe I didn’t see it in the listings. Well, fortunately my local cable company has a nice replay service where I’ll be able to watch it tonight when I’m sure there won’t be anything good–or at least not anything better–on.

OTA=Over The Air. As in free. No cord.

Cosmos was broadcast on National Geographic (cable), but it was also broadcast on Fox, which is free TV most everywhere I can think of.

I’m saying “cord cutter” is a broader term than just “I dropped my cable company”. It also includes people who are actively trying to watch less TV by making it difficult to just get a constant stream of random stuff.

This is as opposed to the people who tell you they never watch TV ever period. These people still watch shows, but only ones that get enough praise from their peers that they’re worth seeking out and watching.

Okay, I might’ve missed your point. But it seems like you misread what Maggie wrote.

premiered last night on a bunch of channels I don’t have access to on my TV. [Emphasis mine.]

That certainly suggests that:

Thing is, everyone in the US who has a TV and lives in or near a city/metro of any significance has access to a Fox affiliate. I gather Maggie lives in the Twin Cities metro, so she certainly has access.

How do you not have access to OTA channels on your tv?

If I didn’t have cable, I wouldn’t have been able to watch the show. Even though I live in a small city, we have only one television station that I could pull-in using an antenna. The PBS station run by the local university. I would have to put-up at least a 30’ tower with an antenna to get some of the OTA channels broadcasting from a city 60 miles away. And, even then, there’s no guarantee I would be able to get the FOX affiliate.

My antenna doesn’t pick up Fox.

Maybe your antenna is too liberal.

it was AWESOME! 3 huge cheers for Neil deGrasse Tyson for opening with quick recognition of Sagan, then driving an absolutely brilliant show that, if we can GET kids/teens to watch? would definitely spark interest in science.

This is what we need, Heroes of Science, so we can have some advancement, instead of the desire to become an actor/sports star/prostitute or wahtever quick path to riches the media is feeding everyone.

It’s on Fox, so count on it being out of order and cancelled despite the fact the FANS CLEARLY WANT MORE STORIES ABOUT MAL AND THE REAVERS!

… sorry, lost my train of thought for a second there. Looking forward to it.

It’ll be rebroadcast on Nat Geo tonight, if you have it.

I wasn’t around when Cosmos first showed. However I saw it during rebroadcasts since I’d only missed it by a few years and it was still fairly relevant. This time I’m getting to see it as it happens, but Cosmos isn’t for me. Sure I’m a science nerd and found the experience fairly enjoyable, but Cosmos isn’t for us geeks. It’s for those that aren’t sure of this whole ‘science’ thing and need a gentle nudge to see what they’ve been missing. Granted your typical lecture about Infinity or Zero or whatever is about as interesting as watching paint dry, but that’s where Doctor Neil Degrasse Tyson really shines. He’s a man that engages and brings a human element to his talks simply by being excited about the stuff he’s talking about. This is also where Carl Sagan excelled and the reason eight year old me found the original show fascinating wasn’t just the facts, but that these facts were given to me by someone who was excited about the whole experience. Trust me after having puttered around trying to absorb whatever bits of interesting I can, failing college because I got bored and distracted, and constant frustration at History and TLC turning away from education to ‘Reality’ TV I understand how big a difference presentation makes. This show nails that part down pretty hard.

Sadly with TV being what it is almost a third of the hour long time slot Cosmos was given is trying to sell you something, and the constant break for commercials after every single little transition was quite jarring.Sad really, but I suppose one takes what one gets and frankly I’m grateful Fox has put forward the sort of effort they have at trying to put forward a show going on at how important Science is when they’re a network I at least mostly associate with wing-nut politics that take the stereotypical anti-intellectual christian stereotype and run with it. Sure I suppose with shows like Fringe and Too Human that really shouldn’t be the case, but on the whole it’s a network I associate more with Family Guy than Fringe.

Speaking of, Seth McFarlain (guy that created Family Guy) stuck his neck out pretty far to make sure this show got made and aired. Seth, I might think Family Guy is a steaming pile, but dude I gotta respect you for getting this show on the air. Thank You.

It isn’t perfect and the commercials constantly broke immersion for me, but they did well enough that I want to see more. Fortunately it will be showing on a weekly basis on Fox every Sunday at 9 Eastern, and again on Mondays at National Geographic plus Hulu and there’s already an upload of the first episode on youtube (that I’m hoping gets left up, but if they took it down to make room for it on Google Play I wouldn’t be overly surprised.) I want this show to do well because I want a new generation to be inspired to look up down and all around while asking questions about everything around them.

Originally from my blog: http://t.co/osvGGk9XGE

So far, so good. I’m hoping that at least one of the many spokespeople for God on FOX News will learn the true definition of ‘theory’.

I had to turn it off. Unwatchable. Too many cheesy ads. Least common denominator script, cheesy, overblown special effects, cheesy music. He dressed sloppily and the camera work was overblown with those cheesy cartoons.…the whole thing was not classy and not even half as good as Carl Sagan’s excellent series.
America is dumbed way down again. Take a page from the BBC and their planet series.

Yeah, he’s not a dapper dresser like Carl Sagan… 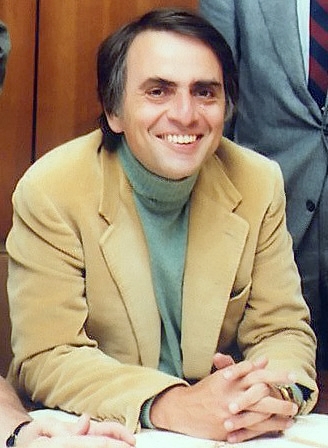 Haven’t seen it, but it based on comments and other reviews it appears they oversimplified why Giordano Bruno was executed by the Inquisition.