Minority rule in the United States is getting worse

Originally published at: Minority rule in the United States is getting worse | Boing Boing

Things are coming to a head politically. The Republicans have succeeded in politicising the judicial branch. If the death-cult party keeps the Senate and gains an effective majority in the House they will abuse the powers of the legislative branch to ensure that it becomes a permanent situation. They’ll also spend those two years ensuring that the outcome of the 2024 election will be permanent control of the executive branch.

At that point the U.S. will undeniably be a Putin-style one-party sham democracy catering to the economic requirements of wealthy Libertarians and the social dictates of white supremacist Xtianists. If they don’t get their way the alternative will be more terrorism and blockades to force the issue.

Some here are already effectively living under that regime, but it will become more widespread if we don’t do what we can to stop it now.

There can be no doubt about this sorry situation. It’s been the wet dream of republicans all my life (and i’m old). My uncle in Wyoming used to dance a literal jig and sing “I’ve got three times the vote you’all have!” …thank you electoral college. Then there’s the senate which was designed not to be majority representative. Then add in gerrymandering, and now overt voter suppression, and a ‘packed’ supreme court and here we are. I wish the Democratic party would dump lots of ads directly addressing these threats to democracy. And there should be some sort of political science ‘index of democracy’, where say Russia scores near 0.0 and …Iceland(?) scores a 9.7 so this creeping horror can be tracked over time (IOD for the states being around 6.1 and dropping fast) -sigh-

And I just saw this a moment ago, elsewhere on the intertubes… 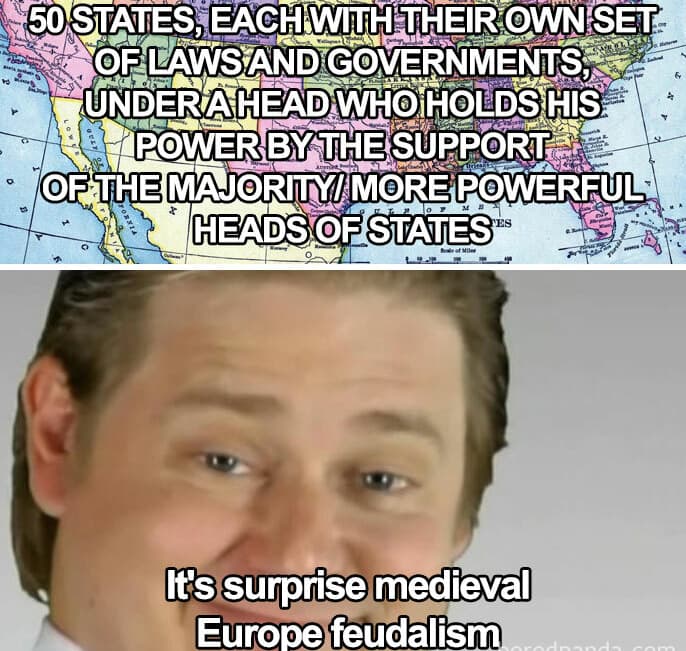 One can take issue with the technical accuracy, perhaps, but at the same time perhaps it’s harder to disagree with the principle it illustrates.

These systems we live under only exist because we’ve collectively agreed they should. We changed them, before. We could do so, again. We probably should start thinking more about that…

These systems we live under only exist because we’ve collectively agreed they should.

We didn’t “collectively agree” to systems like gerrymandering which deprive the majority of proportional representation. A lot of the rules were put in place by those in power specifically because they knew that they wouldn’t be able to keep their jobs if “collective agreement” had anything to do with how the government was run.

I believe that the term you are looking for is “tacit consent.”

My uncle in Wyoming used to dance a literal jig and sing “I’ve got three times the vote you’all have!”

One possible scenario might be a new kind of civil war: states, counties, municipalities, even individual prosecutors defying the dictates of the next level up of government. It would be a mess infused with constant terrorism and disruptions that would make living life as we currently know it impossible for a lot of Americans (assuming they would even call themselves that anymore).

Unfortunately, this scenario is very plausible, somewhat more so than a fascist federal government having complete control. What doesn’t change in any scenario – including the status quo somehow continuing – is the the unrepresentative right-wing populist and Xtianist and white supremacist minority wielding disproportionate power is always the main bad actor.

minority rule paired with no gun control seems very, very fragile. one of those has to give eventually.

Minority rule is the reason that gun control is so weak in the U.S. Fragility leading to collapse is one of the reasons behind it.

Aren’t you forgetting what Nixon told us about the silent majority?
Yes, THAT IS sarcasm

In addition, Thorstein Veblen in The Theory of the Leisure Class would remind us that
“In point of derivation, the office of government is a predatory function, pertaining integrally to the archaic leisure-class scheme of life. It is an exercise of control and coercion over the population from which the class draws its sustenance.”

Like A new low for global democracy | The Economist perhaps? Which shows pretty much what you suggested btw