Yeah, sad stuff. I’ve gathered before that when it came to family life, Zappa often took a crappa.

The song was good for at least the first 10,000 repeat plays on the radio.

Man I do not miss radio.

Yeah, sad stuff. I’ve gathered before that when it came to family life, Zappa often took a crappa.

From what I heard from mutual acquaintances when I was a teenager, that house in the Hollywood Hills was very chaotic (and not in the good way one might associate with Frank Zappa). None of their friends who visited ever saw Frank and Gail was not what you’d call a kid-friendly person. Then there was some kind of rift between the siblings over the estate after Gail died. I hope that Moon, who was never a “Valley Girl” herself and was by all accounts a nice person, has found peace after all that tumult.

The song was good for at least the first 10,000 repeat plays on the radio.

That and inspiring the movie that gave Nicolas Cage his first starring role. 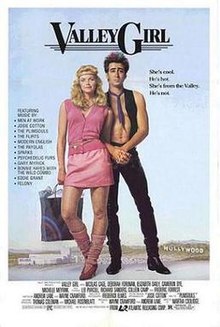 Valley Girl (also known as Bad Boyz ) is a 1983 American teen romantic comedy film directed by Martha Coolidge and starring Nicolas Cage, Deborah Foreman, Michelle Meyrink, Elizabeth Daily, Cameron Dye and Michael Bowen. Valley Girl was released in the United States on April 29, 1983. The plot is based loosely on Shakespeare's Romeo and Juliet. Julie Richman is a Valley girl who seems to have it all: good looks, popularity, and a handsome Valley dude boyfriend, Tommy, but she is having second t...

I rarely sit through long interviews like that for the full length of time but that one went by fast and was very interesting.

Never a fan of the song or Zappa but Moon seems like a lovely person.

The Winters bio on Frank explains what happened. Gail hated Frank and mini Frank that’s why Dweezil got pushed out of the trust. Frank said in a public interview he comes home with the clap and we take a little pill, with her sitting right next to him. Watch her try and explain it, you see it it and hear it. She loathed that dude.

She strikes me as very smart and level headed despite it all. I imagine there’s a lot of good therapy work behind that – what a messed up childhood.