Muppets tea-ad is brilliant (shame about the tea)

The Muppet’s got their start making commercials for Coffee. Kermit was a bit of an asshole in some of those.

Customizing it for local coffee. Here’s one for “Red Diamond Coffee” which worked out of Birmingham Alabama.

I’m sure other people have memories of the same type of muppet commercial selling coffee or tea local to their city.

Yep, and when they appeared in the early days of “Saturday Night Live”, the smoke during the sketches wasn’t because they were playing firefighters.

My Muppet Babies-watching inner child had a giggle when Baby Animal popped up.

And I wish they’d used this Nilsson song instead:

is there an ethically sure route to decent tea? (I happen to like FTGFOP Assam, sourced from Uptons.)

As with coffee, there’s “fair trade” certification for various teas. However I’m not sure how stringent the vetting process is, or if that’s just a way for companies to say “we’re not as awful to our workers as the other guys”.

from the linked article:

Auditing by the Ethical Tea Partnership, which certifies estates for some of the biggest names in the industry, including Twinings and Mars Drinks, failed to detect the trafficking.

I practice both tea and coffee snobbery.

This is nothing new. Sir Thomas Lipton was actually part of the original Muppet Show cast. 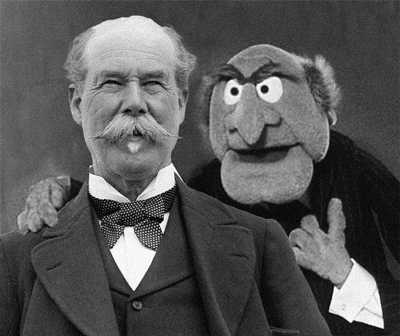 Now hang on here. Lipton is perfectly fine for iced tea. Of course loose leaf tea, or other teas are better for basic cup of tea. And I hate that people have never experianced a cup of perfect tea…with loose leaf, boiling water, a tea strainer. (lemon, sugar, milk optiona in the cup).

But for iced tea. Lipton is actually preferred. It makes a rather clear iced tea --add a pinch of baking soda to counter act the tannin and clear it and round out the flavor.
Using lipton tea bags for ‘sun tea’ is good…a few tea bags in a large jar and sit that out in the sun for an afternoon for long warming steeping. Amazingly smooth.

And don’t put it in the fridge until it cools to room temp.

Q: Why do Communists insist on tea bags?
A: Because proper tea is theft.

Yes, but if you ask for it in an American restaurant, be careful as they may give you sweetened ice tea.

I much prefer Luzianne tea over Lipton. But I like mine really strong and I think Lipton gets more tart as you try to make it stronger…

The whole Liptons thing is weird. They used to be (many moons ago) a supermarket in the UK. For some reason, their tea got associated with the British style of tea in loads of countries (France, Spain, USA etc) even after Liptons had disappeared in the UK. I was always baffled to see it in France or Spain when I was kid - “didn’t Liptons shut down mum?”. The only time you really see it in the UK is in the form of Liptonice, a cold lemon tea drink that was invented for the Spanish market IIRC and reimported to the UK. Their tea-bags when I’ve had them in France or Spain or the US are ridiculously weak IMO and also get tannic if you try to make the tea stronger by stewing them. Clipper, Glengettie, Yorkshire FTW.

You don’t need loose leaf tea. There are very good teas in tea bags. Williamson Tea is a good example.

“Be more X” seems to be an up and coming snowclone.