I’m a bit of a headbanger. My five-year-old loves to rock out to this particular arrangement of The Brothers Gibb plus The Brothers Young:

ETA: Of course, any Bee Gees is kinda dangerous to play at work when you use a standing desk. I think I’m attracting undue attention while working in my boogie shoes.

I’m still hooked on the Nelly+Gibb. I can hang with this bassline now.

Also in completely unsolicited disclosures, during thanksgiving me and the family were doing our first rendition of Thunderstruck, and I got a bit carried away with that move where you hit the symbol thingees with the headstock thingee. 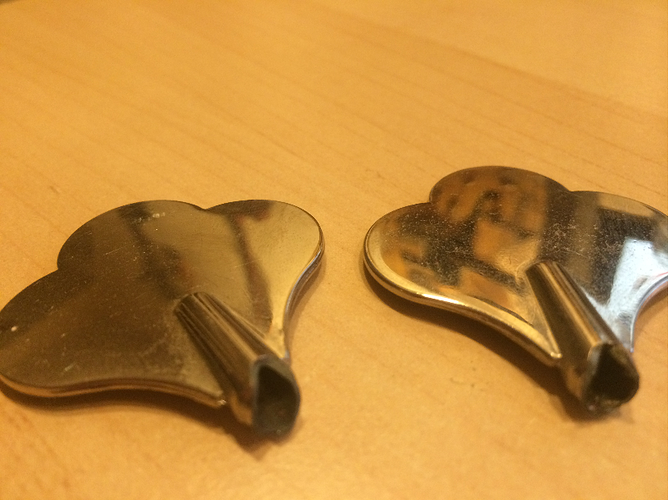 Looks like those come off a bass guitar. I always pictured you as lead. Bass and Vocals: Funruly ?

Those did come off my first and (so far) only bass. It is preceded in my stables by a couple solids, an archtop, and an acoustic.

My guiding lights for guitar philosophy come from Malcom Young, via his brother Angus:

Mal is too lazy for that, playing leads interferes with his drinking

My favorite phrase about this style of playing is that all you need to play it is five strings, two notes, two fingers and one asshole.

Wish I could sing. Vocal lessons is on my bucket list, but for the next decade I’ve already decided I need to learn more coding. I don’t think my singing would ever pass the garage stage.

My guiding lights for guitar philosophy come from Malcolm Young

My single favorite guitar hero. For years now I’ve wanted a Gretsch Jet Firebird like his, but couldn’t really afford one. But my lovely, lovely wife just got me this, as a combined birthday/Xmas present: 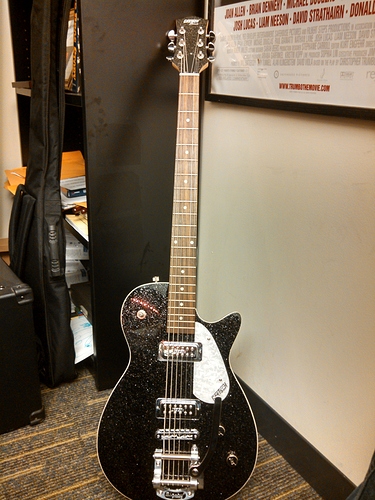 The G5265 Jet Baritone. Oh, I am over the moon! A lifetime of cheap, crappy secondhand guitars, and this year I finally get two awesome new ones (I got an Epiphone ES-339 Pro a few months ago). I feel like the luckiest guy alive… even makes up for being almost too old to rock and roll and not quite too young to die.

I don’t think my singing would ever pass the garage stage.

This is what needs to happen: The BoingBoing Bad-Ass Bar Band. All our spouses and kids can go to hell for a weekend or two, and everyone flies out to the little music studio next to my garage, pounds down eggnog, and rocks old AC/DC covers until somebody’s ears bleed! 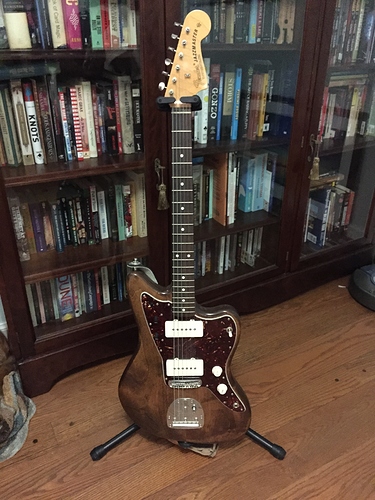 If we’re talking band, I’ll have to play my Jazzmaster. It is some Elvis Costello model, as it has his “signature” on the back of the headstock. Some interesting gentleman on Ebay listed it just as I wanted a Jazzmaster. He proceeded to talk himself in and out of selling it to me about 6x, even tho I was offering his asking price. It is worth the trouble.

I keep it and a Blues Jr. next to my standup desk. My go to guitars tho, are the acoustics.

Once, there was recording studio in my home. They removed all the equipment when I bought the house, however but left the insulation (and the red light over the booth.) I am pretty sure we could work a deal for some time from the folks at the Village Studios in LA if we wanted.

I’ll have to play my Jazzmaster.

That’s a pretty one. I like that finish a lot.

Once, there was recording studio in my home. They removed all the equipment when I bought the house, however but left the insulation (and the red light over the booth.)

That’s great! It’s so cool to have that kind of space. In our case, we bought our place from a couple who only owned the house a year and a half, long enough to renovate the kitchen and both bathrooms and get about $250K more for the house than they paid for it (boy, we were suckers to buy in 2006). Anyway, they weren’t musicians, but the guy they’d bought from was a composer, and had built a studio next to the garage which he used as a control room, walling off half the actual garage space for the actual recording studio space, with a patch bay and slanted window in between. The non-musician subsequent owner took down the walls inside the garage in order to park vehicles in it, and used the control room as a bar for entertaining. I’ve turned it back into a rehearsal space… not very big (12x16 IIRC) but serviceable, and I’ve reversed it by putting the mixing desk and multitrack recorder in the garage itself and using the former control room as the studio. Added several jacks to the patch bay too while reversing them. But my red light is just a red bulb installed into the porch light outside the studio door, which I have discovered is slightly too subtle for my family to notice.

What’s funny (or sad, but I prefer to think it’s funny) is that only now, as I hit 45, do I have the wherewithal to make a little recording/rehearsal space, and have some halfway decent gear. My chops aren’t any better than they were in my 20s, and the opportunities to play are few and far between, especially with work and family obligations… but now I’m finally in a place where I have a place to play and gear that doesn’t sound awful, and practicing is no longer the unrewarding chore it always seemed to be. Now that the kids are old enough to entertain themselves by playing relatively unsupervised with the kids next door, I’ve started trying to dust off the gear and knock out years of musical rust.

I am pretty sure we could work a deal for some time from the folks at the Village Studios in LA if we wanted.

Heh… I have no doubt you’ve got some useful connections we could exploit! If we could get something like this together, it’d be awfully cool. I hasten to confess that I have the barest competence at guitar, am slightly better at bass, and am probably most useful on drums. I have made a practice of finding out where the greatest deficiency lay in every band I’ve joined, and filled that hole the best I could. If we have a good drummer but no bassist, I can thump bass. If we’re spoiled for guitar talent but have nobody to hit the skins, I can do that. If the rhythm section is taken care of but we can use a rhythm guitar, I can do that. If the gig calls for someone to impersonate Malcolm Young or Phil Rudd, I can do either pretty darned well.

But I’ll only sing if @funruly does too.

It’s not how you sing, but what you sing. Ask Bob Dylan, or early Cohen.

Love that farty bass sound! Never liked to do that sound with my own jazz bass but have done it with synth bass from time to time. It doesn’t fit with most of the music I’ve ever made as the lead sound but is fun to layer in as a secondary bass track sometimes.

They removed all the equipment when I bought the house, however but left the insulation

This was a minor hit back in the day.