a Trump supporter who attended the 1/6 insurrection.

(I am lot a lawyer, this is not legal advice but the understanding of a lay person.) The NFT bit is just attention grabbing nonsense. The fact that Ariel Pink is a Trump supporter, although disgraceful, is irrelevant.

If ir was the case that if it could be established that the photograph was taken in a context where Ms Miller had a reasonable expectation of privacy, she may have something. Otherwise, this is nothing.

The fact that Ariel Pink is a Trump supporter, although disgraceful, is irrelevant.

It certainly indicates a strong willingness to embrace grifting her supporters. These tend to be people who think they are above the law, and can do whatever they like and get away with it. So yeah, it does matter that she is a Trump supporter and participated in a coup.

I am lot a lawyer

That’s good because you are incorrect. Did you read the Billboard article? Take a look at the Right of Publicity.

This is untrue in many USA states.

Did you read the Billboard article?

They did not. I did, and this is an interesting way to deal with the violation of Jill Miller’s rights. I doubt Ariel Pink has much money and he’s hopefully going to spend what little he has on his criminal trial for Jan 6. Looks like the company that published the album at issue pulled it from distribution because of Ariel’s insurrectionist tendencies. Good for them. They really should reach out to Jill Miller and try to repair their wrong tho.
As to Jill Miller’s idea- it’s interesting, it’s vicious, and it’s totally legal.

Welp, she did it. A use for both NFTs AND AI art that I can get behind. Rough day for my cultural/moral absolutes y’all.

I was on board until i saw the term NFT

Yeah, I had the same reaction - ‘Ariel Pink?’ Never heard of them - are they someone famous? “Trump Supporter at 1/6”… oh, LOL, obviously not.

I was on board until i saw the term NFT

Yeah, not great, but I have different feelings about artists making money off their work through NFTs than everyone else, I confess. As an artist, you’ve got to find - or make - those opportunities where you can, because there aren’t a lot.

Sure, if i was a working artist i know i would’ve at least thought about it. Can’t hate against an artist trying to make their money, but still gunna hate on NFTs.

A centralized database held by some sort of nonprofit is basically the best of all worlds. Just have the cryptographic ‘ownership’ be confirmed by a secret phrase or a password and you basically have a simple, digital way to confirm ownership without the overhead of the blockchain.

Sure it’s not 100% secure, but neither are NFTs with all the targeted attacks or insecure blockchain implementations.

You’re not missing much. He sounded vaguely familiar so I checked my music library and had a couple of tracks from the early 2000s. He does lo-fi indie rock. Didn’t find it particularly compelling then, and find it less so now.

For some reason, being a Trump supporter is solid indicator of the mediocrity (at best) of an artist…

I had to check the date on this because I had a hard time believing anyone was still releasing NFTs in 2023.

Well besides all that, I hate the fact that his music has been ruined for me due to his stupid shenanigans. It’s really too bad because his songs are well written and catchy. It’s a damn shame.

If only there were some way to instead sell the art digitally, prove ownership, and reduce sending stuff around the globe. NFTs do have a use case.

NFTs are not proof that an individual owns the copyright for any given digital image. Nor does owning an NFT change the way one can enjoy a digital image. These are just common misconceptions popularized by cryptobros trying to justify their own existence.

Looking at an original painting is not the same as looking at a print of a painting, so if you’re an art collector you’d want the original.

Looking at a digital image on a screen is exactly the same experience regardless of whether that image is associated with an NFT. The comparison doesn’t hold up.

I guess what I’m saying is: If you meet the Buddha on the path, kill him.

It is however a way for someone to give money to an artist in return for a “token” that claims they “own” a copy of that artwork.

An NFT is a needlessly wasteful way of doing that though. People sell digital art and resources online all the time; stock imagery, digital music and video files, code snippets and templates, etc. Most of these transactions come with some kind of digital receipt from the creator or owner of the resource being purchased. How does adding NFTs to the mix enhance this process in any way?

I kinda thought BB hated it when central servers went away taking people’s stuff with them, and when you couldn’t sell things you owned because you only licensed them.

Dude, NFTs don’t protect against that because they don’t (typically) contain the intellectual property itself. Most of them are basically just links that point to art stored on a server somewhere. There absolutely are cases where people lost access to some file linked to an NFT because of server issues. 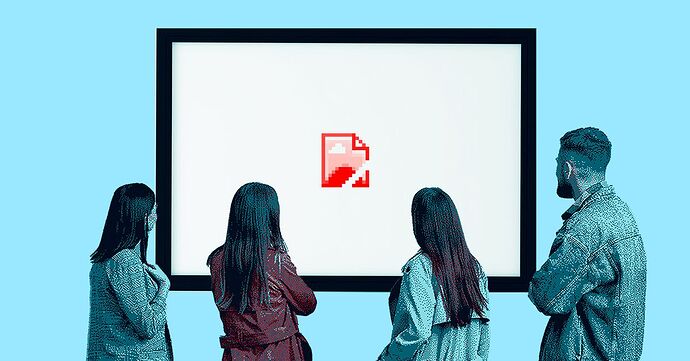 Also, having a clear chain of custody of an NFT doesn’t do anything to address the fact that anyone can create an NFT linked to digital art that they didn’t create and don’t have the rights to. So you can prove that you bought the NFT but that doesn’t necessarily mean anything useful.