She may want to steer clear of Satriale’s, too

edit: @BettyBowers clear it up for us: 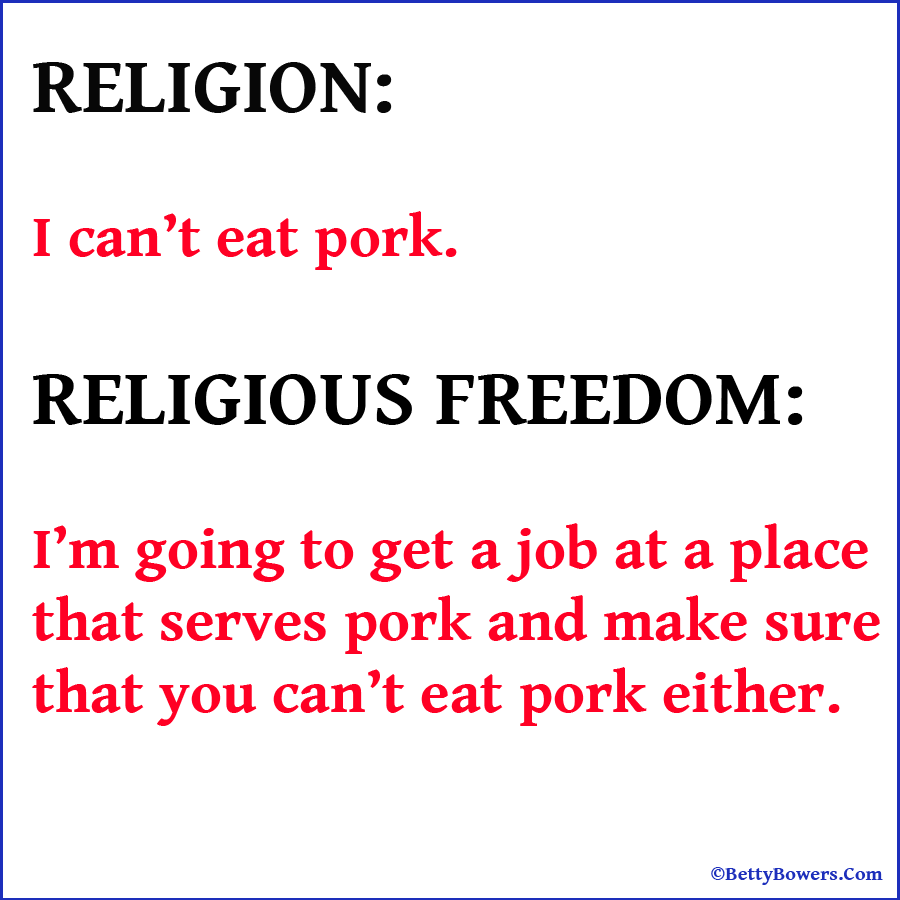 There’s really no middle ground, it seems - either you are cool with this lady getting fired for not doing her job and you’re cool with bible-thumping county clerks getting fired for the same, or you are not cool with either one. If Hobby Lobby doesn’t have to obey the law if it violates a religious sensibility, why should Charee have to obey her work order if it violates her religious sensibility?

Oh boy. Any different than a certain county clerk refusing to “serve” marriage licenses because of her religion? Maybe. Arguably her responsibilities are not primarily or even substantially related to serving alcohol. Also, reasonable accommodations could be made by getting other flight attendants to handle that responsibility (since the drink cart is usually separate from the food or snack carts, or other responsibilities), though obviously that would mean that the airline would have to figure out a way of making those assignments in advance, and making sure there were not multiple muslim flight attendants on the same plane. The counter argument of course would be that she knows that alcohol is served on planes and that is one of the responsibilities of a flight attendant. She wouldn’t apply to be a bartender and expect not to serve alcohol, so some jobs are always going to be unavailable to her because of her religious convictions.

If your religion instructs you to not serve alcohol to others, don’t become a bartender.

I don’t think this is the same as Grimace having to issue driver’s licenses. The flight attendant took that job knowing ahead of time that she would have to serve alcohol. Why take a job that you KNOW will put you in a quandary, because of your religious beliefs? Grimace already had her job and the change in her responsibilities came after.

But it isn’t really a change is it? They aren’t filing a different form, just more of the same form.

I need clarification on people who might be more savvy with the Muslim faith. Does it expressly forbid you from serving alcohol? I was under the impression that drinking was forbidden, not serving it.

The problem is … you can’t just accommodate the mainstream religions. It has to be all religions - and once it’s all religions now you’re in trouble because of some follower of “crazy ass never-heard-of-it-before religion” that calls for its adherents to [ do or not do whatever ]. Now company is bending over backwards for all sorts of oddball reasons - none of which are more or less valid than any of the others.

It’s not even hard to dream up crazy examples because the mainstream ones have enough examples in their extremist populations.

[ Edit for clarity - which might not even be there now - I’m just fed up with people using their religion as reasoning for anything. God couldn’t give a flying fig if you had someone a beer. Sorry. ]

Note, the flight attendant converted to Islam a two years ago, after becoming an attendant, and only this year “learned her faith prohibits her from not only consuming alcohol but serving it, too.”

They accommodated her for two months and then a coworker filed a complaint about her not doing her job and “the employee complaint also said Stanley had a book with “foreign writings” and wore a headdress.”

Of course the other employee can be bigoted while also being right about her coworker failing to perform a core aspect of her job.

I need clarification on people who might be more savvy with the Muslim faith. Does it expressly forbid you from serving alcohol? I was under the impression that drinking was forbidden, not serving it.

I see this quoted as meaning anybody engaged in serving/making/buying/etc alcohol is damned.

One should not even sit at a table where folks are consuming alcohol, which makes things difficult for business transactions... (I think that there is a "legal necessity" clause that gives them an out)

Edit: Here are a couple of interpretations:
Working in a Restaurant that Serves Haram Food and Drinks - Earning livelihood - counsels - OnIslam.net
Is Serving Alcohol and the Income gained Haram? - IslamQA

I would say; read the job description before you take on a job, and if it conflicts with any of your fundamental beliefs, then it’s probably not the job for you.
And if your beliefs come after the job, well then you’re going to have to pick one of them.

Personally, I’d want to hear from a Jahova’s Witness who is also a surgeon before I pass judgement.

I would say; read the job description before you take on a job, and if it conflicts with any of your fundamental beliefs, then it’s probably not the job for you.And if your beliefs come after the job, well then you’re going to have to pick one of them.

I dunno…Why would “If you don’t like it, leave” apply to Charee’s job but not Hobby Lobby’s business practices? If they don’t like the laws of the area you’re doing business in, why can you ignore the laws instead of just leaving?

One problem I could see from the airlines point of view would be if they have so many people with this exception that it’s now hard logistically to ensure that every flight has someone who can serve booze.

A grocery store by me sells alcohol AND employs kids under 18. Any time one of these kids rings up someone with alcohol they scan everything but that – entire order – then call a legal adult over to scan the alcohol and close out the sale. I imagine someone who thinks their religion doesn’t let them sell alcohol would be accommodated. All of it sounds like a hassle but they are making it work.

A flight attendant is not bartender…

Does it expressly forbid you from serving alcohol? I was under the impression that drinking was forbidden, not serving it.

I’d suspect there are different interpretations on that, and it depends on where one lives. I’d suspect in places like the Balkans or East Africa, where you get a good mix of religions, and Islam isn’t the state religion, you get more lax Muslims on such things. I have a friend from Kuwait who I’d doubt would ever drink or serve alcohol, though I known other Muslims who do drink.

Most Muslims I know wouldn’t have a problem with this, similarly with Christians I know, they don’t stick to the absolute letter of the religious text especially when it comes to others not of that faith. Pretty much take a live and let live approach. Will serve alcohol, pork etc just not consume themselves and don’t pass judgement on those that do. I think this is a case of someone pushing things to extremes because of their personal beliefs that are more fundamentalist not because she’s showing the way of things of how all Muslims act and interact with other people daily. It’s just not realistic to make every single job flexible enough to allow for every religious belief.

Just waiting for the pastafarians to now demand pirate uniforms for work.

A flight attendant is a bartender, among other things that include cattle-herder, safety instructor, and - on Southwest - terrible amateur comedian.

Note, only one of these adds additional revenue while in flight. I can assure you that the company’s bottom line is greatly influenced by selling single-serving shots of Baccardi for $8. Also note that some planes - particularly on smaller carriers, like the one in question - are equipped with only one or two attendants.

f “crazy ass never-heard-of-it-before religion” that calls for its adherents to [ do or not do whatever ].

I believe the example you were looking for was a Pastafarian who refuses to serve gluten free food.