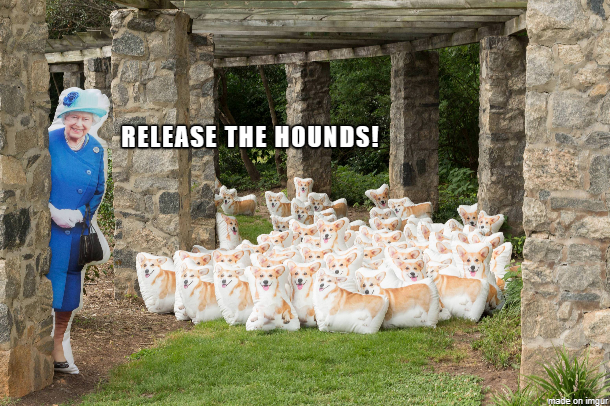 Who’s bright idea was it to breed a dog with stubs for legs?

Is that Cheerios with or without the Roundup?

without the Pip Pip. It is a Corgi.

Who’s bright idea was it to breed a dog with stubs for legs?

That’s just how you get from Point A to Point B if you want a bouncy bubble butt like that.

Especially breeding such a dog to herd large lifestock animals. If they couldn’t breed longer legs into the dogs, they certainly managed the bossy noodgeyness needed for the job.

What’s the ETCC (Estimated Time to Complaining about Corgis), @jlw?

I believe one theory is that corgis are related to a now-defunct breed created for running on a hamster wheel rigged to turn meat roasting on a spit (and/or act as a foot warmer during church on days off), so the compact size and tiny legs were a designed advantage.

They’re cuteness over rides their impracticality. That’s my theory.

Years ago, when I was living in rural Yorkshire, I saw a demonstration of herding cows using a corgi.

It wouldn’t have been as effective without the short legs. Or the attitude.

My parents were breeders of Pembroke Welsh Corgis for 30+ years (short or notails are Pembrokes and long tails are Cardigans or so it was back when they still docked tails).
First off Maxine is a “fluff” in breed standards that is a big fault because they lack the waterproof guard coat that protects them from rain and snow. That being said the first Corgi my folks got turned out to be a fluff named Penny. She was a whiz at obedience but would be laughed out of the conformance show ring. She went with me when I moved out to my own house and she was my best pal. I miss her even after all those years. She actually seemed to have a smile on her face. People who forgot her name said she was the dog that smiles.
As to the short legs, that was bred specifically for herding cattle. The corgi would runup and nip at the cattle’s heels and then flatten on the ground so a kick misses them. My folks sold a couple of dogs to a cattle rancher in South Dakota. They sent videos of the dogs herding cattle and it was astounding to watch. They didn’t have to teach them anything it was inherent in the breed to herd. These are wonderful dogs for a family or a single person. Being a working dog they are tuned to respond to their owners and work with you. They seem to love training either obedience or even for the show ring and are happiest being with their people. They do shed like crazy when they change coats but a roomba would solve most of that. They are well worth some dog hair on the rug.

Genetic testing has shown both corgis to be most closely related to Shelties.

Is some have mentioned, they are herders and the shortness is an advantage because they aren’t the kind of herders like the border Collies we are used to seeing herd. They are drivers. So you would have a herd that needs to be moved from one pasture to another down a little lane. These guys just bark, nip at legs, and generally throw attitude until the livestock moves down the way to the pasture. Because they were getting up close and personal being short kept them out of the way of an annoyed kick. On top of that, they are general farm dogs. So ratting and vermin control are ingrained behaviors and they can get into tighter spots chasing rats with short legs. I have a female Cardigan that is a cold blooded killer when it comes to rats. The Cardigans came first and they were breed for cattle. Once cattle gave way to sheep in Wales, the Cardigans were breed down to the Pembroke size because the Cardis were too rough on the sheep.

I had to see some video, and found this clip that has sound issues, but you can see a border collie and a corgi working together herding cattle, using their different styles, with the same intensity (shame the sound is bad, because from other clips it seems that the corgi’s bark is part of their herding skills somehow, they’re very vocal):

They are super vocal and yes it is definitely part of their style. That’s a fun video and it shows how they may be adorable fluffs but when you get down to it they are tough as nails working dogs.

I will caution people that are considering corgis because they are super cute. They aren’t casual dogs. They are working dogs and they need a job. If you don’t give them one they will make one up. They are very vocal, smart, and willful. They will train you if you are not careful. If it is going to be your first dog, give it a pass.
That said, they are amazing dogs. They had better be for the effort.

How about a language warning next time?