My failed attempt to draw the Nancy comic strip

Another cartoonist’s rather more intentional failure to draw the Nancy comic strip: http://www.howardcruse.com/comicsvault/nancies/

Is the first image a failed attempt by Brunetti?

The rest are by Bushmiller, but this piece is all about Brunetti’s failure to draw the strip well. It’d be great to see some of his failures along with these works by the master.

“Nancy” was one of the first comics I read. Because at a young age, kindergarten or so, it was the only strip I could read.
The habit stayed with me for years. Even after I determined it wasn’t funny. And maybe had never been funny.
Later in adolescence, I had a conversation with a friend about why, since we thought it was awful and useless it was still published.
My friend had the idea that it served a purpose. The entire strip was secret code to government agents. There, in plain sight, served up every day and available everywhere, were the marching orders of a dark army.
Now, looking at it after not seeing it for many years, I know he was right.

No, the “funny papers” were never funny, but they were “for kids,” the only part of the grey newspaper that was meant for me. I read them intensely, as if they were scripture.

Reminds me a bit of what someone said about Kurt Vonnegut, Jr.'s writing style: it seemed absurdly simple, until you tried to successfully imitate it.

The Greatest Nancy Panel Ever Drawn

Radiograph? Surely you must mean rapidograph. Must be the autocorrect on your Mac.

Can you draw Nancy? boing

I think this is more or less what the original looked like: [image]

and then there’s this:

The essay is from a book collecting real Nancys, so it makes some sense that it would be illustrated with real Nancys. Still, it would have been nice to see the imitations. 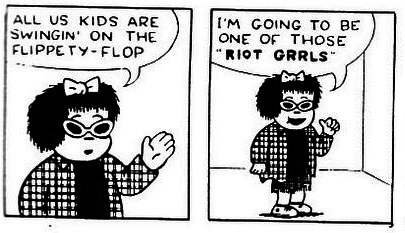 Yes, this rather embarrassing typographical error was introduced by the autocorrect function, and I neglected to catch it. Unfortunately, no one at Fantagraphics managed to catch it, either, and so the book went to press with “radiograph” instead of “rapidograph.” Well, consider this post my clarification and apology to the world. Perhaps someone at BoingBoing can correct it?
Sincerely,
Ivan Brunetti

Even though the art is a little shaky, I vastly prefer this to the work of the guy who did take over the strip. This is a typical Guy Gilchrist Nancy. Lotta unfunny eulogizing of dead musicians, plus the occasional rah-rah patriotic/religious screed. Bushmiller could do patriotism and religion, too, but even then he would usually remember to TELL A JOKE.

That’s a typical Gilchrist Aunt Fritzi. The strip has a split personality these days, it seems. The ones featuring Nancy & Sluggo are more old school, the Fritzi ones are… I dunno what those are supposed to be, that mawkish inspirational bullshit that a lot of syndicated cartoonists seem to be fond of.

It was Jerry Scott who really showed zero understanding of what Nancy was about, for twelve years. I mean look at some of these. It’s not that they’re bad per se, but they. Are. Not. Nancy.

His predecessor Al Plastino, on the other hand, had a consummate grasp of the strip, but the suits insisted on Poochifying it, so he didn’t last long.

Look under the section that reads "[Here are six of Brunetti’s Nancy comics:] "

Why would you even try? Godd godamighty I hated that strip! And it is almost impossible to break yourself of reading since you can read it in a single glance. Took me years to learn how to avert my gaze.

Ah, thanks, those have been added to the post!

The difference really is noticeable. Subtle, but there.