My Magic Kit at Quarterly.co

The false thumb is one of my favorite gags right along with the Harry Anderson version of the needle through the arm.

False thumbs are great. “The Harry Anderson version of the needle through the arm” I don’t know that one. I will check it out. Thanks!

Yep. With a thumb tip, invisible deck and three pieces of rope, you’ll never be hungry in any city in the world. (And the coloring book kills at birthday parties.)

Harry Anderson wrote one of the best books I have ever read on cards, conmen, carnivals etc… 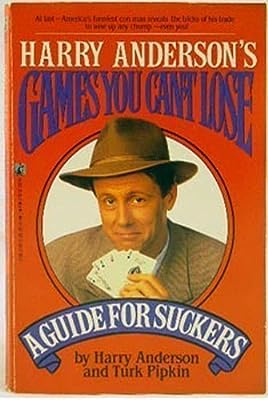 Reading that book as a 14 year old set me up well in life.

He has some of the best patter in the business. I kind of feel like his acting career derailed him from becoming as well known a magician as he should have been.

It may just be a kit branded with his name.

Yes, Mystic Smoke! I remember reading about “Smoke for Finger Tips” in first grade in a Johnson Smith catalog. When I finally found a store that had a rack of Adams magic items and novelties I grabbed it. Not necessarily a trick, but cool effect.

After joining a local magic club the coloring book became on of the first items I acquired at the magic/costume shop in our town and yes, it is a must for kids b-day parties as well as David Ginn’s patter for the linking rings.

Haven’t really dug in my magic stuff in years, every once and a while I’ll dig it out.