TV Magic Cards with Marshall Brodien - the best commercial ever

I had them, and I agree, super fun!

Ain’t that a standard Svengali deck?

(Heh, this is probably exactly the kind of comment that magician guy with the silly business card would hate, right?)

“Look! They’re ALL the Ace of Spades!”

I remember that ad so well!

I remember that ad. I actually bought a competing deck with a different commercial. It was a marked and stripped deck. The marking used a clockwork pattern in the 4 corners. I can’t remember the name, but it was something similar.

I remember the commercial and I had the cards. Fun memories.

I did have a stripper deck (still do, I think), as well as a cheesy magic kit along these lines: 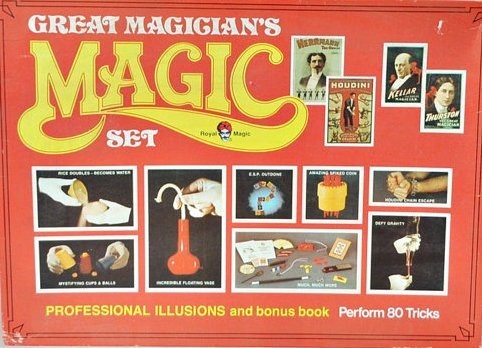 Neither amounted to much in my hands. All the gear in the world won’t help if you just don’t have the moves and the patter.

How do they work?

I had that intuition and never even tried to learn tricks.

Man, why are magic sets so cheesy? I mean, there are probably bespoke ones out there, but the ones they sell to kids are just so low-rent looking. My brother got one that was even lamer than the one you posted the picture above. I remember it had copy on the box to the effect of “Learning magic encourages self-esteem and poise,” which made it sound like therapy for dorky kids, and thus even more of a turn-off.

Yeah, I’ll admit it, I totally had that set.

Here is my routine with the deck:

Watch out, you’re going to make those guys on the magic forum really cranky…