"Nepo Baby" calls out nepotism in Hollywood, with mixed reactions

There are lots of people in Hollywood who had parents in the industry, but the ones to get really successful are almost to a person quite good at what they do.

The entertainment industry is not that different from any other industry. If your father was a carpenter odds are a lot higher that you will grow up to be a carpenter too, not due to nepotism so much as example.

If you want to see an industry filled with people who become wildly rich and successful despite a total lack of talent just look at the biggest players in finance and real estate.

Meh.
Both the Barrymore and the Huston family have at least 3-4 generations in Hollywood.

I think both things can be very true! They may actually be talented at acting but so are lots of other people who don’t get to make a huge career out of it. The skillset is maybe not so rare.

Maya Hawke has been amazing in everything she’s done.

I kindof of assume the less visible nepotism on the business side of things is more problematic.

They may actually be talented at acting but so are lots of other people who don’t get to make a huge career out of it.

I’m sure that’s true also, but the opportunities afforded to children of Hollywood insiders aren’t always due to nepotism as we usually understand it so much as the fact that a parent who has “made it” in the industry probably has all kinds of useful insight about which acting classes to attend, how to book auditions, etc.

My family happens to have a lot of doctors and engineers. I don’t think that’s because our family is genetically predisposed to those career paths or because there is an unusual amount of nepotism in those industries, but it never hurts to have mentors and role models at hand to help show the way.

If I were an aspiring actor I guess I might care about this. Not sure nepotism in the movie industry is any worse than children of generous donors getting preference in admissions to Ivy League schools.

Maybe we need to be more open minded about what is attractive?

Agreed. If you look at movies from the 30s, the stars don’t look anything like they do today. Obviously tastes change, but tastes are also formed by the movies.

Doesn’t that still smack of privilege though? The right schools and knowing the casting folks is a huge leg up, and arguably bigger than it would be in a field like engineering. There, at least, you still need to go to school and get good grades, and if you aren’t competent you won’t last long (or, er, get promoted?)

That isn’t to say that the offspring of famous actors are talentless hacks, far from it. There are other forms of nepotism that go beyond kinship (e.g. directors/producers always working with the same actors). Nepotism is really just a specific type of privilege.

I expect the real nepotism on the talent side would be along the lines of people you haven’t heard of who keep getting bit parts because a parent is a powerful agent. Louise Linton, wife of Steve Mnuchin, springs to mind as an example - I suspect she only got to write, direct and star in Me You Madness because of her husband.

It has to be at least as much attributable to the fact that these kids get to keep trying longer. Dakota Johnson had the resources so she didn’t have to decide how long she was going to wait tables before she called it quits.

Colin Hanks, as I understand, tried to do some acting (and he was in a few things) but switched to more behind the scenes stuff. No one is going to give Colin Hanks more than a couple of roles just because his old man is really talented.

Doesn’t that still smack of privilege though?

Colin Hanks, as I understand, tried to do some acting (and he was in a few things) but switched to more behind the scenes stuff.

He’s still acting. Perhaps you’re thinking of somebody else. 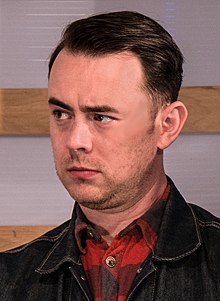 Nepotism exists in all fields. It’s just more visible in acting families and/or politicians (which are another type of acting family).

I might liken it to getting into college. Having parents who went to college and so know the rules, expectations and how to work the system will give you a leg up, but that’s not the same as being a legacy admission.

He was good in the first season of Fargo.
Loved that series.

As to the original topic - Surprise! The progeny of actors sometimes wind up being in showbiz…

It’s not the same at all. Anyone can apply to go to college (though in the US many can’t afford it) but not everyone can get anywhere near a top Hollywood agent. There is also marketing value in a person with famous parents.

Theatres all over the world are full of talented actors who you’ve never heard of. Some of these people would have been among them if they didn’t have the contacts.

The entertainment industry works on the concept of bankability like any other business. This means that it’s going to go with known quantities, including giving the kids of people they already know special access to job opportunities that others might never receive. It also means that if they don’t have the talent and work ethic to perform they’ll only go so far.

We tend to notice the “nepo babies” who keep getting work despite their obvious lack of talent, but most of those who get their foot in the door due to family connections and who choose to stay tend to chug along without making big waves.

If you want to see an industry filled with people who become wildly rich and successful despite a total lack of talent just look at the biggest players in finance and real estate.

This is an aspect of the larger problem in the U.S.: the shrinking opportunities for those who don’t win the genetic lottery. There have been small steps made to address it, like some states making unpaid internships illegal, but generational transfers of privilege are still increasingly being locked in – not only in terms of financial capital but also social capital.