Are we really so interested in Renée Zellweger's "new face"?

Would we have this sort of discussion about a guy?

Photographs of actress Renée Zellweger at the Elle magazine's Women in Hollywood awards this week, showing her dramatically different appearance, have sparked the Internet's interest. Here's the science behind why she looks so different.

Yes. Maybe not to such detail, and they are less common (so far), but yes. A brief generic search found this. 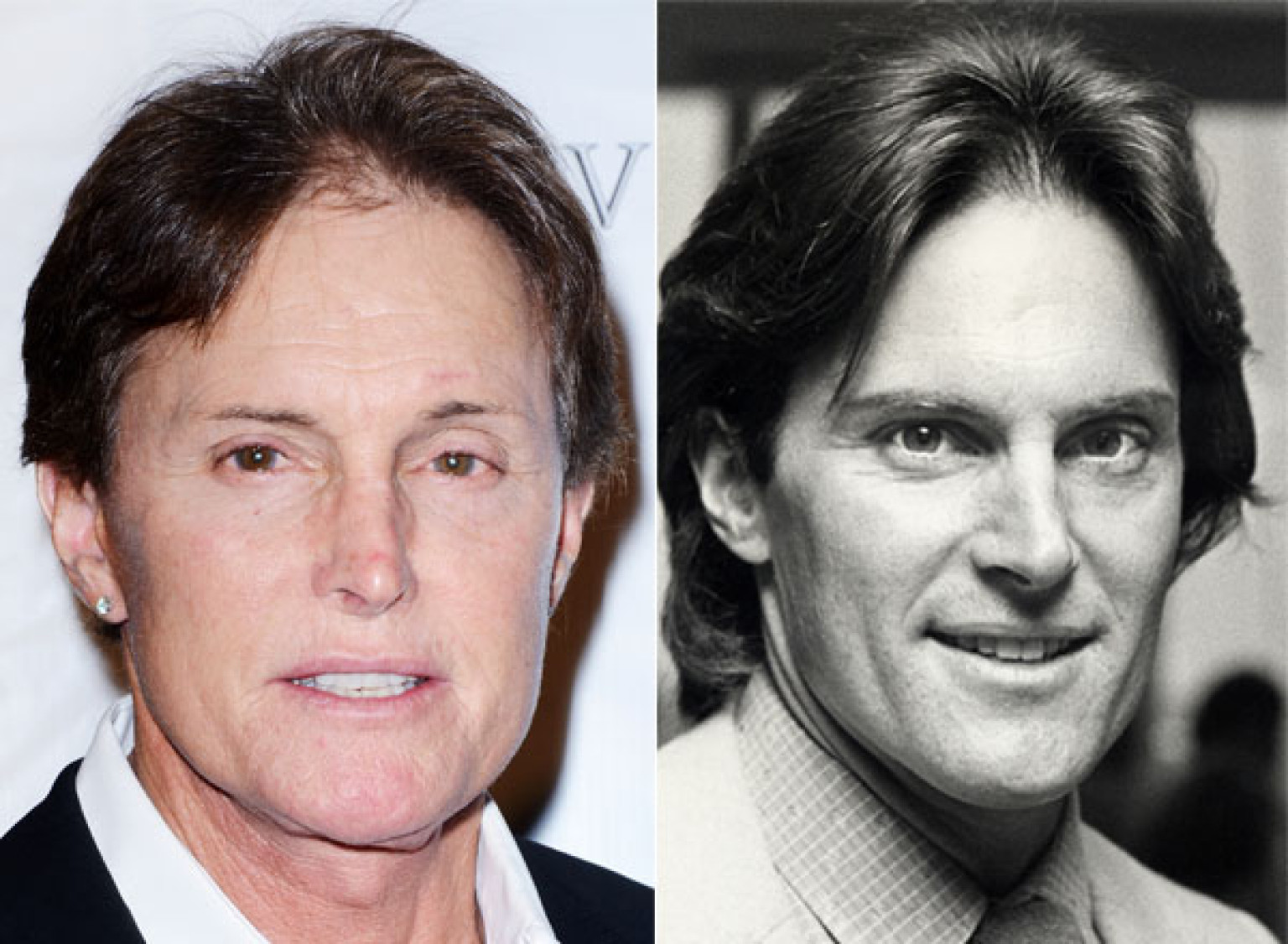 These Guys Have Had Some Work Done... And Admit To It

Getting a nip here and a tuck there has become as regular as going to the dentist in the wonderful world of Hollywood. But it's not all boob jobs and but...

Also, something for the fray.

6 Plastic Surgeries for Men That Prove Humanity Is Doomed

You just don't see men getting breast implants, and there are not yet reliable ways to do penis enlargements. But the industry is catching up, unfortunately.

Do you honestly think this is the same amount of scrutiny women get? I think there is a shift where men are getting more physical scrutiny than they have and the past (and it utterly sucks, too), but do you think it really is anywhere near the level as for women? Have you been in a grocery store lately…?

Not at the same level in general, but Bruce Jenner sure seems to get constant comments and jokes.

You asked for sort of discussion, I provided. Admittedly there are fewer such cases in the male field, and partially of a different kind (see the cracked.com link), but they are there neverthless.

Grocery store? What for?

You asked for sort of discussion, I provided.

Fair enough… but my point was that there is basically an entire industry dedicated to pointing out that women age and how terrible that is. I meant grocery store because of the tabloids…

Bruce Jenner sure seems to get constant comments and joke

At least some of that is related to his association with the Kardashian brand, I’d imagine… I’m sure some see him “falling” so far from his former glory of manhood, being an olympic athelete… now he’s just known for being married to a woman, so I’m sure most of the animus directed at him is related to that. You “act like a woman” (such as get plastic surgery because you’re worrked about your looks", you get dumped on.

Isn’t part of the problem that when men “care about their looks” they are “acting like women” not men?

To be honest, I wasn’t all that interested in her old face. Although, like Quasimodo, her name rings a bell, I still wouldn’t be able to pick her out of a line-up or notice if she was in the queue in front of me.

Would we have this sort of discussion about a guy?

Plastic surgery always seems to me to be, well, dull and unimaginative. I’m 100% in favour of anyone changing appearances, even if only for shits and giggles but this whole anodyne “lift, nip, tuck” stuff just reminds me of Glyph from Halo Jones. With a whole choice of enhancements and modifications, they always seems to go for the blandest thing on the menu.

Give me a face with character, one that shows a life fully lived any day. Male, female or any point in between.

Fair enough… but my point was that there is basically an entire industry dedicated to pointing out that women age and how terrible that is. I meant grocery store because of the tabloids…

Ahh. These rags. I ignore them with extreme prejudice. Nothing interesting in the print and the glossy-ish paper is not even usable as a sorbent.

As of cosmetic surgery, I find more interesting the how (or, where to cut and how to sew) than who decided to get one.

Give me a face with character, one that shows a life fully lived any day. Male, female or any point in between.

Give me a head with a good brain inside and who cares about what’s on the outside.

@shaddack at grocery store: ‘Who has sawn up all this useful ducting into 5" lengths, and why have they stuffed beans in it? Also, there appear to be eggs in this soundproofing material.’

I don’t have a lot of kind thoughts for the elective cosmetic surgery industry. (as opposed to reconstructive or repairative plastic surgeries).

I’m not interested in her new face, but I am sad that she was apparently so unhappy with how she looked that she changed it.

What bothers me about cosmetic surgery is that people aren’t very creative about it. If you could look like anything, why choose some stereotyped ideal that looks familiar to people? It seems more interesting to me as a form of real body modification. Being able to design your own face could be a tremendously empowering thing, but instead of individualism all we get is homogeny.

FWIW I think the same thing about gender. Why not sculpt a new “gender” instead of picking one off the shelf?

This week, the internet became a firestorm of controversy. No, not over America’s new war in the Middle East or NASA’s historic photos of a comet brushing right up against Mars. It was all about one gracefully aging starlet’s surprising new look.

Huh. I’m glad you asked about this. I saw some great coverage of this as a stupid thing the other day by, of all people, Russel Brand.

Russell Brand is a pretty smart cookie, actually. I’m not surprised he talked about this.

Sure, I’m not saying that YOU specifically care and want to pick apart women’s physical attributes, rather that our culture does this and that those magazines are an example of that… Even if we aren’t buying them someone is… honestly, I wish they’d bring back Weekly World News… we need to see how old Bat Boy looks!

I think the question is WHY people make the choices they do, not why don’t they make “better” decisions. It’s common among women (and some men) who are in fields that are focused on image for a reason… their opportunities for roles (in hollywood films) tend to dry up at a certain age. It becomes harder to make a living and the kind of roles they get tends to shift as well. In general, hollywood films tend to underserve women (though it’s getting better, I think).

The problem is though, that the “movie industry” is far less image focused than other visual media. Most movies are not principally “stories told through pictures”, but basically just plays. Where one might suppose they would select people for dramatic skills. If Hollywood films can be seen as a hybrid of photography and theater, I really think they tend to take from the worst of both.

And, in any case, everybody has “an image”. So I am not clear how this is any sort of explanation. Most movies don’t even come from Hollywood, so it is unfortunate that they seem to command everybody’s mindshare. If they want to be a visual medium, they should lose the theater/melodrama aspects. If they prefer to pursue those instead, they should select people based upon their acting.

In general, hollywood films tend to underserve women (though it’s getting better, I think).

I’d like to think so, but I can’t tell. On the one hand, audience’s love for youth seems as powerful as ever. On the other hand, we spend more time than ever talking publicly about these sorts of issues, indicating there’s widespread dissatisfaction with the fact that so very many actors and actresses seem to fit the CW ideal, irrespective of whether that actually fits their character as written, let alone characters that reflect real (or relatable) people and situations. Couple this with the fact that the aging Baby Boomer audience still hasn’t given up all its hold on the zeitgeist (it’s turning into a deathgrip, ha ha), and the studios know that there’s a real audience for older actors.

The stereotype of the plastic surgery patient being an aging actress has saddened me for as long as I’ve known about it. There’s a temptation to indulge in some victim blaming if we figure “they knew the job was dangerous when they took it,” that they were well-paid during their ingenue years, that they should realize when those halcyon years are behind them and gracefully transition to more matronly roles rather than trying to stay forever youthful, but as you say, their opportunities for roles do tend to dry up, not just change. And the environment around them is toxic; the pressure is relentlessly unreasonable. My first actress girlfriend actually had a facelift at twenty-one. That, my friends, is nuts. But that pressure was all around her, sometimes covert, sometimes overt, and then to the point where it became imaginary, and yet constantly felt.

I’m gonna check something real quick. There have been 87 Best Actress Oscars awarded. 23 of those went to actresses 40 or over at the time of the ceremony. Of the 87 Best Actor awards, 56 went to actors 40 or older. And this isn’t an award meant for whoever was the most glamour-puss gorgeous that year or whoever landed the most magazine covers; it’s meant for who turned in the best acting performance. It makes sense that it would usually go to the more seasoned actors with decades of experience under the belts, and indeed that’s usually the case for the men.

And never mind the age, let’s just take a peek at looks. Going backwards from this year, we have Cate Blanchett, Jennifer Lawrence, Meryl Streep, Natalie Portman, Sandra Bullock, Kate Winslet, Marion Cotillard, Helen Mirren, Reese Witherspoon, Hilary Swank, Charlize Theron, Nicole Kidman, Halle Berry, Julia Roberts, Hilary Swank again, Gwyneth Paltrow, Helen Hunt… heck you have to go all the way back to Frances McDormand in 1997 (and before her, Kathy Bates in 1991) to find a Best Actress who didn’t coincidentally happen to be drop-dead gorgeous. You won’t find such overwhelming beauty among the men. Instead you’ll find a sixty-year-old Jeff Bridges, a 55-year-old and 50-year-old pair of Daniel Day-Lewises, a Geoffrey Rush, a Jack Nicholson, a Kevin Spacey, a Roberto Benigni, a couple of middle-aged Sean Penns, and a Philip Seymour Hoffman. Oh, sure, you have a Colin Firth and a Denzel Washington, a Jamie Foxx and an Adrien Brody if you go in for that sort of thing… but for the most part, good looks (specifically youthful good looks) aren’t a requirement for male actors (even “of a certain age”) to find work.

Are we really gonna pretend that the actresses in their twenties and thirties somehow lose their talent and stop being Oscar-worthy after forty? Nope… they just don’t get as much work anymore. The guys don’t have that age ceiling, but unless they’re named Meryl Streep, Helen Mirren, Cate Blanchett, Susan Sarandon, Kathy Bates, Maggie Smith, or Judi Dench, by god the actresses sure do.

I think the question is WHY people make the choices they do,

Sure, WHY is a really interesting question, but I’ve found that sometimes knowing Why something happens doesn’t necessarily help you in fixing it.
The question I find most helpful is WHAT.

That’s easy: What these people sell is others people’s fame. They’re doing it cause there’s money in it.

And what do ordinary people get out of watching this spectacle? They get to be told what to think and whats important and what to buy next.
Skinny models don’t tell women that’s how they should look, they tell women what men want! (It doesn’t matter if its not true, that’s what they get told anyway). the same way that Cosmo doesn’t tell women to buy Prada, it tells men what women want.
And that’s how we wind up understanding each other, men as sexist pigs and women as obsessed with looks.