Cool! Trompe-l’oeil pedestrian obstacles! You English have all the fun.

Honestly, they have a point. I can see that being a hazard to older people and those with sight issues. 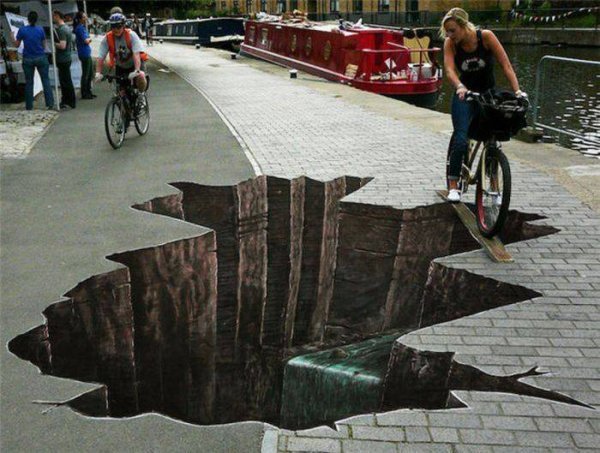 I fell off a similar “optical illusion” kerb in Notting Hill. Went to the ground hard. Spilled my coffee, too. A local sympathised with me and said that it happened “all the time”. The visual edge of the sidewalk (footpath) does not correspond with the physical edge. You need to be paying attention.

This is pretty dumb… and the solution will probably be equally as dumb; ie painting the upper bit yellow instead of the lower bit black.

For some reason they seem to trial a lot of new road layouts/signage/equipment etc. in Cheltenham. Apparently it was one of the first places in the country to get a mini-roundabout, and scattered around the town there’s various new ideas which didn’t pan out, but are still in place in Cheltenham. Learning to drive there was a bit of a chore.

Also, I’m disappointed that no one has come up with a conspiracy theory involving GCHQ yet. How do we know it wasn’t the MIND CONTROL BEAMS that cause the lady to fall off the curb eh? eh?

It won’t be yellow (or red), it would hide markings telling people where they can’t park. I expect the solution will be dumb though.

Also, I’m disappointed that no one has come up with a conspiracy theory involving GCHQ ye

No need. GCHQ is the reason they test things there first, because the constant surveillance of people in Cheltenham means information gathering is easy.
In the same way Harrogate is popular for political conferences etc. because of the enhanced surveillance due to the proximity of the “RAF” (CIA) base, making it more politico-safety-friendly.
Tinfoil hat or inside knowledge? You decide.

Is curb/kerb a lost cause then? If so, I’m going to spell one of 'em qurb - and I’m not saying which. Ner.

kerb | Origin and meaning of kerb by Online Etymology Dictionary

The online etymology dictionary is the internet's go-to source for quick and reliable accounts of the origin and history of English words, phrases, and idioms. It is professional enough to satisfy academic standards, but accessible enough to be used...

Given that BB is a US site I guess curb wins

Using US spellings was part of the oath of allegiance @beschizza had to swear.

What’s peculiar is that before the Brewery development* that this re-modelling of the road is part of, is that that part of the street was pedestrianised, with bricks raised to the level of the pavement (sidewalk, to you colonial types). I’m not too clear on whether that part of the street is still meant to be pedestrianised or not. If it is, I don’t see the point of lowering the road again. Unless this is temporary until the development is finished, so the builders don’t muck up the bricks with their heavy machinery while they knock down Tesco’s and replace it.

I suppose, living in the town, I should know more about this, but I’ve been kind of ignoring the outside world for a while.

*Not actually a brewery anymore.

A trip to the hospital is a good day for you? Your life must be horrendous.

the road surface probably gets more wear and tear than the kerb; and, road paint can wear pretty quick.

if expense were no issue, looking at how old that road is, i’d vote to repave the road to the edge.

In the same way Harrogate is popular for political conferences etc. because of the enhanced surveillance due to the proximity of the “RAF” (CIA) base, making it more politico-safety-friendly.

I’ve long suspected that all the pensioners that frequent Betty’s are retired MI5 agents.

Dude…anyone who trips on the curb should be at least threatened with an ASBO.

US spellings was part of the oath of allegiance