Operation Legacy was a British Colonial Office (later Foreign Office) programme to destroy or hide files, to prevent them being inherited by its ex-colonies. It ran from the 1950s until the 1970s, when the decolonisation of the British Empire was at its height. MI5 or Special Branch agents vetted all secret documents in the colonial administrations to find those that could embarrass the British government—for instance by showing racial or religious bias. They identified 8,800 files to conceal fr...

It’s unfair to call the British Empire racist. They were just as happy to torture and murder white Irish or Boers as brown Bengalis or Black Kenyans /s

Wouldn’t it have been easier just to burn the colonial office to the ground?

They were purging archives in the colonies.

MI5 or Special Branch agents vetted all secret documents in the colonial administrations to find those that could embarrass the British government—for instance by showing racial or religious bias. They identified 8,800 files to conceal from at least 23 countries and territories in the 1950s and 1960s, and destroyed them or sent them to the United Kingdom. Precise instructions were given for methods to be used for destruction, including burning and dumping at sea. Some of the files detailed As de...

The Foreign and Commonwealth Office Migrated Archives are a collection of about 20,000 files and other records created by the governments of 37 British colonial dependencies, removed to the UK at independence, and held clandestinely for decades in various repositories in and around London. They came only from territories administered by the Colonial Office, so not from India and other dependencies administered by the India Office and its predecessors whose records are in the India Office Record...

Precise instructions were given for methods to be used for destruction, including burning and dumping at sea.

Burial at sea; for when you absolutely, positively don’t want your dirty laundry to ever again see the light of day.

Wouldn’t it have been easier just to burn the colonial office to the ground?

[Melchett voice]
Oh NO! When they finally achieve home rule, having to do it from the former colonial office is a symbolic chef’s kiss!

It’s a constant reminder, and gives them the feeling that the colonial government has just stepped out and could be back at any moment, so they’d jolly well better not get out of line. Keeps them in their place at no cost.
[/Melchett voice]

The Colonial Office was in London. 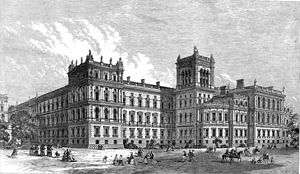 The Colonial Office was a government department of the Kingdom of Great Britain and later of the United Kingdom, first created to deal with the colonial affairs of British North America but required also to oversee the increasing number of colonies of the British Empire. Despite its name, the Colonial Office was never responsible for all Britain's Imperial territories; for example, protectorates fell under the purview of the Foreign Office, and British India was ruled by the East India Company...

Ah, that Colonial Office. I was thinking of the chief British center of government in the country itself.

Looks like the video has been taken down, I just get the message its unaviaible on youtube, or the Az web site.