A page right out of history.

Something tells me the city would not, under any circumstance short of a court order, issue the “correct” permits for the landscaping Ms. Fang wanted.

So, nobody wanted to buy it and then after two price drops it finally sold. Then the proud and visionary new owner renovates the property, makes it better, bigger, stronger and people are complaining? Would they still be complaining if the property just sat there abandoned and rotting?

Some people hate fun i suppose

I’m only really bothered by the grass.

Y’know, for a country that pretends to be all about freedom, the US is definitely full of small-minded fuckers who want to force other people to do things their way.

I didn’t know what an HOA was before I lived there for a couple of years and it’s the most horrifying suburban misery that could be designed. You can be fined, by your neighbours, for forgetting to mow your lawn, or painting your house green, or letting your dogs play outside in the summer?

Right? I kind of want to meet this lady. I mean if you’ve got that much money to blow and don’t mind blowing it… why not make art? And IMO this is a legitimate, absurd, and wonderful work of art.

My main objection is that for a building everyone calls “the Flintstone House” it’s clearly much more reminiscent of the architecture on Tatooine. The Flintstones had a slab roof, not domes! They were a modern(ist) stone-age family.

Maybe she should have went for banthas and dewbacks instead of dinosaurs. 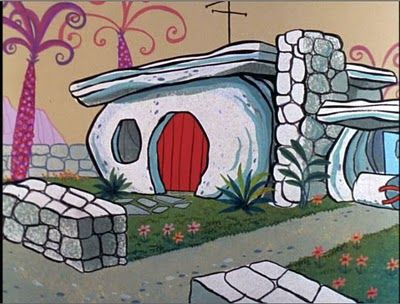 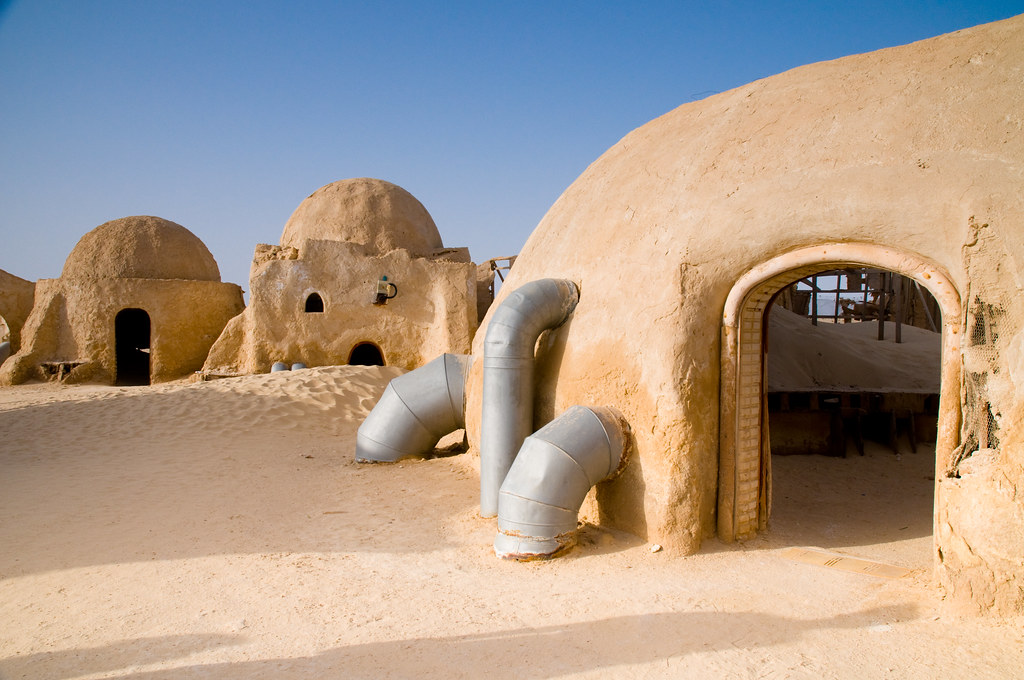 Shouldn’t homescaping be protected under “free speech” or something? Like If I want to make my front yard an statement (be it keeping a perfectly manicured lawn, installing dinousaurs or transforming it into a succulent garden), as long as I’m not affecting (like, affecting the health and or safety, not the taste) my neighbours should I be able to do what I want?

I will never understand you americans XD

Some recent photos of the inside here. Note that the owner is not living in the house.

Florence Fang, former publisher of the San Francisco Examiner and chairwoman for the Independent Newspaper Group, bought the house for $2.8 million in 2017.

In lieu of using it as a primary residence, Fang turned the home into an entertaining space that lives up to its nickname, adorning the exterior with a series of whimsical yet arguably gaudy accents: Tyrannosaurus rex and brontosaurus statues stand next to aliens and their UFO. Fred Flintstone can be found flanking the entryway, with his catchphrase, “Yabba Dabba Doo,” on a nearby embankment. Barney and Betty Rubble are here, too. An astronaut stands on the lawn next to oversized mushrooms in blue, red, and green. There’s also a woolly mammoth, a Teenage Mutant Ninja Turtle, and a fish, suggesting the philosophy at play was “design like no one is watching.” 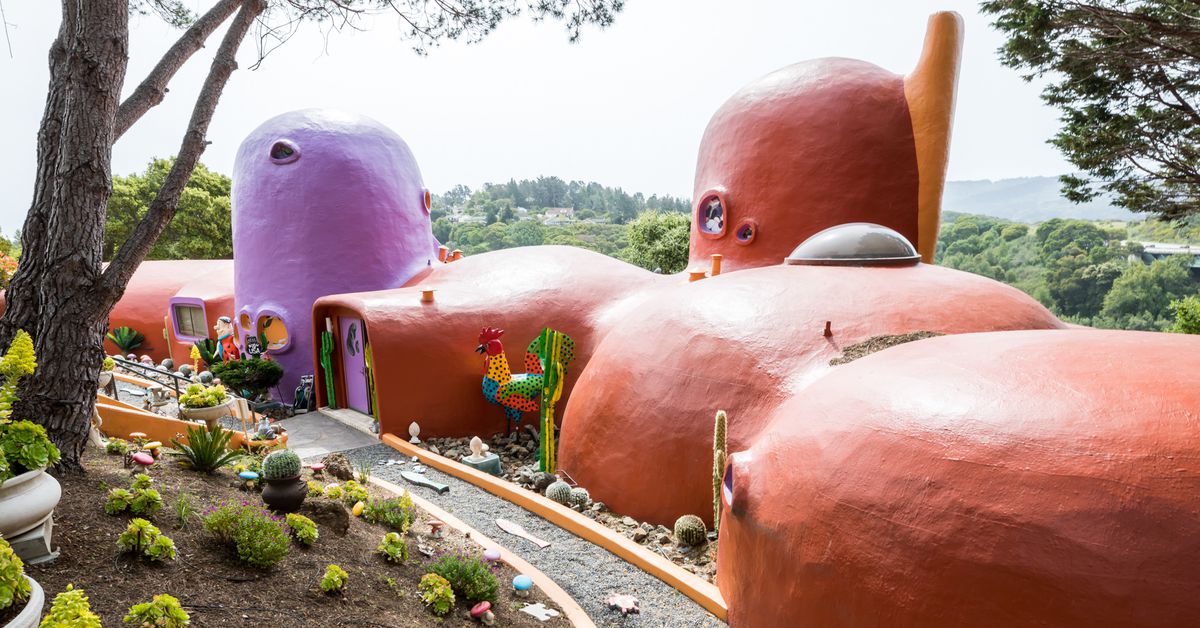 Yabba Dabba Redo: A look inside the Flintstone House

That’s a bit tacky. If I was going do a shotcrete dome-y structure, I’d make it look like a giant toadstool. And then I’d decorate the yard with 6’ tall lawn gnomes. You know, tasteful. (Except for the Caganer one taking a dump, but that’s traditional.)

Us Europeans instinctively recognize it as a Barbapapa-dwelling: 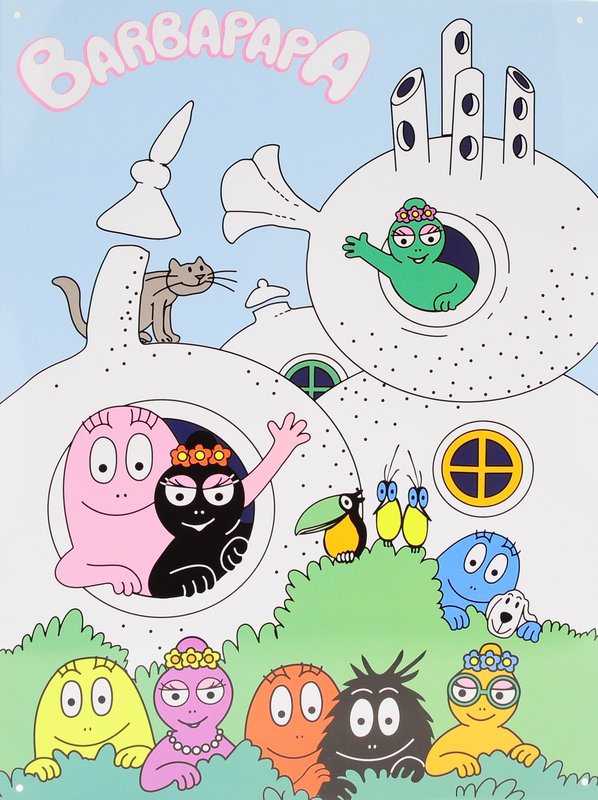 It looks like the majority of her unique landscaping style is only visibly from the air. The city should lighten up.

This is not a uniquely American thing, i have an aunt that lives in Sweden and her neighborhood has a historic protection so there are a lot of rules of what they can and can’t do. Everyone has to have city approved paint colors, windows, etc, etc.and it’s not terribly different from what an HOA would do.

I do get the purpose of a homeowner’s association, and to some degree i’m for it. However expectations rarely reflect reality, where HOAs end up being way more of a nuisance.

Given what the slope looks like and the fact that the dinos seem hidden by the house and the landscaping - not sure how it’s an eyesore to the public.

She should move them to the front of the house. I kid.

Give me a break! 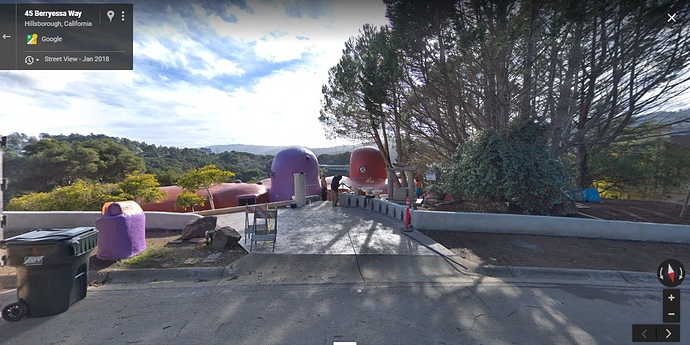 From a street below the property:

I don’t see a problem and quite frankly wish one could see more not less.

i’ve had this discussion just this week. i live in an old neighborhood, with relatively small homes close together. i actually know almost every single one of my neighbors on both sides of the street on our block, and we all live close enough to each other that we just deal with each other as, you know, neighbors – if one resident can’t shovel or keep up with maintaining his lawn because he’s elderly, the rest of us take turns shoveling his walk for him, or one neighbor’s grandson has been charged with mowing his lawn, and he pays the kid for it. we don’t call some overseeing agency to fine him or something. i rather enjoy that i don’t know for sure if the new neighbors are going to paint their house taupe or purple, or decide to convert their front yard to edible gardens with a chicken coop. it’s THEIR house, let 'em do what they want as long as it’s not going to affect overall property values for too long. i have a friend in an HOA neighborhood who lent us some folding chairs for a party, and when i returned them, she happened to not be home i had to lay them flat and out of sight from the street, or else her HOA was going to fine her. they aren’t allowed to have “chairs visible from the street” on their porch. i mean, what the FUCK.