She’s not signing it, reports Ars Technica, to please tech lobbyists hired by firms such as Apple and Microsoft

There’s a belief in the political pundit class that ‘nerds don’t vote’. i personally know that to be not true in specific; yet, sadly not sure about statistically. That is, political manager: “so Governor, do you want three million in campaign contributions or a hundred votes from electronics fan boys?” -sigh-

Well, even if she does pocket veto it there’s always a chance it’ll still go through when it comes back, so long as two thirds of both the assembly and senate vote in approval and if the numbers that brought it to her desk hold for that revote it seems like a winner.

Her “pocket veto” of the law…

Her pockets are too full already.

Need to start the impeachment talks…

“What everyone wants” has proven to be irrelevant in the face of corruption.

I was wondering if the state legislature could override the pocket veto. From https://www.nysenate.gov/how-bill-becomes-law-1 , it depends on the timing of when the bill was submitted to the governor.

While the Legislature is in session, the Governor has 10 days (not counting Sundays) to sign or veto bills passed by both houses. Signed bills become law; vetoed bills do not. However, the Governor’s failure to sign or veto a bill within the 10-day period means that it becomes law automatically. Vetoed bills are returned to the house that first passed them, together with a statement of the reason for their disapproval. A vetoed bill can become law if two-thirds of the members of each house vote to override the Governor’s veto.

If a bill is sent to the Governor when the Legislature is out of session, the rules are a bit different. At such times, the Governor has 30 days in which to make a decision, and failure to act (“pocket veto”) has the same effect as a veto.

With a bill as popular as this one appears to be, they could resubmit it next year when the legislature is back in session, and then even if the governor chooses to veto it, they would be able to easily override it.

All I wonder is how cheaply she was bought. It’s never as large a sum as you’re postulating, precisely because there’s no plausible deniability about the obvious bribery.

Well, even if she does pocket veto it there’s always a chance it’ll still go through when it comes back,

Will that happen? The clock is about to run out on the session, and depending of New York law, when that happens, everything that hasn’t made it to law dies on the spot. Then it’d have to be reintroduced in the next session.

I can’t pretend to be an expert on the NY legislative process so your reading is as good as mine. But from what I’m seeing the pocket vetoed bills just get brought up next year and a decision can made to override the veto via the two thirds rule.

There’s but a single silver lining if she doesn’t sign: the inevitable Louis Rossmann video ripping her a new one.

I wish we lived in a world where such obvious corruption would be a career-ending mistake. Right to repair may be the sort of thing everyone wants, but not everyone cares enough to notice when they don’t get it.

I have a Maker Faire tee shirt somewhere that says: 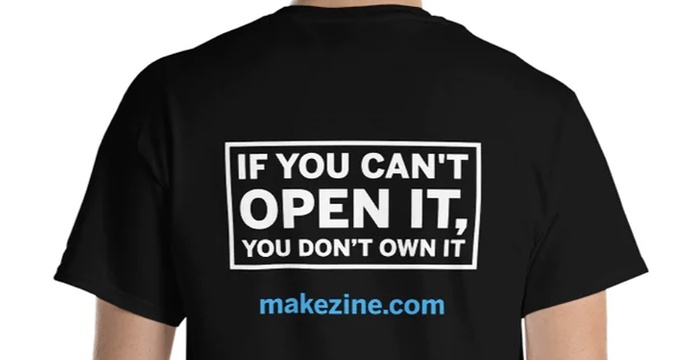 Better said than I.