Whelp, that’s done, then. I’m going to have to build one of these for myself.
I guess I’ll just get started on my Adafruit order, then…

Hmmm, a system that takes formatted requests, dives into an organized repository of information, and returns the requested formatted text…It’s almost like it’s an elaborate metaphor for…something. I can’t quite put my finger on it…

Why are all the bookshelves in that picture empty?
Bizarre…

A “series of tubes”? Like they used to use at the Library of Congress. http://pneumaticpost.blogspot.com/2015/04/librarys-keynote.html

Link to the PR

Someone please stick a GoPro on one of these!

I went to the Seattle Public Library main branch during it’s grand opening week. They had a similar concept going, but with an entirely different method - two conveyors facing each other with the books squeezed in between. It’s pretty neat - here’s their page on it, complete with terrible flash video (actually interesting and worth watching, if you’re into this kind of thing) [edit - can I post a link? http://www.spl.org/locations/central-library/cen-building-facts/cen-book-handling-system ]
When I was there (maybe day 3 of operation) they were still working out the kinks. There was a book stuck with it’s cover flipped open. The conveyors, still running, were ripping one page after the other out and raining it down on the crowd like some sort of performance art piece.

When I was a boy, I couldn’t decide whether I’d end up driving a train or working in a library. Forty years too late, I now know what I want to be when I grow up.

Once again, Japan is way ahead of the curve…

I’ve been to a sushi-go-round restaurant in Towson, MD. 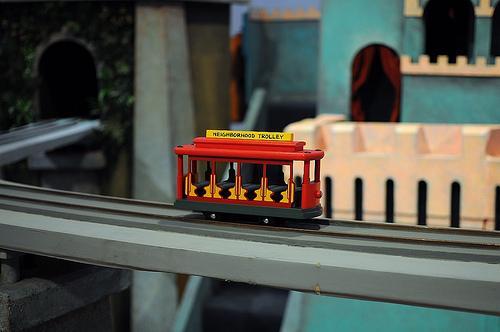 I feel like they missed an opportunity here. They could have had individual cars shaped like trolleys that communicated with people using a short series of cute whistles, ala Trolley from Mister Roger’s Neighborhood.

Seriously, @doctorow, how hard is it to link to the press release?

No video of it working?

My alma mater NC State has a really interesting book system at the recently built engineering library. It doesn’t have the little trolleys though since it was built with the robotic storage in mind. There are 3 or 4 rows just like the one in the video side by side.

Sounds cool, but your link didn’t come through.

Aw, geez, now I can’t stop thinking about how to do this sort of thing with an HO scale layout. Fabricating all that U-channel would be a serous PITA. And I’d love to get a closer look at how those wheels engage the track! The vertical runs look like they need some serious torque.

HO is probably too small even for paperbacks…