Tired of hearing that name. It’s run us over too often. Urge to grab things and hulk out rising.

Weird what sport does.

Bright blue for facial shading was not a good choice.

Now let’s get over to that dude’s house and taste the rainbow. Something has to be done with all those skittles. I’ll bring corn chips and salsa.

Well, that was fun.

I called the Seahawks - Broncos matchup in Sep, didn’t expect this result though.

I live in Lake Hills neighborhood in Bellevue and it sounded like the 4th of July and New Years Eve all rolled into one here. Fireworks, horns honking, random whoops and screaming. People from one block were screaming out “Sea” and some party on the next block would answer back “Hawks”. I’ve never heard anything like it! Pretty freakin sweet!

Marshawn is a real name? Looks like his parents couldn’t decide:
“I want Marshall”
“No, my grandpa name was Shawn”
“Marshawn it is then”
“Fine”

Yeah, yeah. It’s pretty easy to win a game when the other team is secretly replaced with a Pop Warner participation trophy winner. “Let’s see if anyone notices…”

Actaully, I take it back. I’m glad we lost the Superbowl. I forgot about all the morons that like football: With shouts, cheers and fireworks, Seattle residents celebrated a dominant victory in the Super Bowl — the city’s first major sports championship in more than 30 years. 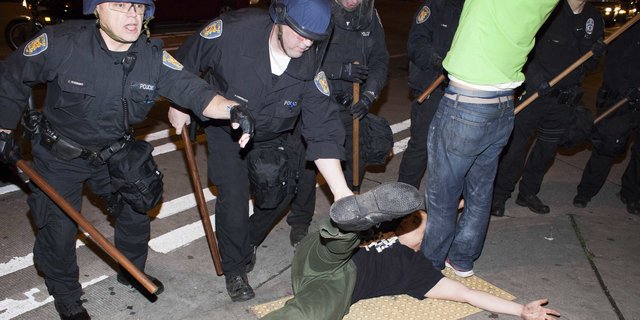 Things got a little out of hand after the game.

I think Denver won by losing the Superbowl.

Yes, a lot of morons like football. Yes, some damage was done during the celebrations in Seattle. Has there been a city in recent memory, who won a big sports championship, and this kind of thing hasn’t happened? To a greater or lesser extent? Seems to me the celebrations were relatively tame around here.

Read all about it on the Seattle Times blog:

UPDATE: 4:30 p.m., Feb. 4 | The crowdfunding for the pergola repair says it has reached its goal because the Western Washington Honda Dealers say they’ll contribute $10,000.
With the $16,046 from the crowdfunding that was reached by 4:30, that will meet the initial repair estimate by Seattle Parks of $25,000.
The repair money will be dispersed by the Seattle Parks Foundation. It says any money leftover will be used to clean up and repair parks around CenturyLink Field…" etc. etc.

Has there been a city in recent memory, who won a big sports championship, and this kind of thing hasn’t happened?

Ok then, a lot of morons like organized sports. And, once again, I’m glad we won by losing the Superbowl. Denver doesn’t need riots even if by your standards it was a “tame” riot. It’s not worth it to me. If sports fans can’t control themselves at the expense of everyone else, then fuck 'em.

Has there been a city in recent memory, who won a big sports championship, and this kind of thing hasn’t happened? To a greater or lesser extent? Seems to me the celebrations were relatively tame around here.

Toronto won the Grey Cup last year (edit: the year before last, I keep forgetting it’s 2014), and was pretty tame about it. And before anybody starts getting on me about the CFL not being a major sports league, they almost matched the MLB for average attendance last year (and handily defeated the NHL and NBA, if you look down at the indoor sports section of the same wiki link). Ok, sure, they’re not as “big money” as any of the big 3 sports, but it is a surprisingly well loved league.

Having said that - if the Leafs ever win a Stanley Cup again, this city may just get burned to the ground.