Nitrogen triiodide: "So volatile that a mosquito landing on it will make it explode"

That it is. One of the fun but dumber things done in my engineering school days was one of the chem majors making some though only like a 1/2 tsp at a time. Walking over the crystals and making them boom was fun but it was also a surprising amount of force felt through our shoes.

Fly paper. Fun stuff. Paint a (very) tiny bit on a door jam or drawer lip for a fun prank. Or, go the classic insect cruelty route and put a thin film of honey on some wax paper and place very small dots of the liquid randomly on the paper. Place outside before it dries and watch the fun as you wipe out your local fly population.

Thanks for posting this. I wanted to make this in high school, but lack of resourcefulness kept me from getting the necessary components. Glad I didn’t. I knew at the time that it was sensitive, but did not understand how sensitive.

You may also enjoy Derek Lowe’s Chemistry Blog, namely the Things I Won’t Work With category. I thought he might have talked about NI3, but it seems not. I did find this pretty picture, though. 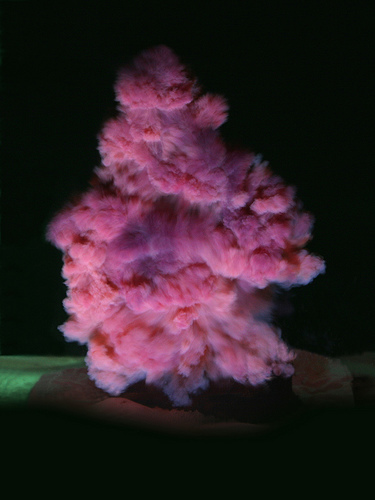 Probably a naive question on my part, but how does he manage to place it safely?

You put in on wet and let it dry, the crystals form as it dries and as soon as one crystal breaks they all go off.

You place while still a bit wet and therefore reasonably stable, that’s how we got it all over the floor.

Gotcha! That makes sense. Thank you.

Memories… Todo: prepare some, for the old times sake…

Also, the thing releases iodine that makes telltale stains. These are easy to remove with sodium thiosulfate solution.

This used to be a classic chem prank- paint a bit of nitrogen triiodide on the floor (real sneaky people would have it in the grouting of the tiles), then see your target walk onto a suddenly explosive corridor. Then someone discovered exactly how harmful inhaling a bunch of elemental iodine was, and that was another fun thing off the list.

It was a standard experiment in our high school class – the teacher encouraged us to go around painting stuff with it. (that stopped when the principal’s doorknob got the treatment)

Nitrogen tri-iodide: the bane of every high school chem teacher. We used to paint it (wet) on nickles and leave 'em in the hallway. Such pranks are why crystalline iodine is no longer sold in pharmacies and is now on the DEA’s restricted list along with many of the other ‘best’ chemicals in my 2nd grade Christmas present chemistry set. Next Trick: time fuse with glycerine + potassium permanganate! (purple jet flames, cool)

Or remove the black stains with just the ammonia water used to make it in the first place.
Oops … misplaced entry, sorry (re: stain removal – usually from fingers)

Such pranks are why crystalline iodine is no longer sold in pharmacies and is now on the DEA’s restricted list along with many of the other ‘best’ chemicals in my 2nd grade Christmas present chemistry set.

Luckily it is pretty easy to make from iodide and hydrogen peroxide.

A feather works, too.

I logged in to tell of the crunchy-floor effect, but I see that has already been covered. Tiny specks of the stuff on the bench and the floor, because who ever does that reaction under the fume hood?

… to make from iodide and hydrogen peroxide.

I’d think you’d tend to get iodate/periodate from that one… prolly wanna measure it carefully.

I’d think you’d tend to get iodate/periodate from that one… prolly wanna measure it carefully.

I think peroxide is not that strong oxidizer. In stoichiometrical amount certainly, as the iodate would react with the iodide.

Random thought. Could the reaction endpoint be sensed electrochemically, or using a redox indicator?

I think this is probably too tame for Derek Lowe to be concerned with; most of his blog subjects are horrifically toxic or explosive or both.

I have a vague recollection of creating flash paper in junior high by soaking iodine crystals in a potassium permanganate solution, then filtering out the crystals; the resultant filter paper was very volatile once dried. The leftover crystals then could be rolled in tissue paper to make whippersnappers, the popping bombs you threw at people’s feet.