If the targets had been anyone except furries, the angle on the news story would have been Terrorism.

It is terrorism, but because the targets are a weird minority (who are suspected of all being sexual deviants) that message gets diluted by all kinds of tone-deaf jokes.

I really don’t get the furry hate. I’d rather hang with furries than dude-bro’s any day of the week. The first time I ever interacted with the subculture was when I had to make up some anthropomorphic goat costumes. I went to several fur suit blogs, and asked the folks that did it best. They were super nice, and gave great advice. It felt like every other maker forum I visited. We swapped suppliers, sale prices, and build techniques. I liked them.

So this is a terrorist attack on american soil, and I’m only reading about it now? WTF.

I really don’t get the furry hate.

Me neither. It’s not like doing anything really weird like dressing up in rubber and jumping off perfectly good boats, or wearing tasteless clothing while paying to hit little balls with sticks into a lake or sandpit.

Disclosure: Yeah, I do both. Don’t judge me.

I think Gawker had a story the day it happened. And they pointed out that MSNBC’s morning show made fun of furries…

I’d suspect this is internal Furry Drama gone very wrong. There just isn’t that much external furry hate any more - even Something Awful got bored with it. Back in 2000 it was ‘omg how can such freaky perverts exist?’. Then everyone got on the internet and learned that furries are way, way down the internet scales of freakiness and danger. (Apparently they’re also much better behaved at conventions than salespeople or religious types.)

Every subculture has Drama (seemingly the more trivial the issue the more vicious), so it seems more likely that would escalate enough to do something so awful now. But either way, I hope they find the a-hole.

Of course the media coverage has been terrible all around. Except a few places like Kotaku. The author (Plunkett) even made a call for people to consider the seriousness first before making furry jokes in the comments - not entirely successful, but probably improved things.

A bit surprised it took this long for the topic to show up here.

I wasn’t even there, but I’m already dealing with aftermath. Let’s just say that someone I know probably developed PTSD as a result of the incident, and shit’s already taken a pretty bad turn for him.

There was the whole “Burned Fur” business in the – what – late '90s? I think that was the first time I truly grasped that the universe is subcultures all the way down to the subatomic level.

Have you heard if anyone knows anything about who did this?

Have you heard if anyone knows anything about who did this?

No. It was probably the work of some dumb kid (“kid” being a frame of mind here, not a biological age) doing something for stupid reasons. The “fursecution complex” never went away, so everyone wants to believe it was done by an outsider, but I have reservations about that.

I used to run larps a few years back, and did the plot department’s costumes when they needed something.

At the moment no one knows what the motivation was behind this incident. Might not be a furry-hater; it could just as easily be someone who wanted to cause some chaos, and coincidentally chose a time and place that made it look like there was an association. Maybe they intended to release the chemicals somewhere completely different, and goofed up.

Something that most of the articles don’t mention is that the whole hotel evacuation process went pretty calmly and smoothly. Over many years and venues, this particular furry convention has almost always had the fire alarm go off each year, so everyone was used to filing outside. Only this time it was for real, not some idiot opening a fire door or trying to light up somewhere.

Here’s a first-person account from one of the people who was close to the release point:

I was on the ninth floor of the Hyatt at MWFF 2014 during the attack, coughed up...

Hello, everyone. Kamunt Kurush here. So...it appears that word about me has spread far and wide already, due to me being part of the "Rosemont...

Seeing as its furries… its probably just a jilted lover trying to get at someone’s new boyfriend rather than terrorism.

The first-person account is very detailed and well-worth reading. At first I thought it was just a lousy Drano bomb but this is bigger. Looks to me like it was an uncontained deposition of hypochlorite bleach powder, mixed with something that made it releasing chlorine, in amount that’s bigger than trivial.

Picture from the original account, presumably of the gas release site:

Edit: After reading some of the comments, the site image is after cleanup and decon. Glass shards were mentioned but not shown on the image. So my hypothesis is that it was either an open vessel, or a bottle bomb but of somewhat unusual potency.

I sort of picture Bevis 'n Butthead with a bucket of pool chemicals and assorted cleaning products, getting more of a reaction than they expected.

The gas attack was at my local convention center (maybe a mile from my old office).

Here’s a great example of what you’re talking about on the local news: 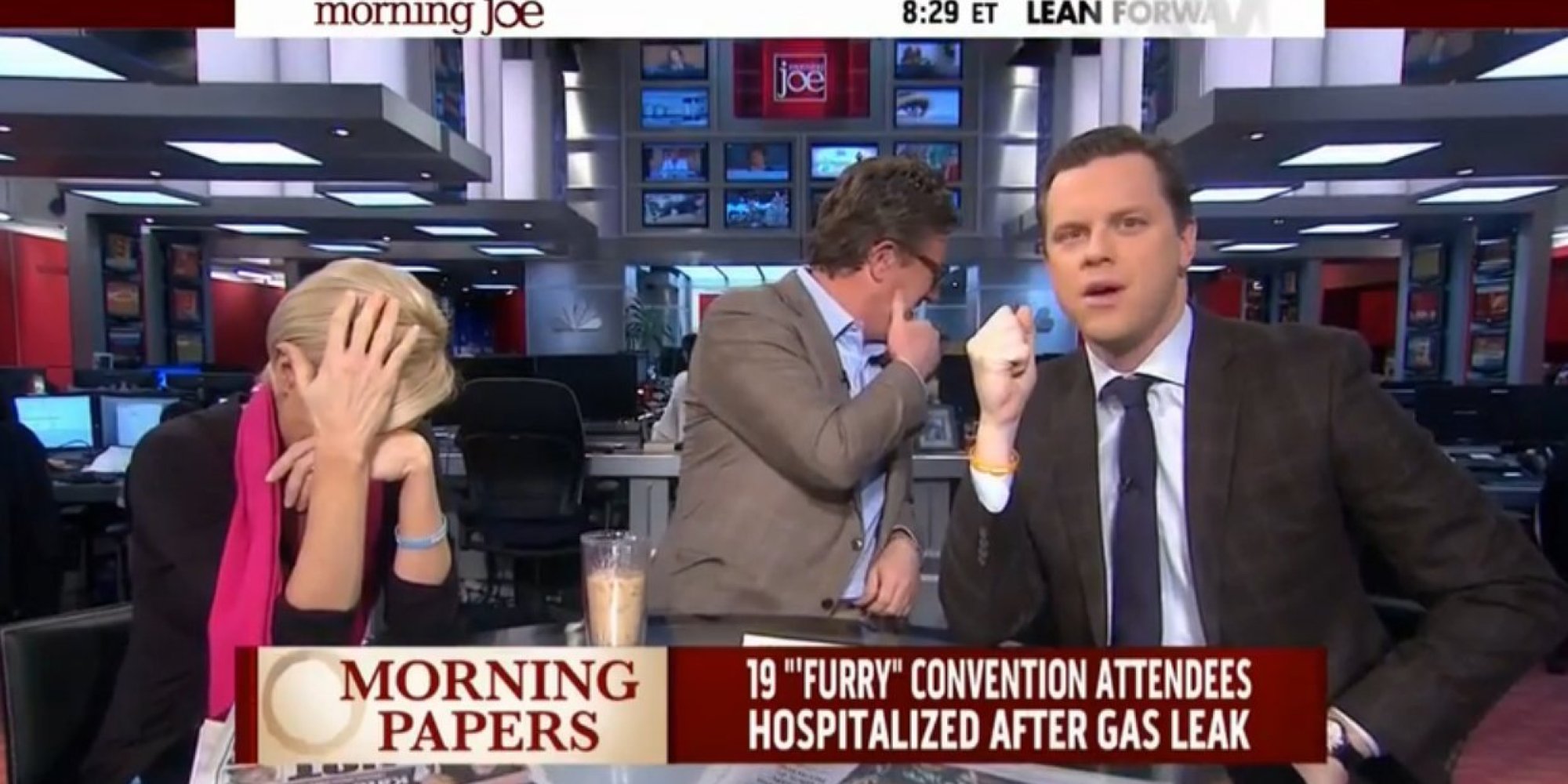 Mika Brzezinski Just Found Out What A Furry Is

Mika Brzezinski just learned what a furry is. During a segment on M...

To be fair, news reporters have been known to react inappropriately on air before when they´re taken aback by something. If you´ve ever heard of a furry before and have this serious story in combination with the ridiculous visuals to report, the cognitive dissonance could easily be enough to make you laugh involuntarily. I don´t suspect bad intention here.