North Korea just published this list of 310 weird new patriotic slogans. What do they mean?

I suspect that these slogans are akin to the useless “mission statements” that teams of employees are occasionally tasked with creating to describe their department’s work.

It gives busy-bodies and frustrated lifers a chance to express themselves (and maybe get an extra hour of work away from their desks and maybe donuts!), and gives management a warm fuzzy because they feel like they’ve empowered their “reports.”

I mean, you’ve got this whopping big bureaucracy staffed with important people’s relatives sitting around in huge wedding-cake style office buildings; you may as well give them something to do to earn their extra 5 kg of rice each month.

“Let this socialist country resound with Song of Big Fish Haul and be
permeated with the fragrant smell of fish and other seafoods!”

Ooh, good idea. I bet if enough Happy Mutants chip in we could have a poster for every one of these slogans within an hour or two. 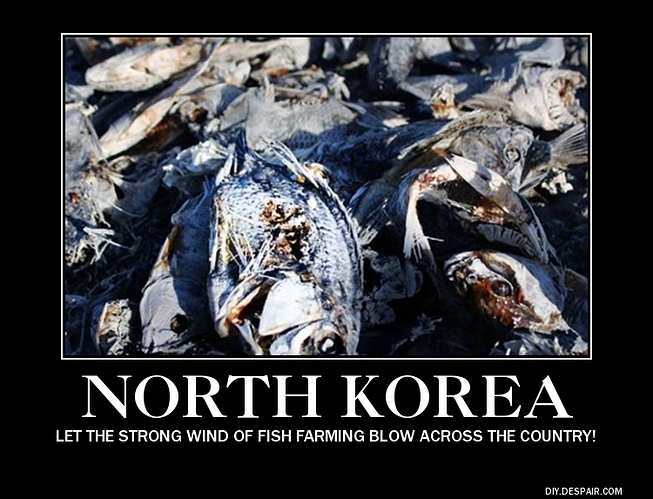 We serve the people!

I think this was an episode of The Twilight Zone.

I bet their moderators are real interesting characters.

When their “don’t push your luck” dragon eats a troll, actual knives are involved…

• Accelerate the work to make the railways heavy-duty, high-speed and IT-based!

I have literally been telling this to people for years.

There seems to be a theme of “fed shit and raised in the dark.”

Also, “The future is a great big fish.”

Dibs on “Socialist Fairyland” as a band name.

protect our wise and patriotic generals from gravity accelerated anvils

Perish is invited with lacking of thirty-seven pieces of flair.

I suppose it’s just because of the article title, but I can’t help feeling that a perfect opportunity was missed to slip “Double rainbow all the way” into the middle of the list.

Hey, Kim-Jong, I got something you can “blow across the country” right here.

Awake, ye sons of the Motherland!
Taste no more the wine of the sour apples
Woodsmen, grasp your choppers!
Farmers, slaughter with the tool formerly used for lifting beets the foe!
Frustrate the endless wiles of our enemies
We into the darkness march singing
Against the whole world in arms coming
But see the golden light upon the mountain tops!
The new day is a great big fish!

Proving once again that Monstrous Regiment is the greatest Discworld novel. 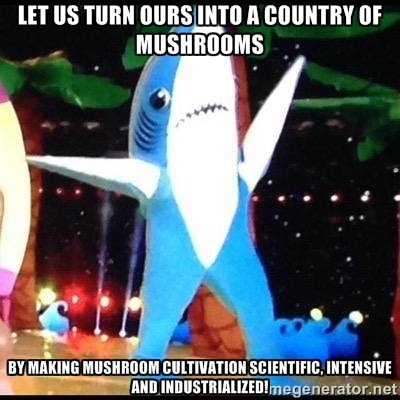 Teacher:
“Good morning class, today I am going to pass out blank cards that you will write your national sayings on. At the end of class I will collect them. The best saying will get a picture of our fearless and holy leader Kim Jong II”

But for me, a good deal of the fun was never in the topic when I thought about all the people that have to live with the reality of that dictatorship for their entire lives. And since we’ve lost our democracy here in the US (we’re actually classified as an oligarchy) we might want to start memorizing a few insane-sounding slogans ourselves.

In defense of North Korea, their language (like many in Asia) were heavily influenced by the use of Chinese characters. More technical and florid vocabulary is often expressed in a few concise syllables. I am sure these phrases are slightly more pithy in Korean.

I think the key is you have to read them similarly to the way Americans read fortune cookies. With the phrase “…or we will kill you” tacked on at the end.

Perhaps the only rational sentence possible beginning with “in defense of North Korea”.