Norwegian supernatural thriller The Innocents one of the best this year

Originally published at: Norwegian supernatural thriller The Innocents one of the best this year | Boing Boing

Domu is a fantastic manga, if you can find a copy. Stoked about this!

If it is any good as Thelma, I cannot wait to watch it. Thelma had me entranced. I could not stop watching it. A little like Babadook.

Village of the Damned?

The title. The genre. For a second I thought it was going to be a new version of this classic: 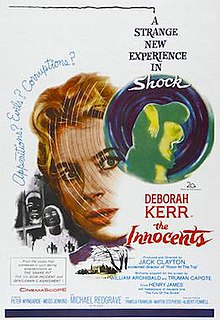 The Innocents is a 1961 gothic psychological horror film directed and produced by Jack Clayton, and starring Deborah Kerr, Michael Redgrave, and Megs Jenkins. Based on the 1898 novella The Turn of the Screw by the American novelist Henry James, the screenplay was adapted by William Archibald and Truman Capote, who used Archibald's own 1950 stage play—also titled The Innocents—as a primary source text. Its plot follows a governess who watches over two children and comes to fear that their large...

Yeah, it’s not the Midwich Cookoos or Turn of the Screw at all. Poor title choice if you ask me and understandably confusing. The plot of Domu has police investigating mysterious deaths at an apartment high rise. There’s an apparently senile old man with psychic powers, and a young girl with powers who fights him. Themes later developed further in Akira. The English translation of the manga is currently OOP. I’ve been trying to replace my flood killed copy for years

Be aware that there is some deliberate animal trauma, if that kind of thing upsets you, as it does me.

I streamed this here in the UK and you’re right, it’s outstanding. Speaking as someone who taught kids for many years, the unsettling depiction of how one creepy kid can affect others and guide them to cruel behaviour really rang true. What makes this movie so disturbing is the way it presents the banality of evil so believably - and in such a quietly devastating manner.

Eskil Vogt on The Innocents