Notes from the #MeToo march: thoughts and prayers can't right what is wrong

Victim blaming is bad. Victims self-blaming is understandable. Standing in front of a crowd of victims and telling them that they’re to blame… facedesk

I went through a lot of church, it seriously messed up my social development and took me a lot of years to get over, but of all the you-are-powerless messages they fill you with, “It’s all part of god’s plan” (and all the airy-fairy spirituality bullshit versions thereof) is the one that makes me want to puke blood the hardest!

Jim Turner says “…if you’re white & male, why don’t you sit down and shut up for a while? Sit down right where you are, and shut up…You’re very clearly the bulk of the problem. If you’re white and male and not doing those things, it’s okay to just sit still and shut up anyway.”

Fuck up Jim. Some of us white males have been abused too. You want me to sit down and shut up because I look like my abusers?

Sure, that kind of generalising bullshit can come from people as well-intentioned as those purveyors of spiritual nonsense in the article - but it’s still bullshit and just as counter-productive.

Eve Ensler says “I am over the passivity of good men. Where the hell are you?”

Well, those men who listen to Jim (victims or not) could be sitting down and shutting up.
I just hope Eve’s call to action drowns out Jim’s call for general silence.

(Thanks for the rest of the article though.)

In fairness, I believe it was intended not only as a rebuke to offenders, but also to the #notallmen and mansplainers who love to jump in when they read or hear anything that suggests #menaretrash.
I really believe he is not talking to us (fellow victims). Yes, we can recount our experiences, but the moment when we attempt to control the message (from women) is exactly the moment we need to sit down and shut up.

Sure, I get that may be his intent but that’s not what he said.
And even if he did put it that way, precious few who need a real lesson in abuse, partiarchy, or the nuances of when it’s wise to let other voices be heard are going to suddenly be converted.

edit: sorry about the anger underlying that past post - I’m normally better at witholding a comment when I’m angry.

now I get to feel uncomfortable about aiding it’s current domination by “white male” voices.

Imagine feeling ‘uncomfortable’ in your skin for the majority of your whole life; not just because you’re the ‘wrong gender’ but also the “wrong color.”

also to the #notallmen and mansplainers who love to jump in

That’s a huge part of the problem that Jim Turner was trying to address; that impulse so many guys have to just try to take over the entire conversation, or to cherrypick it to death, or to marginalize the severity of the issue.

edit: sorry about the anger underlying that past post - I’m normally better at witholding a comment when I’m angry.

I’ll be happy when it’s socially acceptable to punch Predatory Patriarchy, and not just Nazis as a subset.

Imagine feeling ‘uncomfortable’ in your skin for the majority of your whole life; not just because you’re the ‘wrong gender’ but also the “wrong color.”

I somtimes fail to acknowledge the weight of white male entitlement behind internet comments…please don’t read my first post through that lens.

He could have couched it better, but many people are just over walking on eggshells so as not to upset the status quo; the one where everything revolves around keep the straight, White, rich, supposedly Xtain male happy, at the expense of everyone else’s comfort and safety.

And yes, many times ‘everyone else’ includes children and even other men who may be vulnerable to predatory behavior.

I’m all for outing white male privilege where it exists but skin-color seems to be a dodgy criteria with which to call out perpetrators of sexual harassment and abuse.

Sex would be a better metric but “power-over” seems the best. Of course with so many countries and institutions founded upon patriarchy and white-supremacy, power will tend to find itself in the hands of…oh…ok.

I seemed to have talked myself around to some sense.

Being women did not prevent the ones opening up the ritual, from deeply misunderstanding what the protest is really about. (And face it, every street protest is going to attract people who simply don’t get it, that is what distinguishes street activism from other forms of activism.) Being male shouldn’t exclude anyone from understanding (or commenting on) the issue.

What maleness does (the way I see it) is raise the bar quite a bit, on what a guy can expect to get away with saying, compared to just about any other topic one can discuss in the internet,

For the first few days of this, I pretty much assumed that the only thing I could talk about -and get away with- are the times I’ve acted badly around women. I don’t have a huge list of such moments, but they make me want to listen, to pay attention, to really try to absorb the hugeness of what’s being said.

Some women have expressed a dsire to only ever hear from other women, about this topic. They don’t really want to hear what kind of abuse men have recieved from other men. The thing about breaking silence, is you don’t always get to choose which silence gets broken, and what silence remains.

But it was reading the account of one such male victim in Hollywood, that knocked a memory loose that I’d long ago decided was unimportant, the harassment and (yes, once) assault that I’ve received from gay men over the years, and does that matter, in the big picture? Not wanting to make a big deal about it, not wanting to appear homophobic or provincial in light of all the civil rights gains that gay men have been making?

It’s suddenly not so hard to imagine, anymore, the kind of pressure that women talk about, to blow it off, to not make waves, to pretend it doesn’t matter. And in my case certainly, being a victim did not prevent me from turning around and becoming a perpetrator.

That’s a huge part of the problem that Jim Turner was trying to address; that impulse so many guys have to just try to take over the entire conversation, or to cherrypick it to death, or to marginalize the severity of the issue.

There’s another tendency I have, to jump in with the idea of talking solutions, when solutions are not really on the agenda. Letting that be OK, letting someone talk about a problem without needing to jump in with a solution- it’s another hard-learned lesson in privilege.

I am one of the lead organizers of the march. Thank you for writing your truth about your experience. I understand your issue with the word choice, however you seem to deeply misunderstand the spiritual aspect of the event. Those who led the healing ceremony are Indigenous activists. Their prayer had nothing to do with religion or American religious institution. The organizers of the march intentionally included Indigenous representation, not only because #WeAreOnStolenLand and it is the right thing to do at every event, not only because the native peoples discovered effective healing through connection with the earth and with intention long before we did (we still haven’t), but also because Native women have the highest rates of rape and murder in this country. One in 3 Native women will be raped in her lifetime. It is crucial that we not ignore this shocking statistic, and that we not erase Native people from the conversation by labeling their spirituality “religion”.

What we were incensed about was someone telling a crowd of sexual assault survivors at a protest rally–some coming out publicly for the first time–that this was not a time for anger.

In this, and in many other things.

Serenity in the face of injustice is not a virtue. Anger can be righteous.

Serenity in the face of injustice is not a virtue.

Religious and superstitious proselytizers would like people to think they’re serene, but they’re not. They pretend to be kind at first, but it never takes them long to show their true menace…

Our disagreement was apparent to the speaker from the stage, and she went back to the microphone and addressed Jackie:

Did you have something that you wanted to say?

But it was not delivered as an invitation, more as a challenge.

That was a bullying threat plain and simple. Just because some adorn themselves in superficially non-Xtian spiritualism doesn’t make them any less dangerous.

“The slightly uncomfortable gaze from a co-worker. The exclusion from after-hours drinks with the guys, or the comments about how we look.”

Are these rape? Are these sexual assault? If they are, then indeed, #notallmen is a complete lie.

I’ll say it once, I’ll say it a thousand times. Anger is a PART of healing not a disease to be obliterated. It dissipates at exactly the rate you heal and no amount of praying or saying you chose this is going to make it happen faster. That being said you didn’t choose to have this experience it’s innately an experience of lack of choice, however, you chose how to survive. That’s the part that matters. I’m surprised anyone spoke at a rally and didn’t have a grasp on this. Especially if this is the first time you’ve really been angry, then you NEED to be angry.

For the record, I liked this post due to the specific efforts taken towards inclusion and the highlighting of the reasons behind it. Kudos. However, that still doesn’t excuse someone standing up in front of a crowd of victims and effectively saying “it’s all magically your own fault” and wrapping that in a cloak of spirituality does not make it in any way immune from criticism - if anything, it makes it even more vulnerable to attack.

However, that still doesn’t excuse someone standing up in front of a crowd of victims and effectively saying “it’s all magically your own fault” and wrapping that in a cloak of spirituality does not make it in any way immune from criticism

Regardless to any spiritual belief system that anyone may have, attributing the cause of rape and sexual abuse to anything but the individuals who perpetrated the violation (and the society that enables them) is both insensitive and tone deaf, at best.

Furthermore, not to diminish the plight of our indigenous sisters in any way, but that ‘one out of three’ ratio pretty much applies to all women across the board; in fact, it’s probably too low of estimate, if we’re being brutally honest. 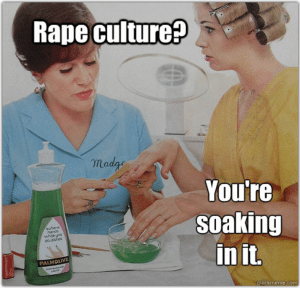 What I heard her say, was that these Native American speakers were telling the crowd that they had in some sense chosen to be abused. That would be offensive to hear, no matter who said it. And if applied to your statistic, they ware also saying that 1 in 3 Native American women also had chosen to be abused. You can split hairs about what’s religious and what’s spiritual, but that’s still a shitty thing to say at this kind of gathering, no matter how pure their intentions, or how valid their grievances