Now that telcos have "abandoned rural America," the only broadband comes from cable monopolies

I recently moved from the rural suburbs to the city and noticed that I have far more broadband options now. Living downtown now, I can choose from about 1/2 dozen providers all offering 100 Mbps speed or better for around $50/month. Some are offering 500 Mbps - and that’s both up and down speeds.

Where we moved from we had to choose either Comcast or CenturyLink DSL. The best speed I could get was 12 Mbps down with <1 Mbps up - for the same $60/month.

“Abandoned” because there was no return on investment. Rural populations simply don’t have enough paying customers to fund the infrastructure required.

The only companies that can afford to build out into 'murica are the monopolies with enough cash to do so.

Where I lived near Bellville TX there was no wire coming into our neighborhood. I was on dialup for a long time, then a ATT 3g hotspot and then Verizon Home 4g. A little faster but both came with only a few GBs a month and spotty service. Many of my neighbors had satellite. In town there was real broadband but 10 miles out you were on your own.

I was super excited to move to Delaware where Verizon FiOS is statewide and is at least competition for Comcast. Turns out the townhouse complex I’m renting in has an exclusive arrangement with Comcast. Fuckers. Customer retention people don’t know that, though, so every year I can still do the “I’m thinking about switching to FiOS” dance to get a lower rate.

Can’t we just agree that natural monopolies should be public owned and managed?

Natural monopolies were discussed as a potential source of market failure by John Stuart Mill, who advocated government regulation to make them serve the public good.

A hundred and fifty fucking years ago. Thereabouts.

And thus the Rural Electrification Act was born. It created a lot of jobs, too.

But really, I think this has a lot more to do with capitalism than with infrastructure. DSL runs over phone lines, and there are very few people without phone lines running to their house.

DSL runs over phone lines, and there are very few people without phone lines running to their house.

Mostly thanks to subsidies in the form of the Universal Service Fund. Another example of a socialist policy designed to help everyone being exploited by monopolies for private gain. Requiring ISPs to pay into the USF would promote better broadband options for rural areas. 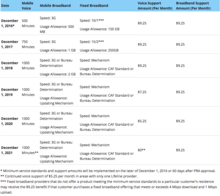 Rural Electric Cooperatives are trying to get broadband improvements into the Farm Bill:

“Promote true high-speed broadband for rural areas
The House version provides for significant financial investment in broadband development by electric co-ops and other providers in rural areas that have either no internet service or substandard service.”

“The Senate Farm Bill increases funds for rural broadband but provides only limited support for projects in areas with existing but inadequate service.”

“Deployment of rural broadband is essential to keeping rural communities competitive,” said Matheson. “NRECA is working to ensure co-op member-consumers get high-speed internet service on par with the rest of the country.”

The FCC has the power to change all this if only there was the political will to follow the lead of many other countries and classify broadband Internet as an “essential service” and allow it to fall under the purview of the 1996 Telecommunications Act. Something the current administration is unlikely to do. (To be fair, not much happened under the previous administration either. 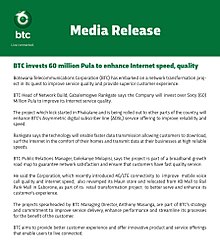 Based on a survey conducted by the United States Census Bureau in 2009 (N=50,000, unit: household), people with high incomes, those who are younger, more highly educated, Asians and Whites, and the employed, have higher rates of broadband use at home. People with low incomes, minorities, seniors, the less-educated, and the non-employed tend to have lower rates of broadband use at home. Besides, there are rural/urban differences as well. People in rural areas are less likely to adopt the Internet....

My parents’ property line is on the city limits of the largest town in their quarter of a rural, southern state. They have no broadband options. They are grandfathered into a shitty, insanely overpriced 2000’s-era DSL plan with AT&T, which they would not be offered now if they asked for it. No cable company will service them.

I don’t suppose they could get a DSL reseller to offer them service? Back when I had DSL I got jerked around by Verzion for a couple of years before I switched to Speakeasy. I don’t know if CLECs are still a thing, but it might be worth investigating. As an added bonus I got more bandwidth for less money as well as Usenet access and a shell account.

Let’s not forget that these monopolies are oftentimes created by the local municipalities or state governments. They are the ones with the natural monopoly on the poles and easements. When Google Fiber started cutting deals where they would run and maintain everything for free to the city as long as they (or anyone else) didn’t have to pay pole fees, things got crazy. The cable companies started buying state politicians to create legislation to prevent cities from cutting that deal. That’s why Google eventually decided to focus on satellite technology. The fiber isn’t as expensive as people make it out to be but dealing with a gazillion municipalities sure is.

Tried everyone except satellite in their area. When my mother-in-law was briefly living in a rural area of Michigan she had to go with satellite to be able to work, and my father-in-law was told that they didn’t have service for his address…even though there was an easement for cable poles through his property! He was able to threaten them somehow into “making an exception”.

this is why if elected:
1.) I will send the ISP management/CEO types to guantanimo (they ARE terrorists)
2.) I will nationalize the lines and provide at cost internet to the masses & add a 4g redundancy to the standard modem spec so you slip a sim card in there.
3.) I will ban certain data elements from being collected & attach heavy fines to their capture.

but who are we kidding, this platform is unelectable!

The problem is, we allow partisan politics to divide us over this issue when it should be be partisan at all.

I’m a strong conservative. I believe in free markets, and as little government interference I
the economy as possible. However, there are specific marketplaces where choice and competition do not emerge organically to establish a stable price, and put the economic power in the hands of the consumer through informed consumer choice.

Fixed utility infrastructure is one of these marketplaces, because of an economic phenomenon called “rent seeking”. For normal products that a consumer can obtain at a store, anyone can go to that store, from anywhere, buy that thing from the provider, and take that thing home with them. Ostensibly, any other company can get into the same business, and sell to the same consumers, creating market competition.

But because infrastructure is fixed in place, the provider will almost invariably place their infrastructure in the area where they believe their investment can make the most returns. When a new provider is given the choice of where to place their infrastructure, between an area where they face competition, and somewhere they do not, they will build in the area with less competition. When given the choice between high population density and low population density, they will choose the higher density area for more customers.

Recognize that this is not an evil thing, because businesses are responsible for staying profitable for their investors or they will fail, so they have to make the best economic decisions they can.

But because this dynamic leads to undesired outcomes like local monopolies in many areas, and lack of access in others, it shows that free market dynamics fail to put the power in the hands of the individual consumer in these cases, because the consumer often has no choice at all. Since the whole point of market economies is to empower the consumer through market choice and competition, this is an area where even the most strident free market conservatives should be able to look at this situation, and say, “This isnt working. We need to make some rules to mitigate these negative outcomes and empower the consumer in this exchange.”

That was the original purpose of Title II legislation governing fixed utility infrastructure. Title II gives the government at various levels the opportunity to step in and restore a stable price for goods and services where the free market cannot. it isn’t just about blocking and throttling. It’s about getting companies to invest in rural infrastructure for vital services, even to when it’s less profitable, so that things like phone, electricity and internet can be accessible to everyone.

Title II was a form of government regulation that the most hardcore conservatives cringe at, but it was highly effective. It’s the only reason power and phone lines exist outside major metro areas. We take it for granted, but many countries with large tracts of rural land like we have, have no electricity, running water or telecom services, specifically because those countries never mandated that companies providing those services make them available outside the biggest profit centers.

Even after we passed Title II, electric and phone companies did well economically. We mandated that they spend a certain percent of the money they used to expand and maintain their services in urban areas on infrastructure for rural customers. The money from their rural customers more than paid for their investments, just not quite as quickly as if those companies had been allowed to build wherever they wanted.

Our utility grid is the envy of the free world, and is part of the biggest reason we are so prosperous economically. We need to duplicate this success for our internet infrastructure. My hope is that full Title II mandates are applied to the ISP marketplace so that investment in rural areas can be secured, and so that internet traffic can remain fully controlled by the consumer.

About 25 years ago, I was renting in a Honolulu suburb. Cable came to the top of our main street, then stopped. We asked what it would cost to get it extended the 200 or so feet to our rental. 25 years ago, the off-the-cuff quote was $2000, and this was in a fairly big suburban area. It hasn’t improved any since then; my mom still can’t get cable to our not-very-rural OH house without big bucks.

Our utility grid is the envy of the free world, and is part of the biggest reason we are so prosperous economically.

Do tell. I’m always up for lively debate. Which part comes across as the most deridable to you?

On a local level to which I can speak, it sucks. This Summer alone we’ve had dozens of power outages due to faulty junctions, wires, transmitters and the usual tree damage resulting from inaction from Power Companies to clear lines.

Etc. Etc. It’s starting to feel more like a third world country rather than “the envy of the free world”.

County supers have gotten involved to raise the issue yet the problems persist.