Now: XKCD helps you visualize the time of day all over the world

I love the “rude to call” bar. That’s a great touch. Anybody who has relatives abroad should link to this.

I really want this on my wall. Has anyone ever created a clock like this before? It seems like one of those obvious idea that no one ever invented.

I imagine daylight savings changes would screw it but pretty good, though.

As somebody with relatives abroad, this is exactly what I plan on doing. My best friend never has a concept of what time it is where I am, and my mum asks me every time I call.

No, gringos, outside of 'morica it’s not cooll to call someone at 6am

Not to be all US-centric but I wish he hadn’t left out Hawaii. There’s plenty of space for it out there.

You could cut this comic out and paste it on the hour hand of any old 24 hour wall clock. Adjusting for daylight savings time would be no different than it is today, although there will always be a little disconnect with it between areas that do and do not observe daylight savings time.

Will this still work in a month’s time?

I know from Randall Munroe’s previous works the answer is probably yes, but it would be nice to know for certain.

In Druid Park in Baltimore, there’s a badass sundial in the rose garden of Rawlings Conservatory that has faces for many capital cities of the world. Highly recommended if you’re in the area:

No, but it would only require minimal adjustment. Without knowing the European examples, separating Brisbane from “most other Australian cites” is only relevant in summer - not all states adopt daylight savings. Something about the cows having to get up extra early for milking…

Really nice graphic though, and as a long-drive-long-distance caller myself I love the story.

Newfoundland got left out too. Islands tend to get ignored by Mainlanders.

You should be able to use the image code to embed the correctly-updating image anywhere (or just to bookmark it): 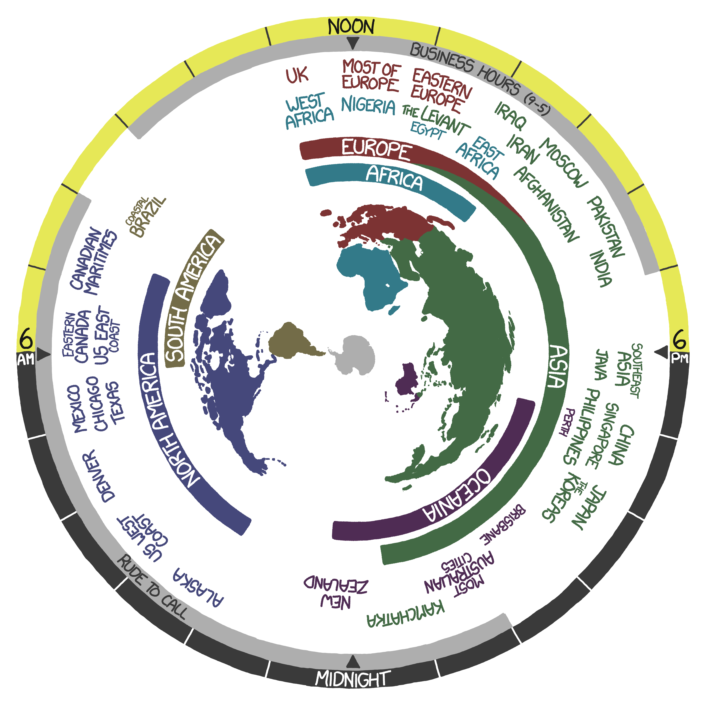 It’s coming! We need a real time one.

Odd that the Mountain Time Zone is just marked as Denver. There’s quite a chunk of the US plus Alberta and the Northwest Territories in that time zone. Not that it isn’t fun to provoke Albertans

“any old 24 hour wall clock” – the finding of which is left as an exercise for the reader.

This is almost enough. You would paste the center part (the “world”) on the hour hand but without the “time” and “time of day” rings. You would cut a smaller circle. Just remove the second hand altogether. Behind it, paste the full image, with noon at the top and midnight at the bottom. Now the world rotates inside the ring of time.

Now – this is somewhat reduced in resolution. You could make your own image, using a rectangular world map and an image editor with a rectangular-to-polar function. Note that the South Pole has to be in the middle. If you put the North Pole in the middle, you would need a backwards 24 hour clock movement, and those are impossible to find.

…and if you are feeling particularly decorative, try and find a very light grey sheet of transparent plastic. Cut a half circle with the same diameter as the whole circle, and add to your clock by putting this half circle over the 6am-6pm down to midnight side.

Now the dark side of the planet will be lightly grayed out.

If you look a bit more carefully, it’s saying it’s “rude to call” from 10pm to 8am. The big arrow at 6am is just to make it easy to find, along with arrows at 6pm and both 12s.

If somebody calls me at 6am, I assume it’s somebody on the Right Coast who don’t realize I’m on the Left Coast, and I might or might not answer incoherently.

I think its is more to do with being close to the equator. In Singapore the sun is up between 7 am and 7 pm, all year round.

They must really hate milking…

There must be a cow somewhere in Singapore but I haven’t seen it. Just like the snow in Malaysia. Its in a fridge in Genting, at 1700 metres altitude.