Now you can buy Pokemon butts

I have my very own “Pokemon butt”, so no need to purchase one.

… there don’t appear to be usable orifi…

goddamn it images in head now. curse you rule 34.

That blue and white one on the far right has some serious rectal tearing going on.

You’re not allowed to comment if you can’t even identify Squirtle.

That’s Azumarill not Squirtle… and should I be embarrassed I know this?

Wow, my kid even had a deck with that one. How could I forget? How?

I kinda miss the card game. The kid got bored of it and we haven’t been to league in years but I really found it fun. I still haven’t played x/y yet as I have been lazy about getting the new 3ds, but that is probably the one game that I would spend the most time playing on one unless they come out with a new Advance Wars.

I kind of really want a nu3DS because that means there’s games that I can get for cheap now (Pokemons ferinstance), and I probably should get another Animal Crossing for my stress levels as that game is like digital valium.

Can genitalia be far behind?

Do Pokemon eat and excrete?

Do they breed like natural animals and have genitals?

(Back when I first got cable TV, after moving cross country to Silicon Valley, I spent hours on Saturday morning drowsing on the couch and watching serial shows like Monster Rancher and Digimon, trying to figure out what was happening, as though they were SF stories that resulted from serious world-building. So I ask questions like this.) 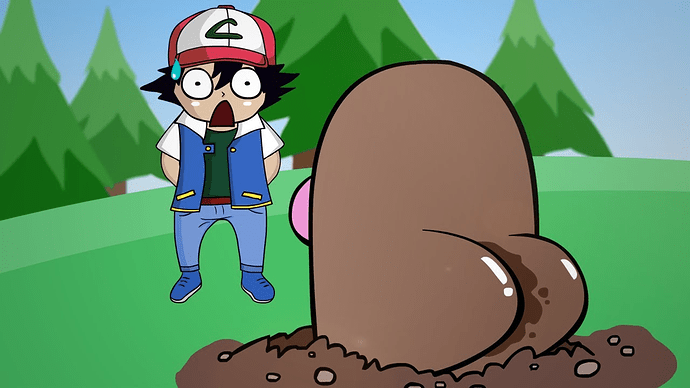 Do Pokemon eat and excrete?

Yes, they eat (and are eaten):

“Pokémon food is a broad term used for almost any food a Pokémon eats. Despite the variety of both Pokémon and Pokémon food, nearly every Pokémon will eat any kind of Pokémon food. This may mean that the majority of Pokémon are omnivorous. Several species are even capable of consuming things not normally viewed as edible from a human perspective, such as minerals, electrical energy or even dreams and emotions. Some species have been said to eat other Pokémon, or be eaten by Pokémon and humans alike, forming a food chain.” (source)

No mention of excretion, however.

Do they breed like natural animals and have genitals?

“Pokémon breeding is a method of obtaining a new Pokémon by producing and hatching an Egg. In the anime, it also refers to Pokémon grooming and caretaking.” (source)

No mention of genitalia, but they do have genders:

“Gender (Japanese: 性別 sex) is a concept introduced in Generation II, though touched upon in Generation I. In Gold and Silver Versions, most species were assigned a gender (male or female), and then, in Pokémon Crystal, a choice of male or female player characters became available for the first time. This feature allowed for Pokémon breeding, as well as introducing the concept of a Pokémon Egg to the series. Gender makes no difference in the stats of a Pokémon after Generation II, unless the two Pokémon are a different species entirely, such as Nidoran.” (source)

in Pokémon Crystal, a choice of male or female player characters became available for the first time. This feature allowed for Pokémon breeding