Nude man in doorway is not a criminal 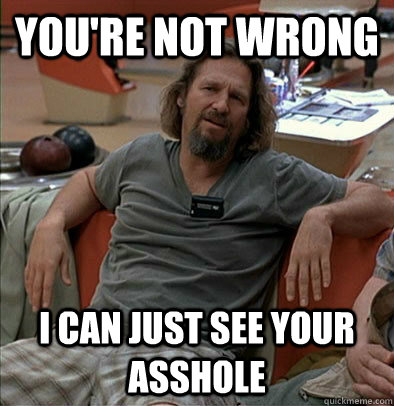 “Oh, sorry, our parents didn’t raise us right. We’ll teach our kids that the human body isn’t something to be ashamed of.”

You’d have a point if he was showing too much elbow, but we don’t get to pick the values of society-at-large. We have to live with other people, and sometimes that means going along to get along. I get that the human body is just a body and we don’t get offended by the nudity of other animals. But, we’re faced with the fact that nothing is significant without a society to give it significance. “What? It’s just the central finger of my hand? I don’t see why you’re being offended!”

If you want to wear–or in this case, not wear–the mantle of an iconoclast, fine. Just don’t get itchy when people react to that.

I didn’t see any mention of him itching or scratching.

Of course they will report this, The newspaper is the Charlotte Observer. It only got into the Telegraph because he started clicking rude messages in morse code.

The twisted thing is that people are looking at him because he’s naked. Yet - they say they don’t want to see it. So who’s really responsible for the situation?

Sometimes it’s a little like how telling someone to “empty your heads, don’t think of anything” means you’re going to end up with marshmallow goo all over the place in the end. It doesn’t necessarily mean someone wanted to think about Stay-Puft.

And it doesn’t sound as though they’re making an effort at it. There’s nothing telling them whether there is or is not something they do not want to see over there until after they’ve already looked, and even then they only know it was there last time they looked. Are they supposed to consciously avoid looking anywhere in that general direction at all times in case there might be something they wouldn’t want to see there?

(Ok, Ray did actually try to think of something harmless. I always thought Venkman egged it on, though, by actually saying “if we think of J. Edgar Hoover…”.)

This should be an album name. Possibly the cover too. I’m thinking punk, 70s prog or some smooth jazz.

I’m surprised I haven’t seen a nakedness clause in any of the HOA CC&R’s I’ve read.

How come being naked in your own house is being a jerk?

Then we all are jerks, except for uncle Steven, he still showers with that old Moscow’80 t-shirt.

At first read I thought your little story was about your parking dispute and I couldn’t for the life of me figure out what part of a car “keep the Pope under a hat” was meant to refer to.

that’s actually not true. if you are in your house you’re fine. they may give you a warning if you’re like waving it around or something. but as long as you are inside your private property, you’re fine.

Like there’s something wrong on being naked. It hurts nobody.

Because a Hawaiian shirt isn’t something that would be expected, in terms of what this particular society has determined is appropriate to display in public at this time in its existence. Sure, the rules are arbitrary, and change over time, but don’t pretend that exposed genitalia is the same as an ugly shirt, and on the same level of notability.

I have a hard time believing you don’t “get it”, either, if you’ve lived in a society where such mores are common. Or that you wouldn’t notice a nude person standing on the street any more than the guy next to him in the hideous shirt. You may not agree with the societal mores (most don’t agree with all of them), but I’m sure you understand that there’s people whose religions have a problem with nudity, people who have deep seated moral non-religious beliefs about nudity, people who have issues with their kids of a certain age being exposed to nudity, not to mention psychological and psychosexual triggers it can flip in some. AND–importantly: I’m not saying all those people’s hangups are “his” problem, or that he should be arrested. It just seems that exposing yourself, on a residential street (in evidently very clear view) is the work of someone explicitly ignoring the reasonable wishes of his neighbors… in order to be an asshole. Do you really think he’s doing it for any other reason? No, he can do it if he wants. His house. But… asshole.

By the way–are there any social restrictions of natural things that you do “get”? How about if he was obviously and theatrically masturbating? That’s natural, and you don’t have to look, right? How about if every day he took a shit on his front lawn (cleaning up afterwards, of course). How about if he was having sex with his lover on the hood of his car in the driveway every day as the elementary kids are coming home? Is this just an “I don’t get any restrictions and you don’t have to look anyway” thing with you–in which case there’s really no common ground–or do we both agree some non-onerous restrictions should exist–even if they are, ultimately arbitrary and based vaguely on current societal consensus–and should be observed in general public spaces for common courtesy if nothing else?

All the world ‘s a stage, and all the men and women merely players. They have their exits and their entrances; And one man in his time plays (with) many parts.

File this one under Sometimes Being A Jerk Is Not A Crime And Shouldn’t Be.

There was actually an English judge (Pickles) who said almost exactly this in a case before him; that people may do things which are irritating or annoying to some people, but that does not make them criminals. It was quite widely reported at the time.

Because most people are huge prudes who want to teach their children that naked bodies are shameful.

Many people in some societies.
The Masai are said to describe Westerners as “people who conceal their farts with clothing”, which they consider ridiculous. And some South American tribes handle their hot, humid environment by wearing no clothes at all.
Clothing is socially conditioned, I understand that. The question is the point at which legal intervention is required, on the slippery slope from officially approved nudity as in some German parks to Saudi Arabia. Currently there is a push back from the repressives against the 20th century, and if they win it won’t be nice.

[W]e don’t get offended by the nudity of other animals.

Ahem. I take it you’ve never heard of SINA, also known as the Society for Indecency to Naked Animals.

If the Good Lord had wanted us to be naked, he would have us be born that way.

The naked guy admittedly sounds a little creepy but sometimes, in the face of pure evil, there’s only one side you can take. If the other people on the street had a shred of humanity, they’d form a naked reception line every time this complaining neighbor walked out of her front door, just out of principle.

I wonder if one could prosecute/sue/injunct on the grounds that whereas the man is not in a public place, the photons he’s bombarding the neighbors’ eyes with are and he’s responsible for their content.

Nitpick I know, but photons per se have no content. They only start to have content if they are used for encoding a message - which is socially conditioned.